Accessibility links
Buena Vista Documentary Inspires U.S. Tour Wim Wenders' documentary about Cuban music, Buena Vista Social Club, has raised interest in the traditional son style — both in the U.S. and at home, where the film wasn't even released. 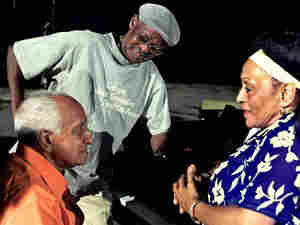 The Buena Vista Social Club CD has been a surprise hit in this country. Wim Wenders' documentary about old son players and singers is also proving popular. Now, three of the most prominent players on the disc and in the film are touring the U.S.

While the Wenders film claims that the style of music they play, called son, had almost died before the CD brought it back, reporter Reese Erlich found that, in Havana, the music had never really gone away.