Accessibility links
About All Songs Considered : All Songs Considered All Songs Considered is a great place to discover new music that doesn't get a lot of airplay anywhere else. The acclaimed (and Emmy-nominated) program – available as streaming audio, download, a podcast and a radio broadcast – features roundtable discussions about new music, reviews, live concerts, artist interviews, guest DJ appearances and more. 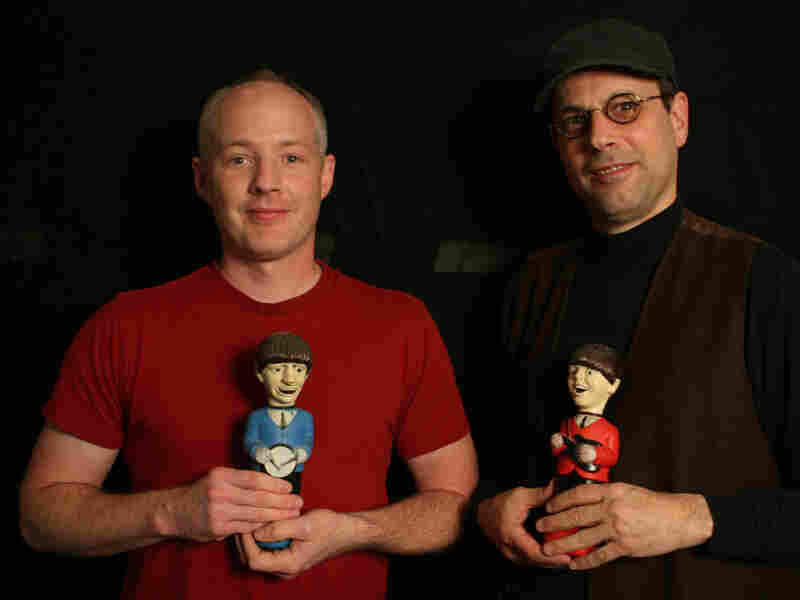 All Songs Considered is a great place to discover new music that doesn't get a lot of airplay anywhere else. The acclaimed (and Emmy-nominated, Webby-winning) program – available as streaming audio, download, a podcast and a radio broadcast – features roundtable discussions about new music, reviews, live concerts, artist interviews, guest DJ appearances and more.

Host Bob Boilen created All Songs Considered as a Web-only program in January, 2000 after receiving countless letters from listeners who wanted to know more about the music that he, as director, played between stories on NPR's signature newsmagazine, All Things Considered. Producer Robin Hilton joined All Songs Considered shortly after its creation, and the program has since grown to become one of the most popular and respected destinations to hear new music online.

Sign up for the All Songs Considered newsletter and we'll tell you when new music and other features are available online.

Subscribe to the All Songs Considered podcast to have the program automatically downloaded to your computer.

Subscribe to the Live Concerts From All Songs Considered podcast to have entire concerts automatically downloaded to your computer.

Email All Songs Considered with your questions or comments.

Read The All Songs Considered Blog

In 1988, a determined Bob Boilen started showing up on NPR's doorstep every day, looking for a way to contribute his skills in music and broadcasting to the network. His persistence paid off, and within a few weeks he was hired, on a temporary basis, to work for All Things Considered. Less than a year later, Boilen was directing the show and continued to do so for the next 18 years.

Hear Bob Interviewed On 'All Things Considered' About 'Whiz Bang!'

Before coming to NPR, Boilen found many ways to share his passion for music. From 1982 to 1986 he worked for Baltimore's Impossible Theater, where he held many posts, including composer, technician, and recording engineer. Boilen became part of music history in 1983 with the Impossible Theater production Whiz Bang, a History of Sound. In it, Boilen became one of the first composers to use audio sampling -— in this case, sounds from nature and the industrial revolution. He was interviewed about Whiz Bang by Susan Stamberg on All Things Considered.

After Impossible Theater, Boilen worked as a producer for a television station in Washington, D.C. He produced several projects, including a music video program. In 1997, he started producing an online show called Science Live for the Discovery Channel. He also put out two albums with his psychedelic band, Tiny Desk Unit, during the late 1970s and early 1980s. Boilen still composes and performs music and posts it for free on his Web site, BobBoilen.info. He also performs contradance music and has a podcast of contradance music that he produces with his son, Julian.

Longtime NPR fans may remember another contribution Boilen made to NPR. He composed the original theme music for NPR's Talk of the Nation.

Hilton joined All Songs Considered as its producer after co-founding Small Good Thing Productions, a non-profit production company for independent film, radio and music in Athens, GA. Before that, he lived and worked in Japan as a translator for the government, and taught English as a second language to junior high school students. He chronicled his time abroad with a tongue-in-cheek documentary called "Big in Japan." From 1989 to 1996, Hilton worked for NPR member stations as a Senior Producer and Assistant News Director and was a long-time contributing reporter to NPR's daily news programs.

Robin is also a musician, and has been since his parents made him take piano lessons at the age of six. He's composed and produced music for National Geographic, Baltimore's Center Stage, and the film Open Secret. He also participates in the annual RPM Challenge, to write and record an entire album each February.

Hear 'Big In Japan,' Robin's Documentary On His Time Living And Working In Japan