Accessibility links
The Story Of 'Foggy Mountain Breakdown' Earl Scruggs's song may have been the first to introduce audiences to bluegrass music. 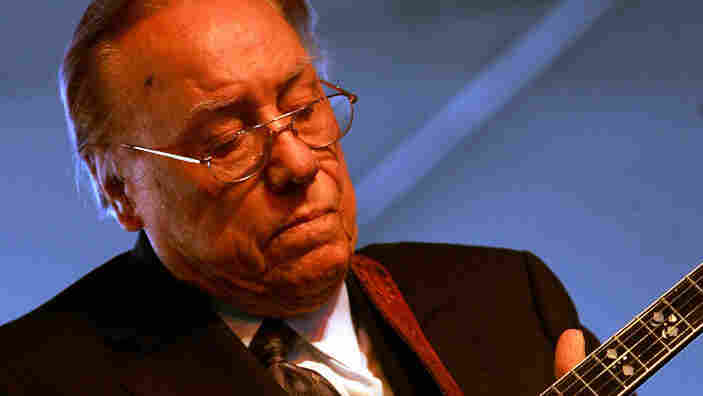 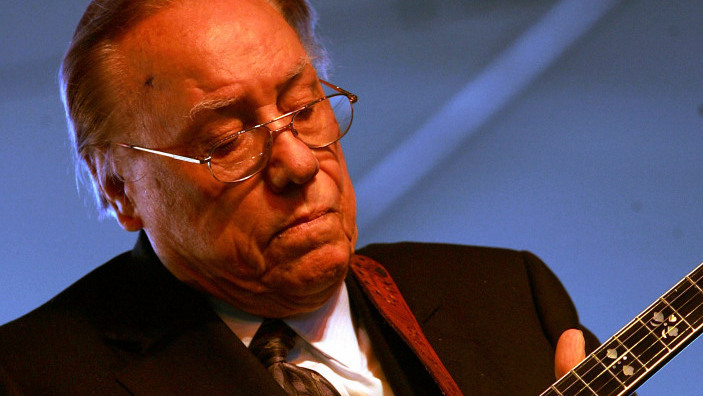 Earl Scruggs performs at the Stagecoach Music Festival in 2007.

More than any other work, Earl Scruggs' "Foggy Mountain Breakdown" established the banjo as the star instrument in bluegrass music. That song is still perhaps best known as the accompanying theme for a pair of roving gangsters in Arthur Penn's 1967 film Bonnie and Clyde. A bright and quick tune written by a quiet North Carolina country musician that introduced American bluegrass to new audiences around the world.

Scruggs is probably the best-known banjo picker in the world. And even people who don't know his name know what is called the Scruggs style of playing when they hear it: a crackling, syncopated style in which the player uses the thumb and two fingers fitted with plastic and metal picks to play chords, melody and cascading rolls of notes.

Scruggs recalls that a crisp finger picking style with thumb and forefinger or a thumb and two fingers--similar to classical guitar playing--was the most common way to play the five-string banjo in his western North Carolina hometown. He remembers when he was four years old going to his uncle's home and hearing a blind banjo picker named Mack Woolbright.

"He'd sit in the rocking chair, and he'd pick some and it was just amazing," Scruggs recalls. "I couldn't imagine--he was the first, what I call a good banjo player."

Scruggs was hooked. His father, who had recently died, had owned a banjo, and Earl started to play it even before he was big enough to hold it. He started with just the thumb and forefinger, but one day when he was about 10 years old, something new happened.

"Well, my brother and I had been into a fuss with each other," he remembers. "I'd gone into a room by myself, and I had the banjo in there. And I was, I guess, pouting. And all of a sudden, I realized I was picking with three fingers. And that excited me to no end. I was playing a tune called 'Reuben.' I had the banjo run down in D tuning, playing that. I went running out of the room and there was my brother--so sudden--I came out saying, 'I got it. I got it. I got it.'"

This was not the first time a banjo was played with three fingers. Other people--including Woolbright--had devised three-finger styles. But Scruggs found a technique that stuck. He smoothed out the rolls of notes, making them more continuous than other players had in the past. According to banjo player John Hartford, who wrote the hit song "Gentle On My Mind," Scruggs recreated African-inspired ragtime rhythms on the modern banjo. Hartford says that like ragtime pianists, Scruggs forced rolls of three notes into two- and four-beat time signatures.

The first time I heard Earl on the radio, I didn't know what to think. I couldn't tell if it was a banjo or electric guitar or if it was lightning bolts from heaven.

As a teenager in the early '40s, Scruggs left the farm where he was raised and went to work in a textile mill. But after more than two years of grinding labor and low pay, he decided to leave the mill to pursue a life in music.

"I finally got up the nerve to go into the business, and I was offered--I was making 40 cents an hour in the mill," says Scruggs. "My first job in radio was $50 a week. So I moved in on that."

After that first radio band broke up in 1945, Scruggs joined Bill Monroe's Bluegrass Boys in Nashville. Right away, his rapid-fire banjo playing started to define the sound that would later be known as bluegrass. Scruggs also says he composed a tune called "Bluegrass Breakdown," but didn't get credit for it. Monroe--with his mandolin as the lead instrument--was definitely in charge.

For Scruggs, playing with Monroe was the culmination of a dream. But he was bothered when the band occasionally hit the road late and missed shows. So in 1948, he and singer Lester Flatt left Monroe's band and soon formed the Foggy Mountain Boys. With smooth singing and Scruggs' revolutionary approach to the banjo, their band was a success from the start. They performed live on radio stations throughout the South, and recorded gospel songs and sentimental numbers, such as "My Cabin in Caroline."

"Here's where it steps out of the band, and, instead of becoming a sideman, becomes the lead instrument and the main thing," Hartford says. "This is where--in other words, this is where he makes the transition from being a backup singer to the lead vocalist. You know, like a lot of lead singers around town start out as backup singers in other people's groups and then they go and make their own record. Well, this is the first one where the banjo steps up there and becomes the star of the show. "

"The first time I heard Earl on the radio, I didn't know what to think," he says. "I couldn't tell if it was a banjo or electric guitar or if it was lightning bolts from heaven. I didn't know--it was like these notes, and they glowed and they had light in them, and everything like that. And they were coming out of that radio like pile drivers, something like--like, I was going to have to dodge them or something. I talked to an old boy one time, he'd been somewhere doing a carpenter job. And he said he heard 'Foggy Mountain Breakdown' coming out of the house next door, coming out the window. And just went crazy. He went over and banged on the door and said, 'I got to know what that is.'"

Hartford says that part of Earl Scruggs' magic is in his phrasing, part is in his touch and tone and part in the relative simplicity of his playing. Scruggs himself say he's always careful not to overplay, something he learned from his mother when he was practicing one day as a teenager.

"I was playing so much stuff. I knew what I was trying to do, but mother--my mamma--said, 'Earl, if you're going to play, play something that's got a tune to it,'" Scruggs says. "That hit me like if she'd have used a sledgehammer on me. And I thought, 'Well, if she can't tell what I'm playing'--and she's just put up my playing ever since I was crawling around trying to learn how to play--'I'm doing the wrong thing if she can't tell what I'm playing.' So I cut back on trying to play it so much."

Scruggs says that when he wrote "Foggy Mountain Breakdown" more than 50 years ago, he didn't set out to write a great piece of music. He says it just fell together as a tune that fit the banjo. But clearly, he created something that would inspire musicians and audiences for years to come. "Foggy Mountain Breakdown" has been recorded dozens of times. And any self-respecting bluegrass picker today knows this classic by heart.