Accessibility links
'Oklahoma!' Jeff Lunden tells the story of "Oklahoma!" The musical, which premiered in 1943, and was expected to flop. But it didn't.

Recordings Used: Oklahoma! – Original Cast – MCA ("Oh, What A Beautiful Morning," "Many A New Day," "Surrey With The Fringe On Top," "People Will Say We're In Love," "Pore Jud," "Oklahoma!" and "Kansas City." 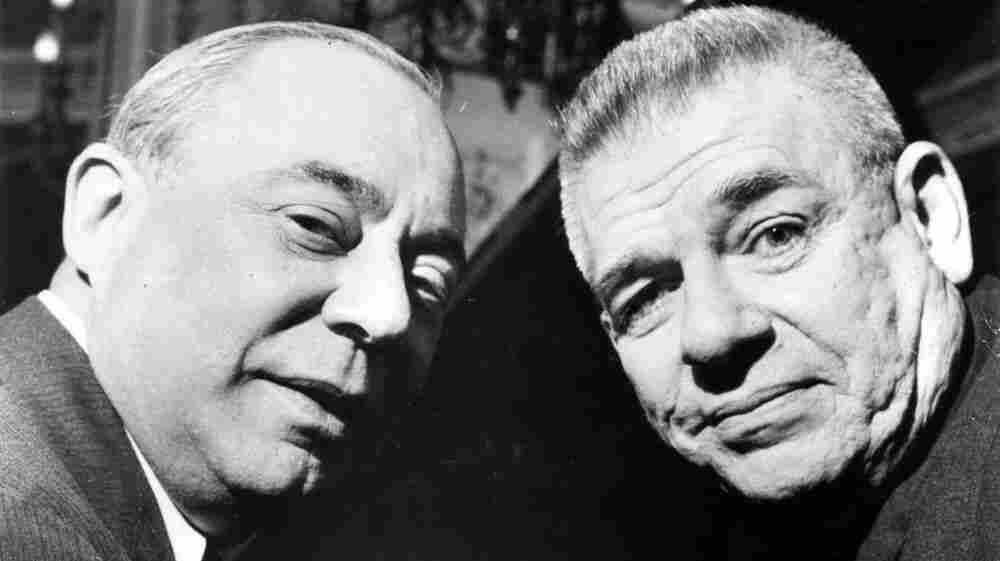 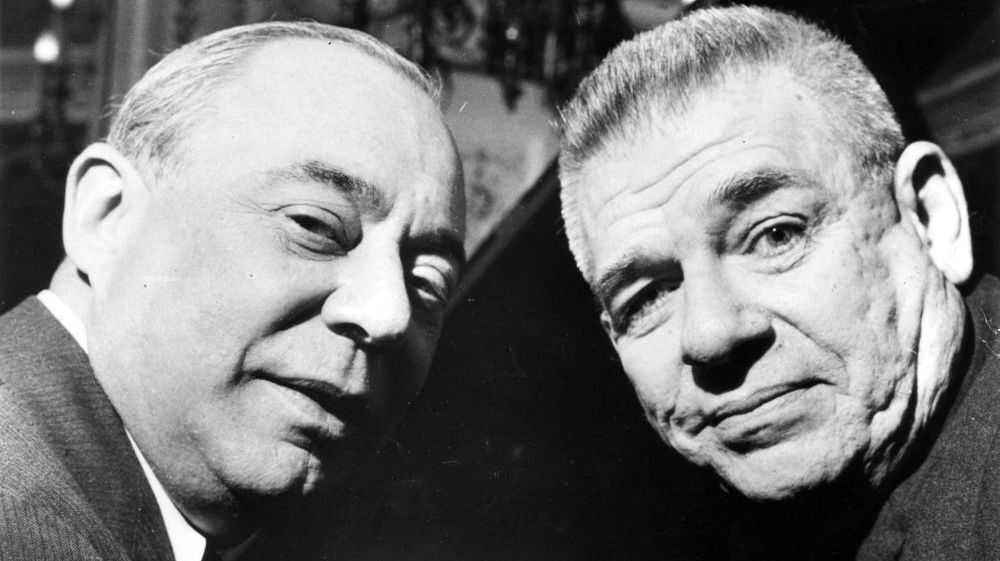 Richard Rodgers and Oscar Hammerstein in 1960.

"Oklahoma!," the musical, not the state, opened on March 31st of 1943, and most Broadway critics were certain it would fail. After all, composer Richard Rodgers was working for the first time without Lorenz Hart, his longtime writing partner. Oscar Hammerstein, the show's librettist, had authored nine consecutive flops. "Oklahoma!" was also based on a very little-known play by Lynn Riggs called "Green Grow the Lilacs," but "Oklahoma!" not only became a hit, it spawned what amounts to a revolution in American musical theater.

There once was a steadfast rule amongst writers of musicals. You had to start your show with a bang. Let the tired businessman know he was in for a fun, sexy night of frothy entertainment. Bring out the chorus, bring on the girls! That hardly sounds like the opening to "Oklahoma!"

" We open the show on a very rather quiet note,"the late Jay Blackton, who was "Oklahoma!'s" original conductor notes in a vintage recording. "Just this one cowboy comes out to sing to this elderly lady who's sitting in a rocking chair. And a lot of people were a little concerned that it was a rather slow, unexciting opening."

But that was exactly the point. Rodgers and Hammerstein wanted to start this American folk tale in a quiet, unassuming way, a way that was dictated by the story. And it worked. The late Agnes de Mille, who choreographed "Oklahoma!," never forgot the reaction of the opening-night audience.

"Oh, What a Beautiful Mornin'" produced a sigh from the entire house I don't think I've ever heard in a theater," The show's choreographer, the late Agnes de Mille, comments, "It was just `Ahh.' It was perfectly lovely and deeply felt."

Rodgers and Hammerstein had clearly struck a chord with the theater-going public. While they weren't necessarily out to revolutionize the American musical, they were interested in melding the elements of story, song and dance in a more integrated way. Before "Oklahoma!," most musicals had been haphazard affairs, where the songs related to the plot in only the sketchiest of ways. Composer-lyricist Stephen Sondheim, who studied with Oscar Hammerstein, explains.

"Oscar was interested in storytelling, which was not true of virtually anybody writing musicals throughout the '20s and '30s and into the '40s. The best musicals of that period are either satires, like "Of Thee I Sing," or just shows with great scores, like some of the Cole Porter things. And, in a sense, he spoiled it for the rest of us."

Before they joined forces on "Oklahoma!," both Oscar Hammerstein and Richard Rodgers had separately established reputations as giants of the musical stage. Hammerstein was born into a theatrical family and collaborated with several composers, including Sigmund Romberg, Vincent Youmans and Jerome Kern. It was with Kern that Hammerstein wrote the landmark musical "Showboat" in 1927.

Richard Rodgers, in contrast, had only worked with one partner in his entire professional career, Lorenz Hart. The two had written dozens of hit shows with hit songs since the '20s. But Larry Hart's alcoholism and personal demons were taking a toll on the partnership. Max Wilk, author of "Overture and Finale," a book about "Oklahoma!" and "The Sound of Music," says that Rodgers quietly sought out Hammerstein in 1941 and asked him if he'd be willing to collaborate.

"Oscar said, `I would never be a party to breaking up your team. But if it ever gets to a point where Larry is absolutely unable to work with you anymore, then call me.' So that is exactly what happened, a year later."

Richard Rodgers and Oscar Hammerstein began working on their adaptation of "Green Grow the Lilacs" in the summer of 1942. They spent countless hours discussing style, tone and song placement before they even began writing. With Larry Hart, Rodgers had always written the music first. But the process was reversed with Hammerstein. Oscar's son William says that his father and Dick Rodgers worked at different speeds.

"Dad would work for weeks on a lyric and he'd call Dick up and recite the lyric, and five minutes later, practically, Dick would have a melody."

This new way of writing had a profound impact on Rodgers, as Stephen Sondheim related in a telephone interview.

"Rodgers responded, I think, to Hammerstein's style immediately, and that's why his music is so distinctly different than it was with Lorenz Hart, who had a much more urban and jaded sensibility."

Hammerstein was more sentimental. One of his favorite songs in "Oklahoma!" was "Surrey With the Fringe on Top."

"I don't cry at sadness in the theater. I cry at naive happiness," Hammerstein says in a vintage recording. "The fact that two people are looking forward with great anticipation to a ride in a surrey to a dance makes me cry."

The plot for "Oklahoma!" hinges on the question of whether Laurey, a fresh-faced farm girl, is going to attend a picnic with a charming cowboy named Curley or a sullen farm hand named Jud. Rodgers and Hammerstein completed the script and score in a matter of months, but they had trouble coming up with the show's big ballad. Oscar Hammerstein explained the writing process to Ed Sullivan years later.

"We were faced with the problem of having two young lovers who were fighting all the time, and a song of bickering wouldn't be very much fun. And these were shy young people, and we had to write in their words, not ours. If they hadn't admitted to themselves that they were in love, how could they approach each other? So we thought of this oblique way of saying, `Don't be nice to me. Don't laugh at my jokes. Don't throw bouquets; otherwise, people will say we're in love.'"

With most of the writing in place, a creative team for the show was assembled: director Reuben Mamulian(ph) and choreographer Agnes de Mille, who had recently created the western ballet "Rodeo" with Aaron Copland. One of de Mille's assignments was to create a dream ballet at the end of the first act. Oscar Hammerstein had written a circus scenario for it, but de Mille told Hammerstein she thought there was something missing.

"I said, `There's no sex in the first act.' He says, `There isn't?' And I said, `Let's do a ballet about what they've been talking about.' Laurey's scared to death. She's in love with Curley. She wants Curley. Curley wants her. But she's scared to death that Jud will kill him."

Jud, the villain in the piece, lives alone in the farm's smokehouse and has a collection of pornographic French postcards.

"She's been down in the smokehouse and she's seen the postcards, and I said, `Don't think she isn't interested in them," Ms. De Mille continues. "They have a lurid appeal for her.' And Oscar said, `Why, no! She's horrified!' I said, `Mr. Hammerstein, did you ever meet young girls? You have daughters, haven't you?' He said, `Yes, several.' I said, `Well, you don't know them. They're fascinated, believe me.'"

De Mille's dream ballet with its psychological underpinnings was to become one of the centerpieces of "Oklahoma!" Rehearsals began in February 1943 with a cast of little-known actors; among them, Alfred Drake as Curley and Joan Roberts as Laurey. After a month of rehearsals, the first public performance took place in New Haven, Connecticut. But it wasn't called "Oklahoma!" then; it was called "Away We Go," from the square-dancing cry, `Do-si-do and away we go.' New Haven was supposed to be a safe haven, a place to develop the show without the prying eyes of the New York press. But according to author Max Wilk:

"The famous story is that Winchell sent his secretary up to see it. She came up to New Haven. She saw it; sent a telegram in the intermission that said, `No girls, no legs, no chance.' "

Actually, the audience and critical response in New Haven wasn't bad at all, but it was clear that "Away We Go" needed work. As the company moved to Boston, Hammerstein pruned his script. One song was cut, and another song, a nice little number in the second act called "Oklahoma!" was reworked to add the entire company. And all of a sudden, what had been a nice little show became a smash hit.

Joan Roberts, who played Laurey in the original production, remembers the pandemonium that greeted the revised song.

"The applause was so deafening, and it continued and continued, and we just repeated two encores and we stood there until they stopped applauding. And I didn't think they ever would. And that's when they named it "Oklahoma!"

The newly titled show moved to New York, and on March 31st, 1943, it opened. Despite some empty seats, the reception was ecstatic, according to Max Wilk.

"Something happened to the audience. From day one, they hit a nerve."

It would be years before "Oklahoma!" played to another empty seat. The show's sunny optimism and homespun Americana were a perfect tonic for the jittery uncertainty of World War II. Soldiers and sailors waiting to be shipped to the European theater were given free passes to see "Oklahoma!" Agnes de Mille.

"There was a triple row of uniforms at the back of the theater, every matinee and every evening performance," Agnes de Mille says. "They loved the show. It was home time to them and home folks. They stood there with the tears pouring down their cheeks."

The original production was a phenomenon. It ran on Broadway for more than 2,000 performances, longer than any previous musical, and it marked the beginning of the extraordinary collaboration of Rodgers and Hammerstein, who went on to write "Carousel," "South Pacific," "The King and I" and "The Sound of Music." They ushered in an entirely new kind of musical theater, one where the storytelling became paramount and paved the way for writers like Lerner and Loewe and Stephen Sondheim. The Rodgers and Hammerstein office licenses 700 productions of "Oklahoma!" a year. There is literally never a night when the curtain doesn't rise on a cowboy singing "Oh, What a Beautiful Mornin'," somewhere on this planet.