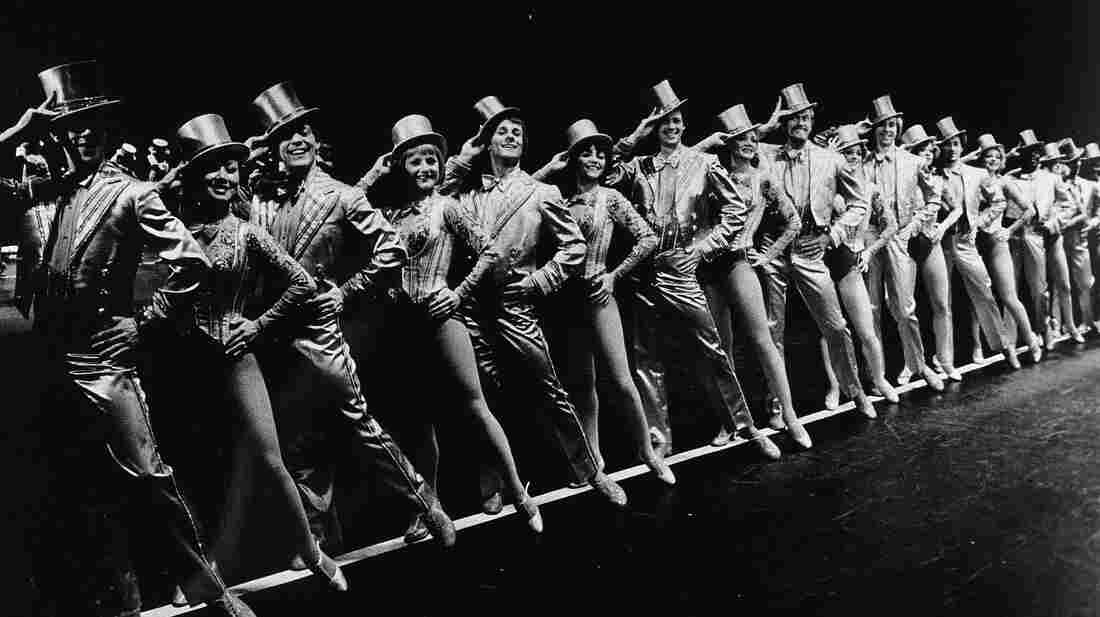 Actors onstage in A Chorus Line, around 1980. Museum of the City of New York/Getty Images hide caption

toggle caption
Museum of the City of New York/Getty Images 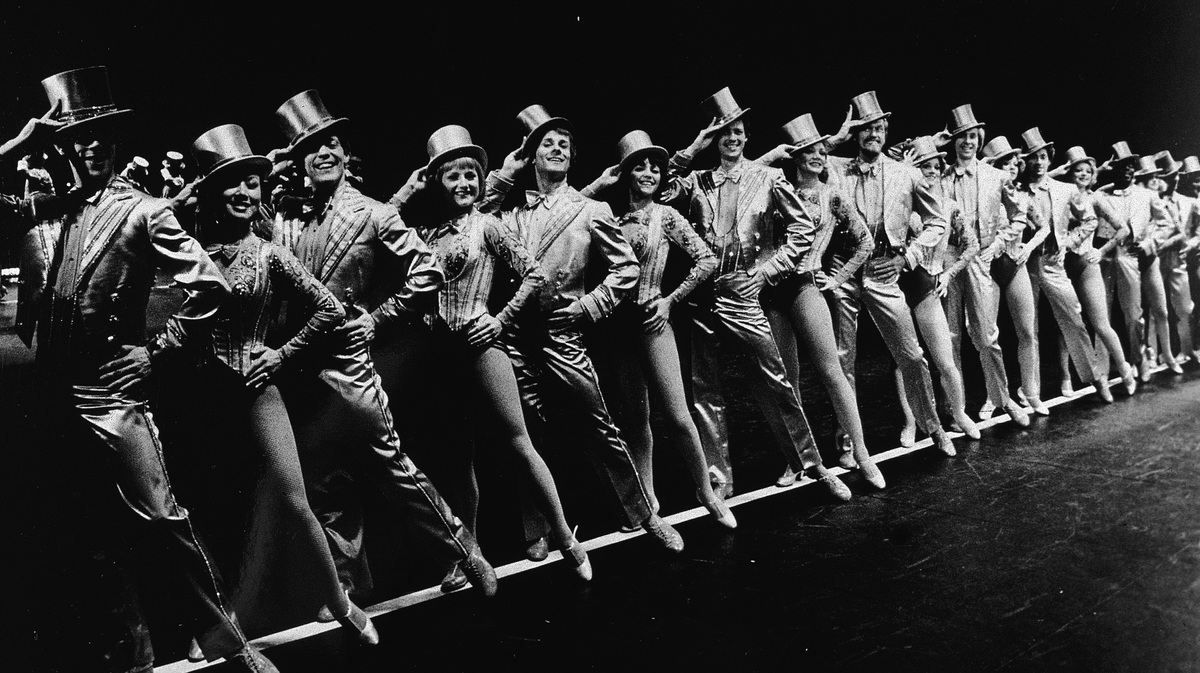 Actors onstage in A Chorus Line, around 1980.

Museum of the City of New York/Getty Images

A Chorus Line changed the course of musical theater. Rejecting traditional sets, costumes and big stars, the show introduced gritty psychological realism to musicals. And all two hours and 10 minutes of its almost non-stop music has enjoyed a life even beyond the show. Marvin Hamlisch composed the backstage musical about dancers auditioning for a chorus line, and Edward Kleban wrote the lyrics.

"One" is the term for that number a chorus performs behind the star to make her or him look good. But in this show, "One" also stands for the united facelessness of all those gypsy hoofers desperate to dance. In 1983, when Chorus Line became the longest running musical in Broadway history — that record was broken in 1997 by Cats -- Kleban talked to me about his show and "One," its singularly sensational song.

I asked him if the lyrics he wrote for "One" were his favorite in the show. "Not at all," he said. "They were the hardest, in a way — the lyrics to 'One,' because they had to sort of say nothing and everything at the same time."

He didn't like the other hit song in the musical, "What I Did for Love," either. "I like that the least, actually," he said. He objected to it precisely because it was written to be a hit. It didn't do what he thought theater songs should do: further the plot, reveal character. In fact, Kleban disliked that song so much that he put a note about it in his last will and testament, read at his 1988 memorial service by Linda Kline, his longtime companion:

"Anyone who wants to play an instrument, or to sing any songs or music — with the exception of the composition 'What I Did for Love,' which I do not wish to be performed at my funeral — should also be allowed."

Kleban was a notorious perfectionist, a stickler, impossible sometimes. He was one of my dearest friends, since high school. Witty, creative and idiosyncratic, he took naps every afternoon from noon to three and simply could not deal with the Lincoln Tunnel. He collected dictionaries and began subscribing to the New Yorker magazine when he was 16, and it was still definitive. After A Chorus Line made him a millionaire, Kleban wore custom-made shirts with stripes.

In the last months of 1987, as he was dying of cancer of the mouth, the 48-year-old found solace in Beethoven's stringed quartets — and no solace in most of his own songs. Despite the Pulitzer Prize, the Tonys, the New York Drama Critics Circle Awards, Kleban liked only about 65% of A Chorus Line. But there was one song he loved: "At The Ballet."

"I just think it's a very honest, very compelling tale of, you know, unhappy home life and into the artistic process as a salvation for those people," he said. "I love the whole song. I usually cry. It's the rare performance of 'At The Ballet' that doesn't make me cry all over again. I don't know why. I just — I cried when I wrote it. I can't tell you why."

Nearly seven million people saw A Chorus Line in its 15 years on Broadway. They came for a show full of dancing and drama, conceived, choreographed and directed by the brilliant Michael Bennett — "A show about hope," Bennett said.

When A Chorus Line opened in 1975, the era of the big musicals, like Hello Dolly, Fiddler on the Roof and My Fair Lady, was in decline. Steven Sondheim was writing cool, cerebral shows. With its earnest, striving, caring, dancing job-hunters, A Chorus Line put the heart back into Broadway musicals.

The show is about who gets picked for a chorus, and who doesn't, how they got there from childhood miseries, cruel parents, dull hometowns. One of the dancers, Cassie, is back in New York after trying to make it in Hollywood. The director of the show she's auditioning for was once her lover. In an early version, Cassie did not get the job.

"It certainly can be argued that in real life someone's ex-lover who is being troublesome the entire evening is not someone that you would cast," he says. "We very carefully considered who would get the job. It's not arbitrary at all. The tall people get the job. Good-looking people get the job. People who haven't been personality problems all evening get the job, if you notice."

But Marsha Mason, then married to the playwright Neil Simon, saw the show in previews and got the director on the phone. "'You can't do that,'" she said, according to Kleban. "'You can't step on all the hopes and dreams of the entire audience and send Cassie home. You have to leave the door open a little — you know, give them some hope. It's just too brutal.'" So they changed the ending.

A Chorus Line was composer Marvin Hamlisch's first Broadway show. He'd won Oscars for The Way We Were and The Sting, but like Kleban, Hamlisch was new to theater. At Kleban's memorial service, Hamlisch, the last surviving member of A Chorus Line's creative team, spoke of his word-making partner:

"We've lost the real mainstay of the show. I always felt that Ed was probably one of the great unsung heroes, and I'll tell you why. Ed never liked publicity. So when the show was a smash and I would be called to go here or called there to do a radio show, I'd say to Ed, 'Come on. Let's go. Let's go.' 'No, no, no. You go.' And yet what he was able to do was to be the voice. That beautiful fusion between book and lyrics, which is what great theater lyricists are all about, was something that Ed cared so deeply about."

Kleban never talked about show tunes. He said he wrote theater songs; every song, like a three-act play, with a beginning, middle and end. He learned his craft and polished it at the BMI Musical Theatre Workshop, where composers and lyricists try out new material.

Before A Chorus Line and toward the very end of his life, Kleban produced words and music for some extraordinary theater songs, but he never had another Broadway show. Stage and screenwriter Peter Stone says at the age of 36, Kleban basically stopped writing.

"The reason he gave [was] that he had retired," says Stone. "He used the word to me several times: 'I've retired,' he'd say. It was at that point that I finally realized something very important about Ed: that all his life he had been totally unprepared for success. But life being cruel, he was going to have to live with it anyway."

A month after A Chorus Line blazed onto Broadway, Kleban went to his 20th high-school reunion. Members of the High School of Music and Art Class of 1955 were asked to write down their current addresses and occupations. Ed, signing in, wrote, "Last year, I earned $500 as a songwriter. Two months ago, under occupation, I would have written failure."

Anyone who ever loved musical theater, anyone who ever went after something wholeheartedly and got it — or, maybe more important, didn't — anyone who ever dreamed found themselves in A Chorus Line. And Edward Lawrence Kleban, its least-known creator, gave audiences and performers the words to frame their experience.