Accessibility links
'My Girl' Smokey Robinson wrote "My Girl," recorded in 1964 by The Temptations, for Temptation David Ruffin to sing, knowing he'd be launching a new star.

As performed by The Temptations

Recordings Used: My Girl, The Temptations 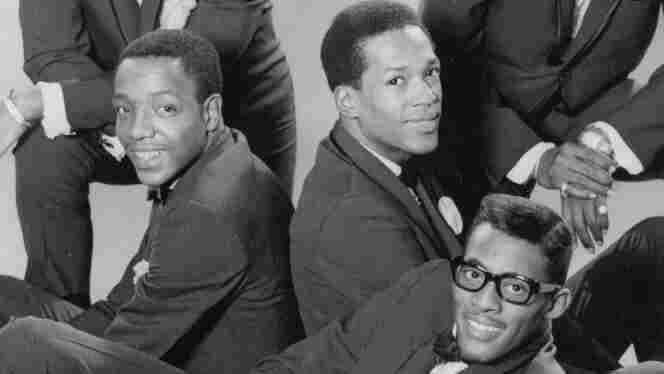 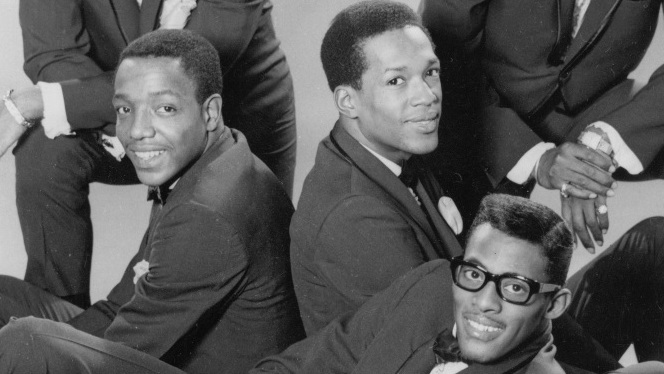 Paul Williams, Eddie Kendricks, and David Ruffin of the Temptations, in 1965.

When you hear the familiar beat of Motown music, what do you see? The Supremes in their sequined gowns, Marvin Gaye, Stevie Wonder? Or do you remember a song you couldn't wait for the radio deejay to play? Maybe "Ain't Too Proud to Beg" or "Just My Imagination." It's hard to pick a favorite Motown tune because there are so many of them.

Motown founder Berry Gordy believed in certain standards for songwriting. He thought lyrics should be simple, clear communication, and he had a strong preference for love songs. So when Smokey Robinson wrote and produced "My Girl" for The Temptations, he scored it big with the boss.

"Berry called me to his office because we had a thing in those days whereas if you got a number one record, then you got a thousand-dollar bonus as the producer of that record. So he called me into his office and he said, `Hey, man, I want to give you your producer's bonus check.' So I said, `Wow.' I said, `For what?' you know? He said, `You got a smash hit.' I said, `What is it?' He said, "My Girl" on The Temptations. He said, `It's not number one yet, but it's most definitely going there.'"

"My Girl" was just one of the big-selling products that came out of the
Motown factory. Gordy acknowledges that the foundation of Motown was built on the same principles he'd learned while making cars on the Lincoln Mercury
assembly line in Detroit. He even called the house that served as Motown's
first office, Hitsville USA, an unsubtle reminder to writers, producers and
artists that nothing less was acceptable.

On Friday mornings, Gordy would assemble his team for a listening session to decide which songs were worthy of release. In 1994, he told NPR that sometimes, to measure a song's potential, he would ask them one question.

"Well, if you had one dollar and you were hungry, would you buy this record or would you buy a hot dog? And usually they would always pick the hot dog. But how long they took always told us how great the record was."

Smokey Robinson's record for writing hit songs for Motown was nearly impeccable. Among them, "You Beat Me to the Punch" and "My Guy" for Mary Wells. For his own group, The Miracles, he wrote, "Tears of a Clown," "I Second That Emotion," and "Shop Around," Motown's very first million seller.

Smokey Robinson credits Berry Gordy with tutoring him in the craft of songwriting.

And he always kept in mind who he was writing for when he tackled a song. In the case of The Temptations, Smokey Robinson was writing for five Southern men: tenor Eddie Kendricks and baritone Paul Williams from Birmingham, Alabama; tenor Otis Williams from Texarkana, Texas; bass Melvin Franklin from Montgomery, Alabama; and baritone David Ruffin from Whynot, Mississippi. On stage, they wore clean-cut stylish outfits and they danced smooth and polished steps as precise as their harmonies. In an interview with NPR in 1994, tenor Otis Williams said the late Paul Williams came up with the idea to choreograph their concerts.

"Him being such a showman himself, he said, `Now, fellas, we just can't stand there. We have to dance and move and sell sex 'cause the women like that.' And so that's how we started being noted for our choreography."

Eddie Kendricks sang lead on a number of the group's early hits. But Smokey Robinson sensed that if he wrote a song, the right song, for heartthrob David Ruffin, he'd be launching a new star.

"David Ruffin, I knew, was like this sleeping giant in this group because he had this--it's sort of like a mellow gruff-sounding voice. And all I needed was the right song for his voice and I felt like I would have a smash hit record. So I sat down at the piano to write a song for David Ruffin's voice. So I wanted to make it something that he could belt out, but yet make it melodic and sweet."

"Around the time that Robinson was writing 'My Girl,' the Motown artists were touring the country doing the Motor Town review. On any given night, audiences could see Mary Wells, The Temptations, Marvin Gaye, Stevie Wonder, The Supremes and the Miracles all on the same bill. While on the road, Robinson worked with The Temptations on 'My Girl.'"

"We were playing at the Apollo Theater, and every day in between the shows--at the Apollo Theater, you did four or five shows a day, and in between every show, I would take The Temptations down on the stage where there was a piano, and I would work on "My Girl" with them until they knew it like the back of their hands. And I always let The Temptations make up their own background vocals, because they were always so great at doing their own background vocals. They could all sing so good. So I was just showing David Ruffin how to sing "My Girl" or the melody and what I thought how he should interpret it, and they would be over standing on the side of the piano making up the background vocals."

Back in Detroit, in late 1964, "My Girl" was recorded. Within a month of its release, it shot to number one on both the Pop and R&B charts. There was a rule at Motown: If a songwriter scored a hit for a group, he or she automatically got to write the group's follow-up number. So in 1966, when Robinson's "Get Ready" fell short, songwriter Norman Whitfield stepped in with the first of many hits for the group.

For the next six years, The Temptations continued to record chart climbers, but now the songs, mostly by Whitfield and Barrett Strong, were more political, reflecting the racial tensions of the late 1960s and early '70s. And there were changes beginning in 1968 with the departure of the charismatic David Ruffin. Over the years, many members of the group have come and gone, but the name The Temptations remains and still today draws a crowd. In 1994, Otis Williams, the group's last surviving original member, was asked if one song spans out among The Temptations' 40 years of infectious harmonies.

"I automatically would have to say "My Girl." "My Girl" is so universal that we could not--we tried years ago not to do "My Girl" in the show. We would never do that again. We got cussed out, almost ran off the stage, so it has such a universal appeal."

Universal appeal that is so great, Smokey Robinson still uses "My Girl" in his own performances as the final song in a medley of hits he wrote for The Temptations.