Title: Hellhound On My Trail

Recordings Used: "Hellhound on My Trail" by Robert Johnson

"Ramblin' on My Mind" by Robert Jr.Lockwood

"Devil Got My Woman" by Skip James 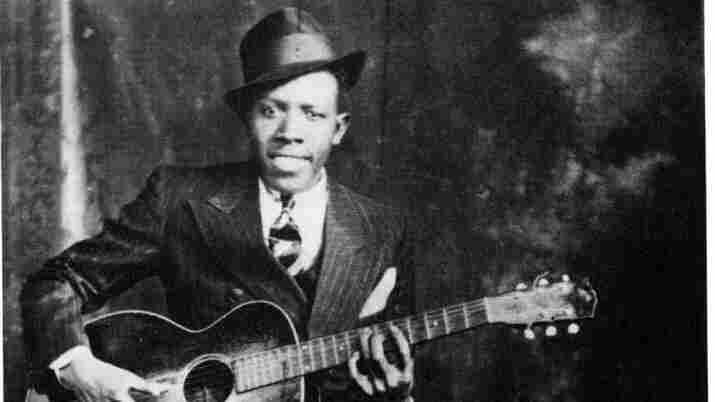 One of two existing photographs of Robert Johnson. Courtesy of the artist. hide caption 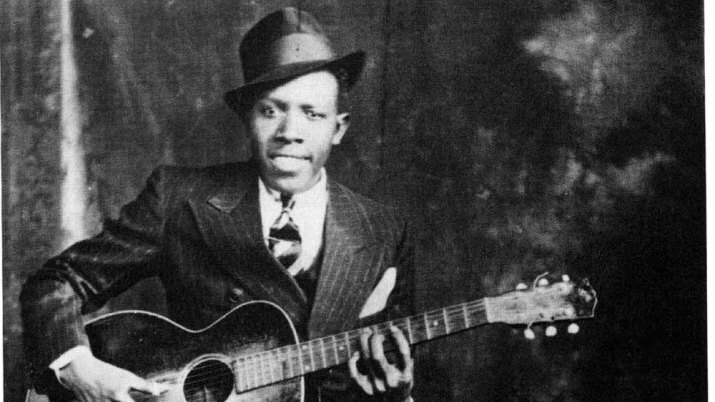 One of two existing photographs of Robert Johnson.

If there is a mythic figure in the blues, it's Mississippi Delta musician Robert Johnson. Johnson only recorded 29 songs in the late 1930s, and he died at the age of 27. But his uncanny styling of traditional tunes and innovative guitar work influenced not only his fellow blues men, but a generation of rock musicians, too. And if there is one song that captures the mystery of this legendary figure, it is "Hellhound On My Trail," a haunting tale of a man pursued by the devil

Actually, my story doesn't begin with Robert Johnson, but with Louie J. Suggle, my across-the-hall dorm mate my freshman year at college. Louie J. was an aspiring deejay from Philadelphia who had a late, late night show on the campus station. It was Louie who first exposed me to the recreational stimulants common at the time, first unveiled a Hohner Blues Harp, a harmonica in its little blue plastic case, and first instructed me in the blues. Lesson number one was Robert Johnson.

I came to realize that Jim Morrison and John Lennon both borrowed from the music and that The Rolling Stones' "Love in Vain" and Cream's "Crossroads" really belonged to Robert Johnson.

"Love in Vain" by The Rolling Stones

"I think I had some vague notion of blues music in the early '70s, but really I was just your regular rock 'n' roll listening 18-year-old: Jimi Hendrix, The Beatles, The Stones, The Doors. But early in the semester, Louie J. called me into his room and told me he had an LP for me to listen to. He put Robert Johnson on the turntable and told the story of the blues men. From then on, everything changed. Today, Robert Johnson's bio is well known to many music lovers, but 30 years ago, it was a revelation. Young musician goes down to the country crossroads at midnight and sells his soul to the devil to learn how to play the guitar like no one else. He records just a handful of songs, and then, August 8th, 1938, just as his fame is starting to spread and he's about to be invited to perform at Carnegie Hall, he's murdered. Was it black magic or was he poisoned in a roadhouse by the jealous husband of one of his many girlfriends? People said he was crawling on all fours and barking like a dog at the time, and you can hear that torment coming in "Hellhound On My Trail," recorded June 20th, 1937, at a warehouse in Dallas, Texas."

As author Peter Guralnick puts it, when the song concluded, one might have expected the singer to be enveloped in a swirling mist. "Hellhound" was scratchy and high-pitched and bleak, and I was mesmerized by it. My middle-class Jewish roots didn't extend from Hackensack all the way to the Mississippi Delta, but somehow I connected absolutely.

And then there was the album cover. Columbia Records had issued one volume of Johnson's music in 1961 and another in 1970. One of the albums featured a rendering of his first recording session, which took place in a makeshift studio in a hotel room in San Antonio, Texas, late November 1936. It was a drawing of a young man sitting in a chair playing guitar, as two men with recording equipment watched him through a glass door. His back was to his audience. Some people said the guitar player did this because he was painfully shy. Others claimed he wanted to shield his unique fingering techniques from inquiring eyes. There were no known photographs of Johnson, and this only enhanced the intrigue for me. No one knew what he looked like, except for a handful of musicians still alive who used to wander the South with him, men like Johnny Shines and Johnson's stepson, Robert Junior Lockwood.

The door to the blues had been opened for me by dorm mate Louie J., and it led everywhere. I came to realize that Jim Morrison and John Lennon both borrowed from the music and that The Rolling Stones' "Love in Vain" and Cream's "Crossroads" really belonged to Robert Johnson.

Around this time, too, through Louie J.'s inspiration, I purchased my first harmonica, a blues harp in the key of C. For the next year or two, I drove friends and family out the door as I blew in and out, struggled to bend notes and play along with records. I searched for the right key to jam with "Big" Walter Horton, Sonny Boy Williamson I and Sonny Boy Williamson II, Paul Butterfield, Sonny Terry, Junior Wells, James Cotton, Charlie Musselwhite, and the greatest harmonica player of them all, Little Walter.

Over time, my playing became reasonable, and I started performing myself in the kind of bars where they throw things at you if they don't like your music. I sat in with the Arthur Cable Blues Band, the Pioneer Valley Hokum Boys, and Jay Walker and the Pedestrians. I was one of the Pedestrians. There was no Jay Walker. Once, I got to play at a concert at a fishing village in northeastern Brazil. The day before the show, the promoter drove around town with a loudspeaker mounted on the roof of his car, admonishing locals to come to the performance and hear the American play the harmonica. The fishermen remained unimpressed. Last year, I found a more appreciative audience, a group of kids in a bombed-out parking lot in Pristina, Kosovo.

Back at home, I hunted down the blues wherever I could, whether it was watching electric slide master Hound Dog Taylor, who had six fingers on his fretting hand, or catching an aging Howlin' Wolf before he passed away. Once, I bumped into Robert Junior Lockwood in a bar before a performance, and we got to talking.

Eventually, Robert Junior invited me up to his hotel room, where we continued our discussion. Here I was with the actual stepson of Robert Johnson, a man who had rambled the Delta with the mythical musician. At one point, Robert Jr. pulled out his guitar and began to play. `A-ha,' I thought. `Finally, I'm going to get to jam with a real live blues man.' And so I reached for my handy little blues harp, which, of course, I had in my pocket. When Robert Junior saw it, he stopped cold, looked at the white kid from New Jersey and said, `I've played with too many damn harmonicas.' My tail was planted firmly between my legs, but my enthusiasm for the blues remained undiminished. Girlfriends were still quizzed about the vocals on "Little Red Rooster" and guests still strained to find something familiar when they looked at my record collection. But all that stared back at them from the shelf was Blind Willie McTell, Blind Boy Fuller and Blind Blake, Piano Red, Speckled Red and Tampa Red, Memphis Minnie, Ma Rainey and Big Mama Thornton, Mississippi Fred McDowell, Mississippi John Hurt and Sippie Wallace, Guitar Slim, Magic Sam and Skip James, whose 1931 recording "Devil Got My Woman" almost surely influenced Robert Johnson's "Hellhound" six years later.

Sometime in the 1980s, miraculously, two photos of Robert Johnson appeared. One was a studio shot of a slim, good looking young black man with the most delicate long fingers wrapped around the fret board of his acoustic guitar. He wore a smart double-breasted pinstriped suit, a fedora with a jaunty tilt and an appealing smile. He seemed unbothered by hellhounds, like the happy-go-lucky traveler in "Sweet Home Chicago."

While it was exciting to finally see what Robert Johnson looked like, I was also a little disheartened to have some of the mystery solved. And soon after the photos came the marketing of the musician. I used to be part of a select club of blues nuts who were his admirers, the true believers who kept the flame burning. But today there are Robert Johnson posters and T-shirts and even a postage stamp. The mainstreaming of Johnson was good for the music but hard on my smugness. But even with the commercialization, my attachment to Robert Johnson and the blues remains intact.

A couple of years ago, a friend and I took a blues pilgrimage down Highway 61 in Mississippi. South of Greenwood, not far from the juke joint where Johnson met his end, we stopped at a little graveyard at the Mt. Zion Missionary Baptist Church. There, we found a memorial to the musician, a handsome granite marker adorned with a preserved photo of Johnson. But in this picture, there was no smile. He was in his shirt-sleeves, staring straight ahead, cigarette dangling, looking somber, like someone listening for the distant howling of hellhounds. Beneath the photo, these words were etched, `Robert Johnson, king of the Delta blues singers. His music struck a chord that continues to resonate. His blues addressed generations he would never know and made poetry of his visions and fears.'