Accessibility links
The Story Of The Beach Boys' 'Good Vibrations' The Beach Boys classic, released in 1966, is the product of a revolutionary approach to songwriting.

Listen
The Story Of The Beach Boys' 'Good Vibrations' 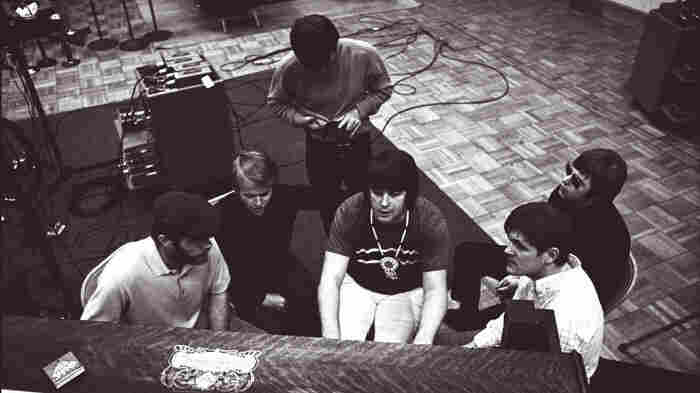 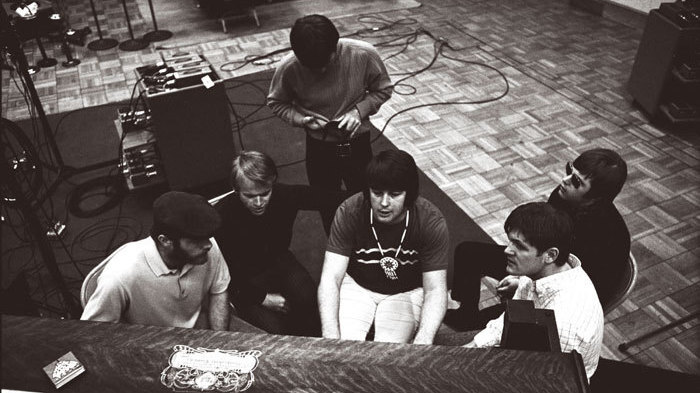 It's hard to think of American pop music in the 1960s without thinking of The Beach Boys.

In 1966, as rock 'n' roll was changing, Beach Boy Brian Wilson wrote a song that would break the rules of AM pop radio.

From the beginning, it was Wilson's infatuation with vocal groups like The Four Freshmen that helped define The Beach Boys' sound. They weren't the best musicians, but, boy, could they sing. As The Beach Boys turned out more hits, the band would tour, but Wilson didn't much care for playing live. He wanted to stay home, writing songs and producing records.

Phil Spector was his idol, and Wilson began hanging around Goldstar Studios, watching and studying his sessions. Spector knew how to orchestrate, arrange and produce great songs with incredibly big sounds. Wilson took those ideas and made them his own. He also took many of Spector's hit-making musicians.

At the same time, Wilson's music was becoming more introspective: less infatuated with cars and chicks than with soul and true love. He'd heard The Beatles' Rubber Soul. He felt challenged to make a great album, so he began to work on his masterpiece, Pet Sounds. One idea for a song was "Good Vibrations."

Wilson hired Tony Asher to write the words for his Pet Sounds project, and he took a crack at "Good Vibrations."

"He wanted to call the song 'Good Vibes,'" Asher says. "And I remember when he began to play this little riff, which he said he had been working on. He was saying something like, you know, 'Good, good vibes, I get good vibes,' or something like that. And I kept saying to him, 'You know, it really ought to be vibrations.' And he said, 'Yeah, but that's not what people say.' "

Mike Love and Brian Wilson later changed Asher's lyrics, but his idea remains: It's a song about a guy picking up vibrations from a girl.

Excerpt from Tom Moon's 1,000 Recordings To Hear Before You Die about "Good Vibrations"

Wilson and Tony Asher wrote the album Pet Sounds together, and The Beach Boys recorded it in 1966. "Good Vibrations" didn't make it onto the album. Wilson thought it needed a lot more work.

"You would sit with a music stand, blank piece of paper, and you'd wait until Brian got around to giving you your notes, because he knew exactly what he wanted," harmonica player Tommy Morgan says. "He knew every note in his head."

Musician after musician would say the same thing again and again, with the same sense of wonder. He knew the bass lines he wanted. He knew the organ sound, what stops to pull on the organ. He would use the studio and get that idea from his head onto tape, and he'd do it by recording it in bits and pieces, getting different sounds from three different studios. It was a revolutionary idea for making records.

Mike Melvoin, the organ player on many of the "Good Vibrations" recording sessions, recalls, "We were doing two, three record dates a day, and the level of sophistication was, like, not really sophisticated at all. We're talking about pop records here. And all of a sudden, you walk in, and here's run-on songs. It's like this section followed by that section followed by this section, and each of them with a completely different character. And you're going, 'Whoa.'"

There were a lot of record dates; some say as many as 18. And, in the end, Brian Wilson had to piece together a song from a stack of tapes three and a half feet high.

'They Were Most Blown Out'

After months of working in isolation, Brian Wilson was ready to play his miniature symphony for his brothers Carl and Dennis, for his cousin Mike and his friend Al. Brian Wilson remembers the first time The Beach Boys heard it.

"They were very blown out. They were most blown out," he says. "They said, 'Goddamn, how can you possibly do this, Brian?' I said, 'Something got inside of me.' I said, 'I had to do something,' you know, 'I got it going.' They go, 'Well, it's fantastic.' And so they sang really good just to show me how much they liked it. They sang for me."