Accessibility links
'Fire And Rain' Taylor discusses the iconic song's inspiration, composition, and why he reaches for the radio dial when it comes on. 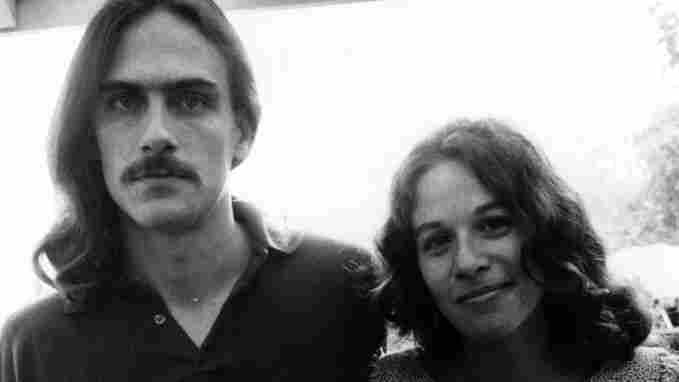 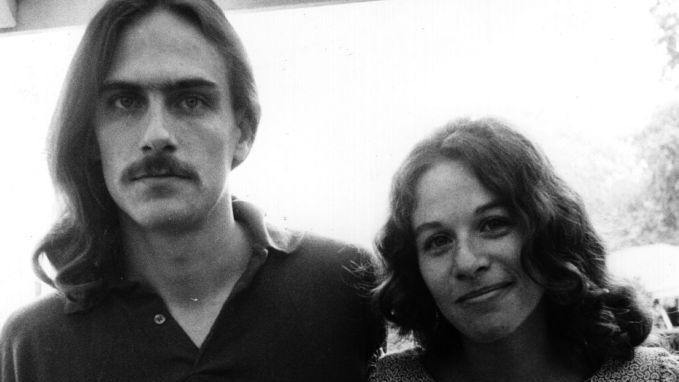 James Taylor and Carole King, who played piano on 'Fire And Rain'.

James Taylor now has a happy smile, and at 52, he is tall, thin and mostly relieved of hair. In the old pictures from the '70s, he has long black hair and a somber, gaunt expression. His voice hasn't changed. Even in the saddest songs, it's always had a kindly nature to it. He was born in New England and raised in North Carolina, and you can hear the influence of both regions.

As performed by James Taylor

Taylor wrote "Fire and Rain" in 1968. The song has three verses. One is about a friend who committed suicide, another is about Taylor's addiction to heroin, the third refers to a mental hospital and a band Taylor started called The Flying Machine. Each verse is followed by the same chorus, `I've seen fire and I've seen rain. I've seen sunny days that I thought would never end. I've seen lonely times when I could not find a friend, but I always thought that I'd see you again.' James Taylor told me he can't stand to hear his songs on the radio. He dives for the dial if "Fire and Rain" comes on. But it remains a song he likes to sing and one that audiences always wait for.

"I tried to figure out at one point how many times I'd sung it," Taylor says, "and I think it's probably approaching a thousand times now. I sung it yesterday at lunchtime for a benefit, and that may have been the thousandth time. For a while I thought it would be nice to build an odometer, like a big odometer that was visible on stage that had a large plate on the top of it that one struck with a mallet, you know, and--that every night we'd set it back to 999 and then turn it over to the ritual thousandth singing of 'Fire and Rain,' and then strike it with the mallet to drive it home."

After such a long run, it's understandable that "Fire and Rain" could flatten out emotionally for Taylor after all these years. But his fans' reactions to the song continue to surprise him.

"I'm surprised really at how durable it is or how reliable the connection--the emotional connection it makes is," Taylor explains. "But does it ever go flat for me? Yes. Yes, it has. And the way--if I'm distracted or overwhelmed, I can forget where I am. I mean, there's a song with three verses with the same form and three choruses following them. There's no bridge, there's no release, no break. So I can forget where I am. It's a terrifying thing, and it doesn't happen often, but it does, as they say, concentrate the mind."

"You want to feel as though you're making a connection with it. It helps to have an audience there receiving it, because then you want it to happen for them, too. It's, like, just a common--you know, making music for an audience is a communal process. And so, you know, they're resonating with it, I catch that, too. That's contagious."

Each of "Fire and Rain"'s verses deals with an adversity Taylor has dealt with in his life. The first is about a friend, Susanne, who he found had died,

"At the time, I was recording in England with The Beatles, and my friends had sort of kept the information about this death from me because they thought, you know, `This is a crucial time for him, he's doing his work, and we don't want to upset him or bring him down.' So my friend Richard Corey told me about it, but he had known about it for a month or so before he mentioned it to me. So that's where `they let me know you were gone' comes in."

The second verse is when you're still struggling to get off hard drugs,

"That was in New York, and that was when I came back to this country from London and was surprised that I'd picked up a habit. So I was physically very uncomfortable and having a rough time."

And the third verse in the mental hospital at Stockbridge.

"Up at Austin Riggs in Stockbridge. Yeah. It was--that is not a very--that's not so much a specific one, it's just sort of--I don't know what--kind of generally introspective kind of verse, I guess."

Taylor notes that if "Fire and Rain" were prose rather than poetry, it might be more open and explicated and described and have less of a connection with people. For Taylor, it's not about the actual information of the song, but the emotional connection with that information.

"You know, when someone understates something completely, you know, like a song like "What'll I Do?" you know, `What'll I do when you are far away and I am blue? What'll I do?' you know, when it's minimally stated, it just becomes pure emotional, you know? It's--it almost makes you laugh the way it makes you weep, you know, because it's so directly stated that it's almost like it punches a hole in you. It, like, lets it out of a place where it doesn't usually come out of, you know. Some haikus are like that. You read them and it's sort of like it's almost funny how direct people are being, you know? "

Surprisingly for a song with as deep as "Fire and Rain," the songwriting process was simple for Taylor, who says its creation was almost therapeutic.

"It does come very quickly," Taylor explains. "It did come very, very fast. But it was a great relief. That song relieved a lot of sort of tension. There was things that I needed to get rid of or at least get out of me or get in front of me or at least have some other relationship than feeling them internally, either by telling somebody else or by just putting them out in a form in front of me so that I could say, `There they are,' you know, externalizing it somehow. And that part was hard, having the feelings that needed to be expressed in that way. But it was actually a relief, like a laugh or a sigh.

But these days, the songs don't come as easily.

"They come less frequently and perhaps I don't have the same urgency to get them out. It's still a delight to write something and I still love it, but I think a couple of things have changed. One is that I'm older and that I'm not as emotionally intense. I've found other solutions--emotional solutions in my life. Another thing is that I'm more distracted. It's just very difficult for me. I think songs need to come out of--really out of a state of boredom almost as much as anything else. You need to have empty time in order to receive them. I'm much more distracted now and there's less time for them to come through. And I think the other thing is that there is a change between feeling the need to express something from the inside out and being aware of yourself in the marketplace and feeling as if the songs are somewhat being pulled out of you as something that's expected of you. So I've become more aware of it as something that I'm expected to do. And, you know, at the time that I wrote that song, I really didn't anticipate that anyone would hear it, you know? I mean, the motivation for writing it was quite pure. And that's not the case so much anymore."