Accessibility links
'Rock Around The Clock' In 1954, a square-looking country singer from the suburbs of Philadelphia named Bill Haley recorded the song that became a countdown to a new musical era.

performed by Bill Haley and his Comets

Recordings Used: "Rock Around the Clock", first as recorded by Sonny Dae and the Knights, then as rendered by Bill Haley and the Comets 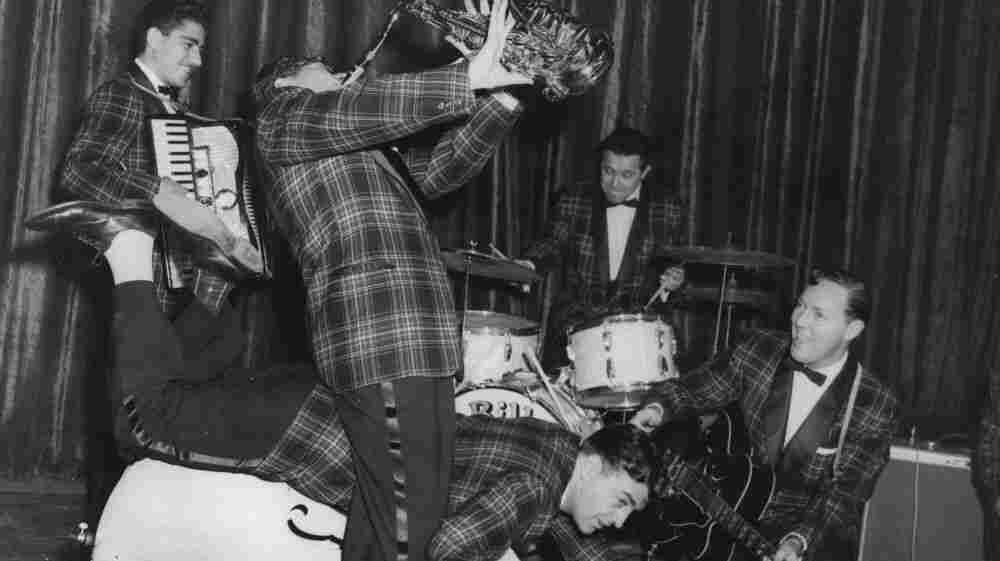 Bill Haley and the Comets rehearsing at the Dominion Theatre for their first British show. John Franks/Getty Images hide caption 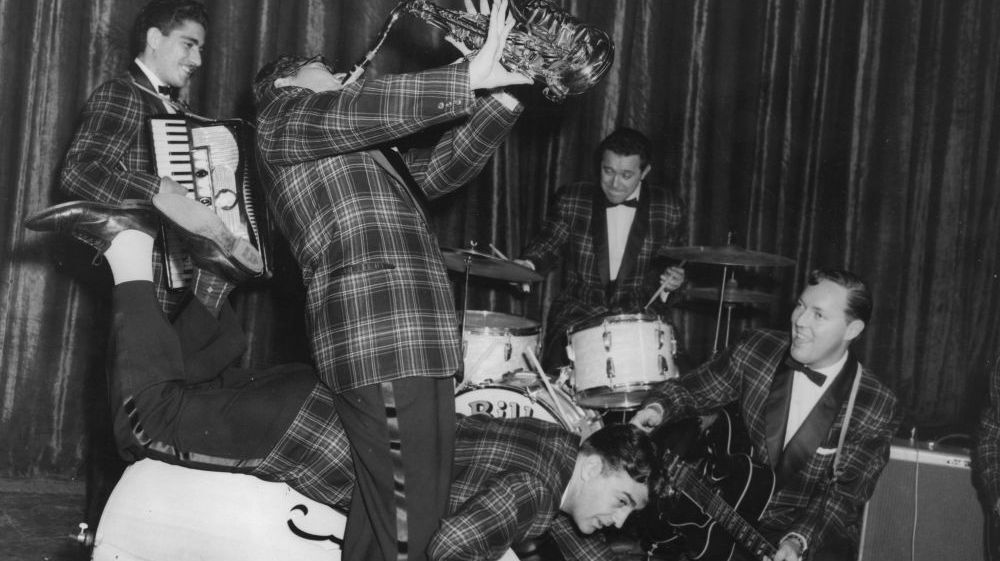 Bill Haley and the Comets rehearsing at the Dominion Theatre for their first British show.

For years, music critics have debated the origins of rock 'n' roll. Some can see it in the stage presence of Louis Jordan or hear it in the familiar guitar signature of Chuck Berry. Others point to the piano-pounding power of Little Richard or the hip swiveling of Elvis Presley. Next Thursday, July 6th, marks the 75th birthday of one of rock's most unlikely heroes, a square-looking country singer from the suburbs of Philadelphia named Bill Haley, heard here in an interview with Red Robinson.

"Well, the beginning for Bill Haley--let's really go back now--is 1947, 1946 to be exact," Haley himself told NPR. "And I had been trying very hard, as most young fellows do, to get started in show business, and doing amateur contests and what have you. And then in those days, Red, I was a yodeler, a Swiss yodeler. I always used to be known as Silver Yodeling Bill."

William John Clifton Haley never fit the image of a rock star. In old film clips from the 1950s, the chubby-cheeked singer dressed in a gray suit and tie sways with an acoustic guitar in his hands and a big spit curl bouncing on his forehead. And behind him, a bunch of guys dressed just like him wail on their instruments, including a big upright string bass and an accordion. Looks aside, Bill Haley & The Comets created what was arguably the first recognizable fusion of rhythm and blues with country and western swing that became rock 'n' roll. And guitarist Danny Cedrone played one of the earliest and most famous solos in rock history.

The true author of "Rock Around the Clock" is still being disputed. The record label lists two names, pop lyricist Max Freedman and Jimmy DeKnight, the pseudonym of music publisher and promoter James Myers.

"The melody was in my head for a long, long time. And I finally got it down on paper, playing the piano one finger at a time, and worked with the lyrics. But I wasn't satisfied with them. Anybody can put `one, two, three o'clock, rock,' but they couldn't put all of the lyrics. So Max walked into my office one day and he said, `That sounds good, Jim. Can I work with you on it?' And I says, `How would you know? You're tone deaf.' He says, `No, I hear it there,' and he says, `I'd like to work with you if you'll let me.' I says, `OK.' So the two of us, over a period of time--none of us was in a hurry--involved with 'Rock Around the Clock.'"

Comets keyboardist John Garande remembers it differently. He thinks that the relationship between Myers and Freedman was similar to many others in the music industry.

"Max Freedman wrote the song. Jimmy had the publishing company. And a lot of times a writer has songs and you'll have to give up a little bit if you want it published or you want it recorded. A&R men do the same thing. I mean, we have records out that has `written by Bill Haley and Milt Gabler.' Well, Milt Gabler never wrote songs, but he was the A&R man. So you have to give a little bit sometimes to get your songs recorded."

At the time, Bill Haley & The Comets were recording on the Essex label. Essex Records President Dave Miller refused to let them record "Rock Around the Clock" because of its association with Jim Myers. There was bad blood between the two men and Miller stood firm against the song. Eager to get it before the public, Haley formed his own record company and released the first version of "Rock Around the Clock," recorded by his friend, Ashal Vanidi, who went under the stage name of Sunny Dae.

The Sunny Dae record sank like a rock in the marketplace, leaving Bill Haley to puzzle over what went wrong. He and the Comets incorporated the song into their live act and started playing with the rhythm and the pacing until it finally became a crowd favorite.

In the meantime, Jim Myers got the group a recording contract with Decca Records, where they came under the wing of Milt Gabler, a successful artist and repertoire man who specialized in jazz and rhythm and blues groups. Gabler saw in Bill Haley & The Comets a band that could replace the jump blues stylings of Louis Jordan, who had just left Decca. Gabler struck a deal with Myers that he would record their version of "Rock Around the Clock" if The Comets would also record a Louis Jordan-style ditty called "Thirteen Women."

By all accounts, the recording session was a nightmare. For starters, on the way to the studio, the band took a ferry across the Delaware River and got stuck on a sandbar, making them two hours late. They arrived tired and hungry at Decca's primary recording studio in New York. Keyboard player John Garande adds that they were under severe time constraints.

"They were giving us three hours to do two sides. And when we got there, Milt Gabler, the A&R man, he wanted us to do "Thirteen Women." So, of course, that's what you do. It was a good song, but it took us about two and a half hours to get an arrangement and get it recorded. So then after that, we had 30 minutes left and he says, `Why don't you do that other song you guys were talking about, the '"Rock Around the Clock"'?"

Bass player Marshall Lytle says that presented a problem for their session guitarist, Danny Cedrone, a lead player who had sat in with The Comets on a number of their Essex recordings but was totally unfamiliar with "Rock Around the Clock."

In a rush to get the song recorded, the band drowned out Haley's vocals, so they tried it one more time with Haley singing against the basic rhythm track and that was it. They were into overtime and had to end the session. Then the engineers pulled off something of a miracle. They mixed the best parts of both versions and came up with a hybrid master tape.

"At that time, it was very difficult to splice," Mr. Garande says. "They had to time the song and make sure each one was the same amount of time. And them guys were so good, and they could do anything with it. And, of course, you were doing it on mono, so it was very difficult."

Milt Gabler's agenda was to promote "Thirteen Women," and so that's what went on the A side, relegating "Rock Around the Clock" to side B. After its spring 1954 release, the record sold about 75,000 copies, respectable but a hit. That wouldn't happen until a year later, when "Rock Around the Clock" became associated with the 1955 film "Blackboard Jungle."

Based on a best-selling novel, "Blackboard Jungle" is the story of juvenile delinquents in an urban high school. "Rock Around the Clock" was heard under the film's opening credits. Director Richard Brooks chose the song because he felt it captured the wild, loud energy of young people. Some critics even say that this marked the beginning of rock 'n' roll's long association with anti-social behavior. Within two months of the film's release, "Rock Around the Clock" sold more than a million copies.

Bill Haley died in 1981. The surviving members of The Comets still tour the world. Bass player Marshall Lytle claims that they are the oldest living rock 'n' roll band in existence, and he might be right.

Since its release more than 40 years ago, "Rock Around the Clock" has sold over 25 million copies in over 30 languages. And it seems like this song about the perpetual clock will keep on ticking.