Accessibility links
Erroll Garner: 'Concert by the Sea' Erroll Garner became a jazz star even though he never learned to read music. He taught himself to play the piano and landed a gig on the radio at age 10. As an adult, Garner recorded the live album, Concert by the Sea, on one melodic night in a church in Carmel, California. 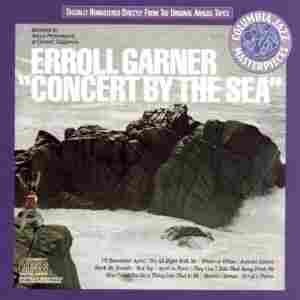 A.B. SPELLMAN, National Endowment for the Arts: Here we have Concert by the Sea, a very popular record by Erroll Garner. Now Garner, Murray, is a musician who had never studied at all, in fact he never learned to read music, and yet he gets a lot of complex stuff going in his work.

MURRAY HORWITZ, American Film Institute: He really does, he's got that ground rhythm that you heard — that whoomp-whoomp-whoomp-whoomp kind of rump-rolling thing in the left hand — and then these... this right hand that lags just a little bit behind it and always keeps you off guard and makes him swing very, very hard, yeah.

SPELLMAN: Garner is also a musician who likes to go for "pretty," and I mean very pretty.

HORWITZ: Yeah, there are some beautiful ballads and one of the stunning things about this record, Concert by the Sea, is that it all took place in one night. It's one recital by one pianist, backed up by a bassist and a drummer — Eddi--Calhoun and Denzel Best — and — puts an extraordinary array of tempos and grooves into his playing. So there are all those really hard-swinging, fast, virtuosic pieces where he shows off his velocity. But he's also virtuosic with ballads, like "Autumn Leaves."

SPELLMAN: On the fast tunes, he's able to keep a real sort of motor going. At the same time he's playing mostly chords without playing a lot of long lines, which is unusual for a pianist.

HORWITZ: It is unusual, especially at that time. He came along at a time when most pianists were trying to imitate the sound of Charlie Parker's saxophone. And so, as you say, there were these lines that they were all trying to play — especially in the right hand. He was very much out of the tradition of the two-fisted pianists like Fats Waller, so he's very pianistic. He uses the whole instrument, and as the jazz musicians say, "he plays a whole lot of piano." He never just stops his left hand, does a little bit with the right, and then chords a little bit with the left. He's always playing all the time.

SPELLMAN: And he was a very influential pianist as well. In people like George Shearing — and even a good deal of Peterson — you can hear.

HORWITZ: Absolutely, and the way he was influential, I think, was with his ideas and his conception more than anything else. For example, I mentioned Fats Waller. He's like Fats Waller not in that he sounds anything like him particularly, but in that he's always has something going. There's always a joke or a rhyme or a little something that rewards your listening. In every measure, he tells you to pay attention, and you want to pay attention because there's so much joy and wit in this music.

I want to say one thing, A.B. Erroll Garner was really still part of that generation of musicians that considered themselves entertainers. And so he very much was about reaching out to the audience, inviting them in, saying come on, let's have a good time together, you're going to be moved, you're going to be amused, you're going to be compelled. And that happens all throughout this extraordinary concert. The technical quality of the recording is not as great as if it had been made in a studio, or it had been made in Carnegie Hall or some place like that. It was made in a church, by the sea, in Carmel, California, but it rewards listening over and over again.

SPELLMAN: The recording is Erroll Garner, Concert by the Sea. It's on Columbia Jazz Masterpieces. For NPR Jazz, I'm A.B. Spellman.