Accessibility links
'In the Mood' The 1939 recording by Glenn Miller and his orchestra remains a classic, and one of the most influential songs of the 20th century.

Title: IN THE MOOD

"Hot and Anxious" by Fletcher Henderson

"There's Rhythm in Harlem" by the Mills Blue Rhythm Band

"In The Mood" by the Edgar Hayes Band

"In The Moody" by Artie Shaw 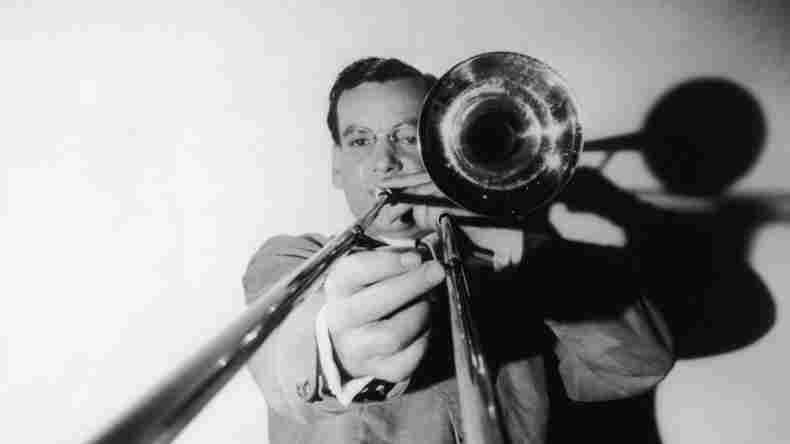 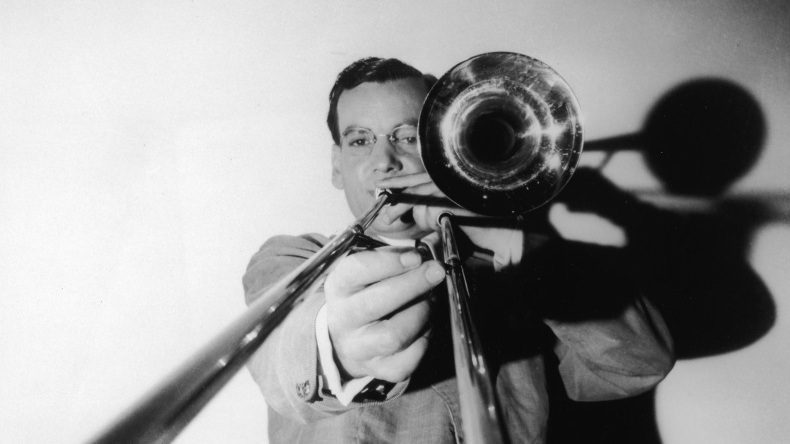 The great jazz musician and band leader Glenn Miller with his trombone.

If you believe that vigorous dancing sometimes leads to `other things,' then Glenn Miller deserves at least a little of the credit for the baby boom, and the new jitterbuggers, the swing revivalists, owe the man a debt of gratitude as well.

Glenn Miller's 1939 hit recording of "In the Mood" made NPR's list of the 100 most important American musical works of the 20th century. Glenn Miller didn't write "In the Mood"; the composing credit goes to Joe Garland.

David Miller is not related to Glenn Miller, but he counts that among his life's disappointments. What David Miller is, is a professional swing fan, literally. It was his love of big band music that drove him to become a radio host. For nearly 20 years, he's produced the weekly syndicated show "Swinging Down the Lane" from his home in Little Rock, Arkansas. And he hosts big band cruises on the QE2. David Miller says he gets more requests for "In the Mood" than just about anything else, and he admits that even a die-hard like himself gets a little tired of it.

"Honestly, I do, and I'll tell you why," David Miller starts. "My wife bought me one of those plastic plants with a motion detector in it. And so in my studio, every time I walk past that plant, it breaks into "In the Mood," and I've got to the point where I've turned it toward the wall in hopes that it won't recognize that I'm coming into the room."

Plastic plant notwithstanding, it doesn't take any arm-twisting to get David Miller to wax eloquent about Glenn Miller's "In the Mood"; the way it showcases Tex Beneke and Al Clink, two band members who have a saxophone face-off in the middle of the song; the way the musicians play more and more quietly towards the end of the number, mounting the tension before coming back for that rousing finish. But, Miller points out, there's something more elemental about its appeal and its endurance.

"'In the Mood' is built on a very simple, understandable little riff. It's exquisite, but it's simple. Someone can listen to it once and they can remember that riff."

OK, but with that riff in mind, focus your attention for a moment on the song "Tar Paper Stomp." It was recorded in 1930 by Wingy Manone, the famed one-armed trumpet player from New Orleans, nine years before Glenn Miller would play, or record, "In the Mood." Note also Fletcher Henderson's recording of "Hot and Anxious" from 1931. Don Redman recorded it, too, the following year. Jump ahead another three, to 1935, and you stumble upon, "There's Rhythm in Harlem," by the Mills Blue Rhythm Band. So who did write the basic musical theme that we think of as "In the Mood"?

"In those days, it was very difficult to pin down who composed what," David Miller says.

In fact, David Miller likes to say, the guy who got the writing credit was sometimes just the guy who wrote it down.

"People were very lax about getting copyrights; and, in fact, the people who were writing songs in those days were almost itinerants. They would put together something and take it around and try to peddle it to the important band leaders of the day. And they may have heard something and unconsciously incorporated the same phrasing into a tune that they called their own. And I suspect that's what happens."

Musicians traveling from city to city and band to band, leaving threads of music in their wake to be picked up and stitched into new compositions. In other words, there is no way to know who wrote that famous riff. Composer Joe Garland almost certainly did not, but when he integrated it into his own composition "In the Mood," he was savvy enough to get the song copyrighted. "In the Mood" was first recorded in 1938 by the Edgar Hayes Band, the band in which Joe Garland played sax. It's pretty different from Glenn Miller's, but some of the trademarks are there, like those bracing introductory bars signaling the dancers to wake up.

So why didn't Edgar Hayes' "In the Mood" become every jitterbugger's favorite? Well, race is a likely suspect, or at least a contributing factor. Edgar Hayes, Joe Garland, Fletcher Henderson, the Mills Blue Rhythm Band, all in the musicians in this story so far except Wingy Minone, were black, and black musicians couldn't play the big ballrooms back in the day. They were also exiled to so-called race records by the recording industry and didn't have much of a shot at getting played on radio. So just about the only chance a black composer like Joe Garland had to make good money was to peddle his music to white bandleaders.

When Joe Garland set out with "In the Mood" under his arm, the first door he knocked on was Artie Shaw's. Shaw says he didn't record it because it was six minutes long, too long to fit on one side of a 78. But he did play it at least once on the radio. What you're hearing is a copy of that 1938 broadcast that David Miller has in his collection.

"It's very interesting to listen to the Shaw version. First off, it goes at a much slower tempo, but it still swings. It would be great for slow jitterbugging, as opposed to Glenn Miller's much faster tempo, which is also great for jitterbugging, but of the more athletic quality. Also, there are some melody lines that were simply chopped out by Glenn Miller, and I would say that Glenn used very good judgment--or whoever it was that arranged it for him--in dropping out those lines because they tend to get a little bit tedious. Now maybe it's because we're used to the three-minute version, but I know as I listen to it, I think, `Oh, well, that's the ending, they must be--no, wait a minute, they're still playing. No, they've got another little riff that they're throwing in there.'"

Trombonist Paul Tanner says he witnessed the whittling down of "In the Mood," and it's a story he loves to tell, almost as much as the one about how he came to be an original member of the Miller Orchestra. He was 19, playing in a `joint,' to use his term, in Atlantic City, a place you might not expect to find squeaky-clean Glenn Miller.

"It was what was known as a strip joint," Mr. Tanner explains. "The ladies were disrobing for the entertainment of the customers. And so somebody told Miller, `You want to hear a trombone player? Come in and hear this kid.' So he did. And he said, `Well, how soon can you come with me?' I said, `I can come right now.' I told him I was all packed, I had my toothbrush in my pocket and everything. And so I went with him that night, and I stayed with him until he broke the band up in September 1942. Actually, there were four of us that did everything the band did, every record, every one-nighter, every radio program and everything; there were four of us that did everything."

Paul Tanner is the only one of those four still alive. He's now 82 and retired after 23 years of teaching music at UCLA. He's just written a book about his Miller days; it's called "Sideman: Stories About the Band." Paul Tanner says he can picture clearly the day Joe Garland showed up at the Glenn Island Casino, where they were playing, to make his pitch for "In the Mood."

Oddly, though, there is no arranger listed for "In the Mood." It's a curious omission because the rest of the Glenn Miller discography is so thoroughly detailed. There are jazz experts who believe that Glenn Miller hired an arranger named Eddie Durham for the job. Phil Schaap, for one, says he can hear Durham's work in the arrangement. Paul Tanner says that's just not so.

"Well, Glenn was buying some things from Durham, some things like "Glenn Island Special," and things like that, and Glenn liked Durham's arranging. But Eddie Durham didn't have anything to do with "In the Mood.""

Tanner remembers Glenn Miller arranging the tune at rehearsal, on the spot.

"He would say, `You fellas do this, and you fellas do that, and let's hear it once.' And then, `We're gonna cut from this spot to this spot in the arrangement, and in here we're gonna put a trumpet solo. And in this spot and this spot we're gonna cut way down here and we're gonna have the two saxophones have a little battle in there,' and decided to make cuts. And then at the end, Alice, if you know the arrangement, at the end there are all those false endings that go on, and it kept getting softer and softer until Glenn would give the drummer a clue and he would hit the cowbell and then we would know that the next time we were to come on very loud. And the dancers just loved it. He tried it out on the dances at the Glenn Island Casino, and they loved it. They couldn't figure out how we knew when to come in loud. But, you know, I told them, `Well, we have a sixth sense of that sort of thing.' But actually, what happened is the drummer hit the cowbell, and we knew the next time was loud. And this was all Glenn's doing."

Paul Tanner says it always tickles him that today's dancers seem to have that arrangement internalized in their feet. And when he listens to the 1939 recording on which he played trombone, it's easy for him to be transported back to the bandstand playing to an ecstatic crowd.

"Well, there's the introduction of "In the Mood," and by this time all the dancers have recognized it and are getting up on the floor and they're getting ready to jitterbug and have a go at it. Now they're doing it; now they're jitterbugging, everybody from the Savoy Ballroom to the big luxury cruises, they're all jitterbugging. And the dance floor is crowded."

There is a long list of musicians, band leaders, composers and arrangers whose names lead a path to Glenn Miller's 1939 recording of "In the Mood." But when you're jitterbugging or even just tapping your feet, they all blend together into three perfect minutes.