Accessibility links
'Tom Dooley' The Kingston Trio made the song a hit in 1958, but it's an old folk song about a murder that happened in 1866.

Performed by the Kingston Trio 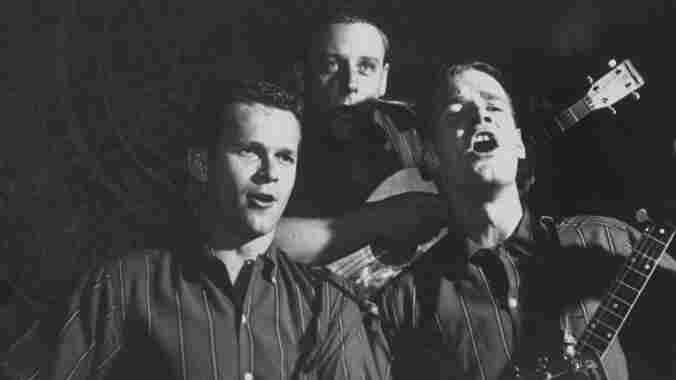 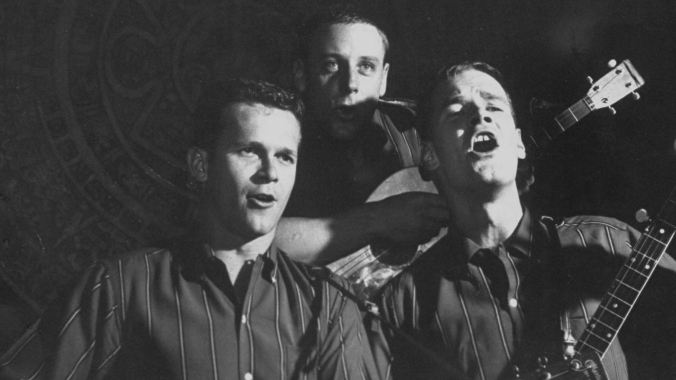 The Kingston Trio performing on stage.

"Tom Dooley" was performed by three young men who had started singing folk music together in college bars in the Bay Area of San Francisco. In 1958, The Kingston Trio had their first hit record.

"Throughout history," the Kingston Trio's recording begins, "there have been many songs written about the eternal triangle. This next one tells the story of a Mr. Grayson, a beautiful woman and a condemned man named Tom Dooley. When the sun rises tomorrow, Tom Dooley must hang."

Tom Dooley was a real person. Laura Foster was his lover. Out in North Carolina in May of 1866, she was killed. It was thought that Tom stabbed her and buried her body and fled to Tennessee. He worked there on Mr. Grayson's farm until his true identity was discovered. In 1868, Tom Dooley, judged guilty of murder, was put to death. The song says he was hanging from a white oak tree, but, in fact, it was a gallows outside the courthouse in Statesville.

A century later because of "Tom Dooley," The Kingston Trio made the cover of Life magazine. The song was part of their club act and it was on their first album. Bob Shane is an original member of the trio.

It was amazing. You know, one day we were playing in a club in Hawaii and the next day we're in a ticker tape parade in Salt Lake City.

There was a radio station in Salt Lake City--two guys there who really liked the song and started playing it a lot and that's what started it.

"It was Paul Colburn and Bill Terry, and they started playing the song. And they had friends who were disc jockeys around the country and they thought this was a great alternative thing because it was catchy and it said something profound, you know, and people were really digging it. So they called their friends around the country and said, `Get on this record.'"

"Tom walked on a path that went back over there behind Lauria Foster's house. He walked back down there, and about five or six people saw him that morning," says professor John Foster West. You can go to northwestern North Carolina and see this story through the eyes of West; he's a retired English teacher and the author of a book about Tom Dooley. The Dooley name is still common here. It's spelled D-U-L-A. Professor West grew up in this valley, close to the Yadkin River. He says the countryside has scarcely changed since the murder, which was just a year after the Civil War ended.

"The old story was that she was carried on a sheet between two poles, down this ridge over here, and he'd already dug a grave the day before, back right down here right by his mother's house. Right down that ridge over there."

Tom Dooley served in the Confederate army and came home still young and good-looking. He was Laura Foster's lover, and she left her house that day before sunrise, telling a neighbor along the way, `We're fixin' to get married.' When she reached the meeting place, she was killed. It could have been Tom. It could have been Tom's other girlfriend, Anne Melton. And then there was Pauline Foster, who was also involved with Tom. John Foster West has examined the court documents.

"There's a good motive. Tom Dooley, Laura Foster and Anne Melton and Pauline Foster all had syphilis. You know, they didn't know that for 100 years here? They don't like me down here because I was the first one to ever discover that sweet little old Laurie Foster had syphilis."

And that story goes this way. Pauline Foster, Laura's cousin, had been visiting from a neighboring county. She came to see a doctor. She had syphilis and gave it to Tom. But Tom was angry at Laura, believing she was the one who had infected him. Anne Melton, in addition to having syphilis, was jealous of Laura Foster.

The syphilis part of the Tom Dooley legend is not mentioned at the nearby Tom Dooley Art Museum on Edith Carter's farm. It's on the top floor of a log schoolhouse. Mrs. Carter has paintings of Tom and Laura Foster, a lock of Laura's hair and the original Tom Dooley tombstone. School children love to come by and hear the spooky stories.

"We turn the lights out, and we tell all the ghostly stories that happened up on the Tom Dooley Road. Like the old Tom Dooley house, you know, the doors would creak and chains rattling, because Tom Dooley's blood was on the floor. I think they brought his body home from Statesville after he'd been hung. His body swelled and burst, and blood ran on the floor. And they were never able to get that blood up off the floor ever again."

The wind down the Yadkin Valley spilling past the old buildings sounds
the same as it did a century ago. And the Dooley-Foster melodrama, in local
versions of the song, seems almost as alive.

Folk musician Bobby MacMillan says back then a song was a way of telling the news.

"In those days, when you had something sensational like that, you had so many people singing, it was just a whole different atmosphere than today. People sang when they went out in the fields to plow and anything new that would happen--if they didn't come up with something on their own right then, there would be something else that they could adapt. For instance, the song "The Knoxville Girl," which was about a girl murdered in Knoxville and her body thrown in the river, is a variant of another one that was called "The Lexford Girl" in Ireland. And "The Widow Miller" in England. Some called it "The Bloody Miller" but he always killed this girl allegedly because he loved her so well."

"This is a black one. It's fretless, homemade, mountain banjo. We call them banjos around here, you know. And scuffed, old-timey sound, backwoods, they call it, some people," says Frank Profit Jr. on a couch in a small house down the road from the top of Snake Mountain. This is even deeper into northwest North Carolina. Mr. Profit knows the song on a banjo the way his father played it. Frank Profit Sr. learned it from his father, Wiley Profit, who had got it from his mother, who was 12 years old when Tom Dooley was hanged in Statesville. And she saw that event.

Here's how "Tom Dooley" gets to The Kingston Trio. A song collector comes to North Carolina in 1938. Frank Profit Sr. walks eight miles over the mountain and sings "Tom Dooley" for the collector. His name is Frank Warner. The song is published in 1947 by folklorist Alan Lomax, with credit to Frank Warner. The Kingston Trio recording was not the first, but the time had come for "Tom Dooley" to be a hit. Frank Profit recalls the first time his father realized what had happened. The family was at home on Sunday night.

"It was on TV. We'd just got a TV set, had it about two months, an old, used Sylvania we got at Ray Farthan's furniture store. He was into TVs and radios, too. And Dad got it for $15. And we bought an antenna and watching "The Ed Sullivan Show," kind of snowy, you know, the picture and everything. The sound was real, real good. And they come on there, he introduced them, these three young fellows. And they come on there singing "Tom Dooley," and Dad squatted down in front of the television and said, `What in the'--well, I won't use the word. `What's going on here?' I didn't know what--I'd never heard much about it, you know? I didn't know much about "Tom Dooley" or the story. I just thought it was another song."

"And then about a couple of days later, somebody comes up to the house from a store about a mile away and said, `Frank, you got a call, long distance.' `What in the world,' he said, `could that be?' It was Frank Warner calling from his home up on Long Island."

There was a lawsuit for royalties and a compromise. Frank Warner, Alan Lomax and Frank Profit Sr. would get some money on some sales after 1962. That is, after the song had already sold four million copies.

Frank Profit Jr., like his father, does some singing around the country at folk and old-time music festivals. And he sings his family's version of "Tom Dooley."