Accessibility links
'One O'Clock Jump' Basie came to New York City in 1936, and used elements of blues and jazz in the newer sounds of swing and big band.

As performed by the Count Basie Orchestra 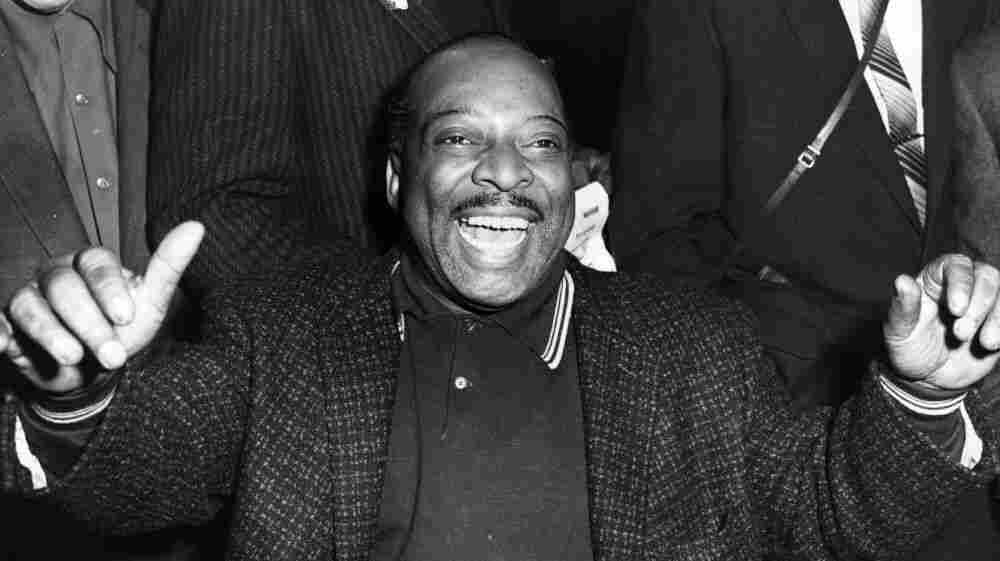 Count Basie performs at the Royal Festival Hall in London. He and his band are embarking on a tour of Britain, and this is their first venue. Ron Case/Getty Images hide caption 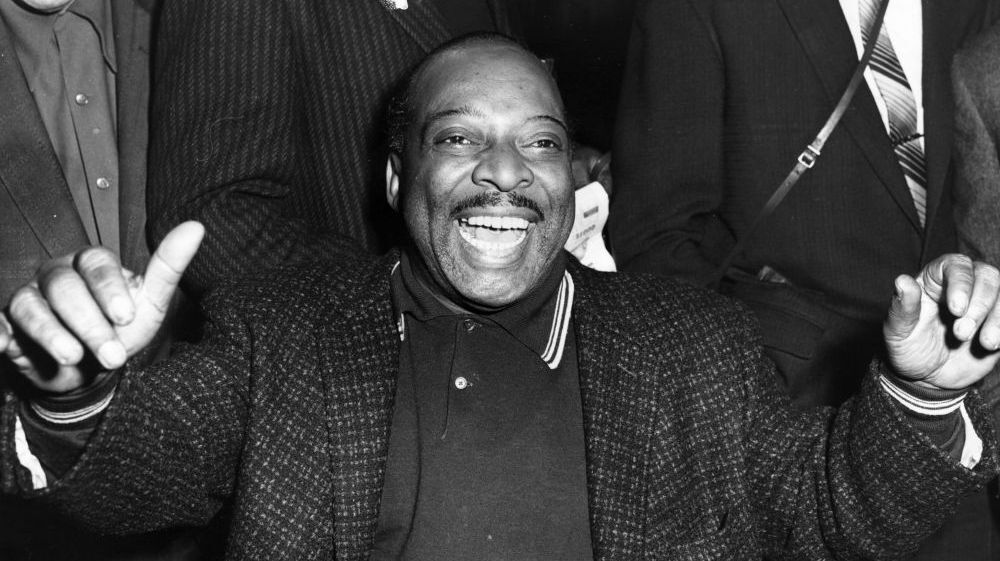 Count Basie performs at the Royal Festival Hall in London. He and his band are embarking on a tour of Britain, and this is their first venue.

Count Basie was born on this day in 1904. He was a musical pioneer shaping the sound of jazz and swing, first in Kansas City and then later in New York. He headed one of the most celebrated big bands in history, the Count Basie Orchestra. The band's theme song was "One O'Clock Jump," which Basie played in thousands of performances over most of his career.

By the time Count Basie and his band went into the recording studio on July 7th, 1937, they'd already made a handful of records, but "One O'Clock Jump" was the tune that caught on with the public. Phil Schapp teaches jazz history at Princeton University.

"It's the record that announces that the Basie Band has arrived," Mr. Schapp explains, "that their message of the way swing is phrased in Kansas City, Missouri, has been synthesized to a big band context which was the norm of the period and now had been perfected.

Count Basie arrived in New York at the end of 1936 with a 15-piece orchestra. On June 29th, 1937, the Basie Band opened for the first time at New York's premier dance hall, the Savoy Ballroom in Harlem. Alto saxophonist Earl Warren led the reed section. In 1983, after a 1 AM performance, Warren remembered that first gig at the Savoy.

"We got into Savoy, but we had already acclaimed ourself as the finest swing band in the land, never mind the king of swing. That was some jive. We were the kings, and therefore, we were really in demand for the Savoy, because when we went into the Savoy, you couldn't get in there. You just couldn't get in there, man. It was just one of the most fantastic things you ever saw in your life. Boy, I used to come out of there wringing wet all the time, all the time, because when we got up on that bandstand, we blew."

Earl Warren died in 1984. All the other members of that original Basie Orchestra are gone as well, but their sound is very much alive in the memory of 84-year-old Albert Murray who heard them on 1930s radio broadcasts while he was a student at Tuskegee University. Murray, who co-authored Basie's autobiography, says what set that band apart was that the musicians took the Missouri blues and made it swing, propelled by a rhythm section with the drive and precision of a steam locomotive.

" In Kansas City in the Southwest, in that whole area out there, they particularly called that music, you know, stomps, shouts and that particular element of the blues idiom; that is, the whole context of the blues, whole down-home context of the blues which goes back to the locomotive that underlies the guy strolling with the guitar: chugga, chugga, chugga, chugga. Hey, Count Basie played that train whistle all of his life. And I was telling him about it. I said, `Man, you ever play bom, bom.' I mean, he'd play a train bell going out and saying bom, bom, chu, chu, bom, bom, bom, chu, chu, chu, bom, chu and wow, wap, wap, talk about'--it's a train whistle. Like he's stylizing everyday experience and your everyday surroundings. And the basis of blues and jazz seniority was the locomotive, the locomotive beat."

And like just about every bandleader in those days, Murray says, Basie took credit for the songs written by members of his group.

"But when you did something, it belonged to the bandleader. If you turned it in, they recorded it or published it, it would (unintelligible) in those days, you see? So it was a case of the jazz musicians saying, `OK. What do you want? You want 50 percent of a hundred dollars or 100 percent of nothing?'"

The main theme of "One O'Clock Jump" was lifted by Basie alto player Buster Smith from a 1929 Fats Waller tune called "Six or Seven Times."

Smith and Eddie Durham arranged a series of repeated phrases or riffs leading up to the "Six or Seven Times" theme. Basie adopted "One O'Clock Jump" as his signature theme. He recorded it many times and played it at the end of every performance for almost half a century.

"I played "One O'Clock Jump," yeah, about 5,100 times in my entire career," says Basie's arranger, tenor player, and eventual bandleader Frank foster. But he says he never got tired of performing it. Foster says the most remarkable aspect of "One O'Clock Jump" is its riff structure, a series of simple 12-bar phrases that gather intensity as the tune moves forward.

"There were at least five different riffs. You know, there was one riff of saxophones used behind the trombone solo. Another riff the trumpets used behind the saxophone solo. And another ensemble chorus which consisted of about three different riffs: the saxophone section doing one, the trombones doing another, and the trumpets doing another one. The trombones already been saying, `Dah, bye,' while the trumpet said, `Bedi, di, di, di, di,' and the saxophone was saying, `Ba, dada, did, did.' And they'd combine the whole thing, and all the riffs overlapped and blended with each other to make an entire ensemble chord."

"One O'Clock Jump" originally had a different title. Co-arranger Eddie Durham called it "Blue Ball"(ph) but the musicians in the band referred to the tune with a more scatological variation. When the band began performing at Kansas City's Reno Club in 1935 where their set was broadcast by a local radio station, the title became a problem, says historian Phil Schapp.

" The radio announcer, confronted with what Count Basie said, `We're going to play "Blue Ball,"' says, `I don't know about that. I don't think I can say that on the air.' And because of the air time connection being near 1:00 in the morning, they called it the 'One O'Clock Jump.'"

"One O'Clock Jump" became a huge hit that had an impact on all of the big bands. Benny Goodman and Duke Ellington recorded their own versions, and the song's driving Kansas City four-four rhythm became one of the hallmarks of swing. For NPR News, I'm Tom Vitale in New York.