Accessibility links
The Story Behind 'Purple Haze' The iconic rocker was written during a 1966 gig at a London club, with lyrics based on a dream he had after reading a science fiction novel.

"Move Over and Let Me Dance," The Isley Brothers 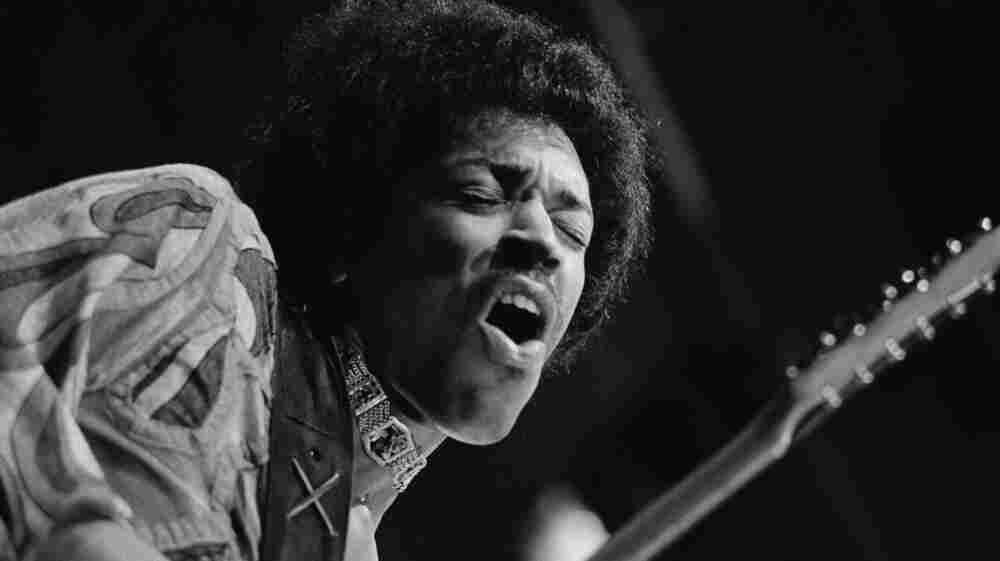 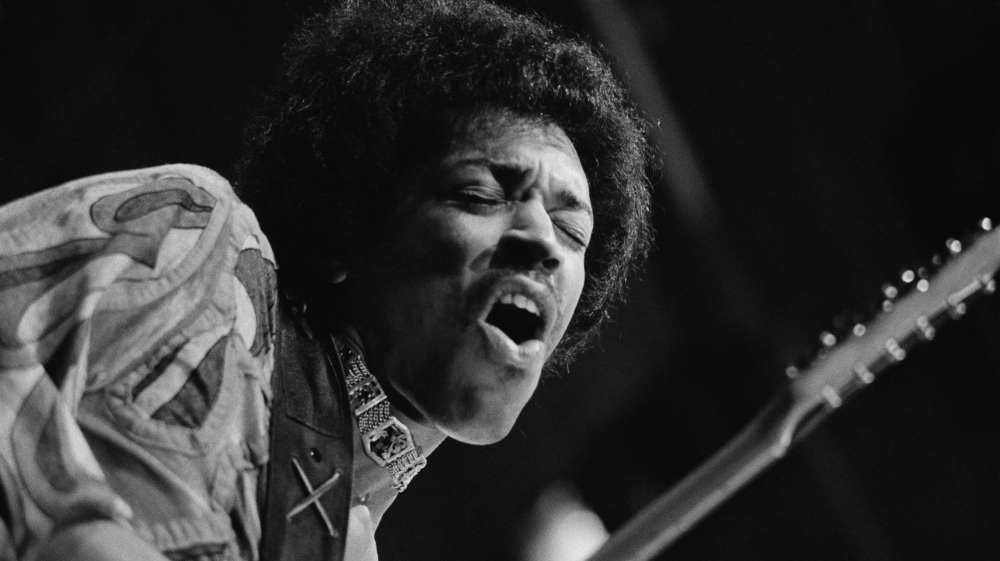 Jimi Hendrix during his performance at the Isle of Wight Festival, August 1970.

Thirty years ago today, Jimi Hendrix died of a drug overdose in London. He was 27 years old. Hendrix's music and on-stage antics, loud, turbulent and sexual, came to symbolize the 1960s. But Hendrix was also a gifted musician and one of the most innovative and influential electric guitarists in history.

Jimi Hendrix once said, "When I die, I want people to just play my music, go wild and freak out, do anything they want to do." OK. So how about "Purple Haze" for a string quartet... or flute...or for bluegrass... or even classical guitarist? They've all been done. But if you want to hear "Purple Haze" on the instrument it was written for, there's really only one place to go: Hendrix's original.

For more than three decades, this music has inspired and humbled guitar players everywhere. From the first time blues-rock guitarist Mike Bloomfield saw Hendrix play, he didn't want to pick up his guitar for a year. For Vernon Reid, a guitarist and record producer who played with the rock band Living Color, Hendrix challenged him to think, "What's next?"

As a kid in Seattle, Jimi Hendrix taught himself to play by listening to blues greats Muddy Waters and Howlin' Wolf. He played in high school band and, later, after a stint in the Army, found work as a backup musician, touring with rock and rhythm and blues artists Little Richard, King Curtis and the Isley Brothers. But a sideman has to play exactly what he's told. Hendrix quickly lost patience with this.

For Hendrix, this style of playing got old fast, so he quit and moved to New York, where he tried to survive by playing small clubs in Greenwich Village. It was there that he developed the foundations of his style, a loud fast mix of blues and R&B. But not many people were listening, until one night when Chas Chandler stopped by. Chandler had recently left the popular British band The Animals to try his hand at producing. In Jimi Hendrix, he saw his first potential client.

"It's all about facilitating Hendrix's talent," says Hendrix biographer John McDermott. "I think what Chandler realized is that with some parameters, this man is a tremendous artist, and I think he was smart enough to recognize 'I need to get this rhythm section around him, we need to be in a good studio,' and it'll all take care of itself."

Chandler insisted Hendrix return with him to England, where they immediately held auditions for a backing band to be called The Jimi Hendrix Experience. At first, it had nothing to do with experience. Bassist Noel Redding had never actually played the bass before. He was a guitarist. And drummer Mitch Mitchell, whose background was jazz, was chosen by a coin toss. But the three men soon got comfortable, and their first single, a cover of the song "Hey, Joe," was released that November and quickly became a hit in England.

In 1966, England was the perfect place for Hendrix. The Rolling Stones had already popularized American blues, and young people there were starting to see the possibilities of the electric guitar in the playing of Eric Clapton and Jeff Beck. But even the best guitarists of the day worked, for the most part, within a standard blues structure. Hendrix wanted to do something completely different. John McDermott says Chas Chandler spent hours listening to Hendrix experiment with riffs.

"Jimi was playing a small club date in London and was backstage toying with the riff of 'Purple Haze,' and Chas, you know, being there, heard it immediately and said, 'Write the rest of that. That's the next single.' Because I think he had heard enough of Jimi, even in the two or three months that they were together, to know that that is something very special, work on that."

Hendrix did. Soon, he had 10 pages of lyrics. In a late 1960s interview, Hendrix remembered an early draft of the song.

"Oh, ooh, you should hear the real 'Purple Haze,'" Hendrix said in a vintage interview. "It has about 10 verses. But it goes into different changes. You know, it isn't just 'Purple haze, all in my' --you know, blah, blah, blah."

He explained later that the idea for the words to "Purple Haze" came to him in a dream after he had read a science fiction novel. Fans and critics have spent years trying to decipher the song's meaning. Hendrix himself pointed to the one line at the end of the second verse: "Never happy or in misery / Whatever it is, that girl
put a spell on me."

With Chandler's help, Hendrix edited the song down to three minutes and the Experience cut a demo. Then with money from the sales of "Hey, Joe," Chandler moved the band to Olympic, a new studio across town, where they were matched up with an adventurous young engineer named Eddie Kramer.

"The studio manager said to me one day, 'You know, Eddie, there's this American chappie with big hair called Jimi Hendrix,'" Kramer remembers. "You do all that weird stuff so why don't you do this, you know?' It was very English and very proper, and we hit it off. I mean, it was just a good feeling. He was very shy. When he stepped out on the studio floor and, you know, plugged in — oh, my God, it was just a revelation for me. You know, I'd never heard anything quite like it."

Hendrix immediately liked Kramer and his willingness to experiment, and both quickly learned Chandler's one rule in the studio: There were no rules. For example, who says you're always supposed to record at normal speed? There's a high-pitch guitar at the end of "Purple Haze" that sounds almost like a mandolin. Kramer explains that to get it, he set the tape recorder to half-speed: "If you played a fairly rapid figure at half-speed, it would be really silly fast at high speed, and that's what it was."

Hendrix had such a deep understanding of the guitar that he knew his own solos backwards and forwards. And since he didn't have a day of formal musical training to his credit, Hendrix came up with his own method of teaching his songs to his band mates.

"A sort of large legal pad with copious notes of first of all," Kramer says. "You know, the lyric content possibly, and then he would describe in detail where certain things would be happening in the song, 'OK, drum hits here, bass drum pattern here' and there would be a map of the song."

And even though the technology was primitive, Hendrix experimented endlessly with sound, working with effects boxes that were built especially for him. During his live shows, he turned up his amplifiers and got sounds out of his guitar that no one had ever heard before.

One more thing: Hendrix was left-handed, so he restrung his guitar and turned it upside down. But as comfortable as Hendrix was with a guitar in his hand, Eddie Kramer remembers that he dreaded stepping in front of a microphone.

"He hated the way he sounded," says Kramer. "He thought he had the worst voice in the world. He was embarrassed about his vocal performance; so much so that I had to build a series of screens — three sides — facing away from the control room windows so nobody could see what he was doing. We had to turn all the lights off in the studio, except for a little light where he had his lyrics, and he would do the take and we would stop and he would poke his head around the side of the screen and say, 'Hey, how was that? Was that all right? Are you sure it's OK?' And I'd say, 'Jimi, it was great, it was great. Yeah. Come on, let's go. Keep doing it.' 'Oh, all right. OK. Well, we'll do one more then.'"

In March of 1967, "Purple Haze," the single, was released in England and shot up the charts. Three months later, the Experience gave its first U.S. performance at the Monterey Pop Festival. It was at this show that Hendrix doused his guitar with lighter fluid and set it on fire. The moment was captured on film and Jimi Hendrix became a star in America.

Not everyone was impressed. Hendrix's on-stage behavior, which, in addition to pyrotechnics, included unmistakably sexual gestures involving his guitar, led one well-known rock critic to dub him "a psychedelic Uncle Tom." In an interview from a 1973 documentary, Hendrix explained he had no time for that kind of criticism.

"I don't care, man," Hendrix said in the interview. "I don't care anymore what they say anymore. It's up to them then if they want to mess up the evening by looking at one thing. You know, because all that is included, man. When I feel like playing with my teeth, I do it, because I feel like it, you know? All that is complete when I'm on stage, I'm a complete natural, more so than, you know, talking to a group of people or something."

While Hendrix rarely expressed himself in racial terms, Vernon Reid says he totally changed the parameters of what black art could be.

"He was unabashedly sexual," says Reid. "He didn't apologize to black people for being wild, and he didn't apologize — he certainly didn't ask for permission from white people. He laid down a gauntlet, you know, he said, 'Are you prepared to be free?'"

Eddie Kramer remembers feeling something similar as he watched Hendrix in the studio.

"The brain to the heart to the hands to the feet, it was one fluid motion," Kramer says. "There was never any question, never any doubt as to where he would put his hands on the guitar, what sound would come out. And I don't think there is any musician that I've worked with in the last 30-odd years that has ever come close to that."

Nor have there been many musicians who accomplished so much in such a short time.

"You know, here was a guy who, in essentially four years, changed the face of rock 'n' roll, re-interpreted the role of the electric guitar in that music. And it's four years, you know?" says McDermott. "So I think that had he been able to have a lengthy career, it's impossible to think about, you know, what he would have done. I mean, you know, people live their lives to figure that out."

In August of 1970, a month before his death, Hendrix told an interviewer, "I'm back where I started. I've given this music everything but I still sound the same." He went on to say, "Something new has to come, and Jimi Hendrix will be there." You might say he never left.