As performed by the Modern Jazz Quartet 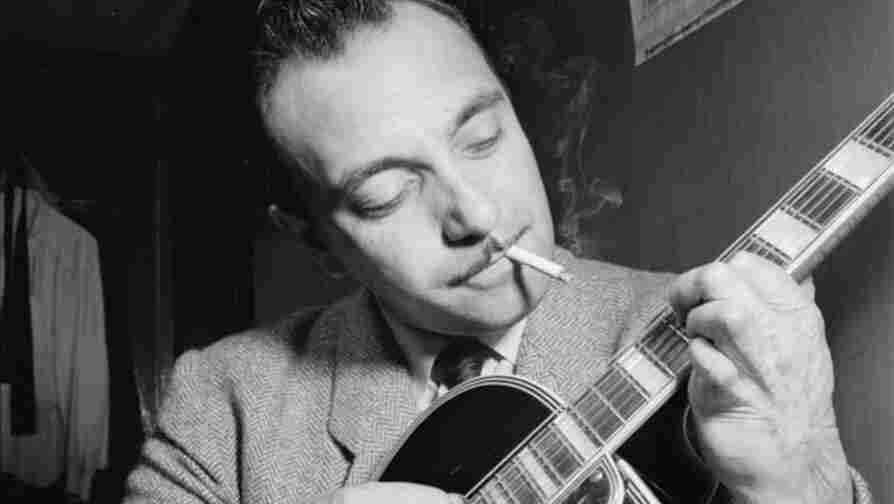 Django Reinhardt with his instrument. Courtesy of the artist. hide caption 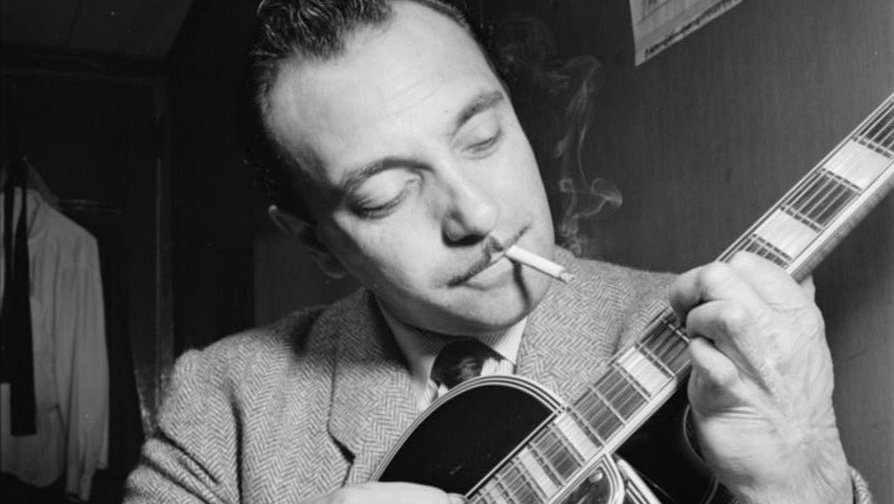 Django Reinhardt with his instrument.

"He was the first great European jazz musician," Mr. Lewis says. "Really music was it. That was him. He and music were synonymous. That's what he did."

Django's guitar playing as it turns barely audible, tender, melancholy, and then--Bam!--an exuberant shout of a chord, and a mile-a-minute string of notes as though he just couldn't contain himself.

Django--no one used his last name--was born in a caravan near Lervashi, Belgium, in 1910 to a family of Roma, the proper term for Gypsy. He probably learned to play the guitar at a very young age because music was one of the few ways the Roma had to support themselves. It's something of a miracle he could play at all. When he was about 18, a fire tore through his caravan and he was seriously burned. Two fingers on his left hand, the hand he used to press the strings to the neck of the guitar to form notes, were burned so badly that they were permanently bent and almost unusable. What he did with the other two fingers and his thumb and the blinding speed of his right hand picking has confounded musicians and listeners ever since. He turned disadvantage to advantage and became a star in Europe.

"He was very elegant with a lot of high class appearing," says Pierre Michelot, who played bass with Django for the last few years of the guitarist's life. "He was very nice, very simple. And he was loving to be with musicians. That was his life."

Django took the traditional Roma way of playing guitar, powerful chording and staccato melodies that imitated the violinists, and married it to jazz, creating a style all his own. In 1934, he formed the hugely popular quintet of The Hot Club of France with violinist Stephane Grappelli.

John Lewis was eight years old when Django was burned in the caravan fire. His life was very different Django's nomadic existence. Lewis was raised in a middle-class home in Albuquerque, New Mexico. And life proceeded on a fairly comfortable path that led to studies in anthropology and music at college. Then World War II broke out. At about the same time Django was devising schemes to dupe the Nazis, who actively persecuted the Roma, John Lewis got drafted. He was assigned to a special service unit, playing for the troops behind the front lines. He landed in Normandy 10 days after D-Day.

Lewis' company made it through the bullets and rain to a small village near Rhone. One day, he went into the city.

"There was a bar that had a jukebox. And I saw a record in it and so I put my franc in there, and played this record. It was a duet with Bill Coleman and Django Reinhardt, and, well, never heard any guitar playing like--you know, I couldn't believe it. I knew about him and The Hot Club. I really wasn't all that thrilled with what they did, but I never heard that much energy. This man was literally playing himself into creating this--you're going to pay attention to me."

Not long after hearing that record, Lewis got to see Django perform in Paris. Three years later, they were both in New York; Lewis playing with Dizzy Gillespie and Django with Duke Ellington. The guitarist went to hear the Gillespie big band and just sat in the audience enraptured. Lewis says that some nights, they would literally have to push Django out the door so he'd make his gig with Ellington.

"He wanted to play this American music more than anybody I--our own people."

Django went back to Paris. John Lewis and the rest of the Gillespie rhythm section--vibraphonist Milt Jackson, bassist Ray Brown, soon replaced by Percy Heath, and drummer Kenny Clarke, later replaced by Connie Kaye—formed their own group. It came to be called The Modern Jazz Quartet.

John Lewis wanted to move beyond the standard play the melody, each musician take a solo, then play the melody out structure of bebop. Lewis wanted to create a situation in which each member of the quartet had a chance to interact, so he wrote arrangements that drew on his love of Bach, Mozart and Haydn. He used counterpoint and polyphony. It brought a new sound to jazz, but John Lewis doesn't much like to talk about how he did it.

"I don't know if--where all this--that comes from and all. But I accept it and just take it, and I'm grateful for it."

Some critics were less than grateful. Lewis' blend of jazz and classical was derided as a corruption of both styles. But audiences loved it.

In Paris, a revolution of a different sort was taking place in Django Reinhardt's music; a revolution inspired, says bassist Pierre Michelot, by what Django had heard in New York.

"Django, at the end of his life, was in the process of changing his music, of becoming--I don't want to say modern, but he adored the bebop records--Dizzy Gillespie, Charlie Parker, Thelonious Monk," Mr. Michelot says. "He was crazy about that music, and he was in full revolution when he disappeared."

Django Reinhardt died on May 16th, 1953, after spending a day fishing on the Seine. He was 43 years old. John Lewis read about it in the New York papers.

"It broke my heart. I said, `I'm not going to hear this anymore,' and I just--oh, because every time I had the opportunity to hear him play, I'd go because I was going to hear something new that he'd found another way to take it to."

So Lewis wrote "Django" and recorded it with The Modern Jazz Quartet a year after the guitarist's death.

Guitarist Jim Hall has known Lewis since 1956. Hall, whose dog is named Django, says that if you look at the tune "Django" as a classical composition, it's almost perfect.

This tune has a beautifully constructed melody. It starts out with a kind of a simple motive in F-minor. Kind of a slightly sad idea for a melody, and then so it's this, and then there's a sequence, which is up a second, except that goes up instead of down. So first, it's this perfect answer and then it continues. It's going into the relative major key, if anybody cares, now it has some surprises. It has a great arrival point, that high G, and then it winds its way down. Almost sounds like he's saying Django's name here. And then the same thing an octave lower. So that's the tune anyway. It has kind of simple chords, but beautiful."

After the opening melodic section, "Django" shifts into an improvised section. Composer, conductor and jazz historian Gunther Schuller has known John Lewis for more than 50 years.

"The miracle in the piece is then he takes that same material, doubles the tempo and makes it swing like mad. Using the same harmonies and then, of course, improvising on those basic chord changes, which are the underlying structure of the whole piece. It's just a perfect piece in that sense."

"Django" resolves to the original melancholy melody at the end, a tender restatement of its composer's sense of loss at never knowing where Django's bebop-fueled fusion of jazz and folk music would have taken him. Django did leave behind several generations of Roma guitarists, many of them brilliant, who have followed closely in his footsteps, but never quite caught up. John Lewis still plays "Django."