Accessibility links
'Porgy and Bess' Was this work by DuBose Heyward and George and Ira Gershwin an opera or a musical, a serious work or a patronizing minstrel show? Deeply divided critics asked similar questions 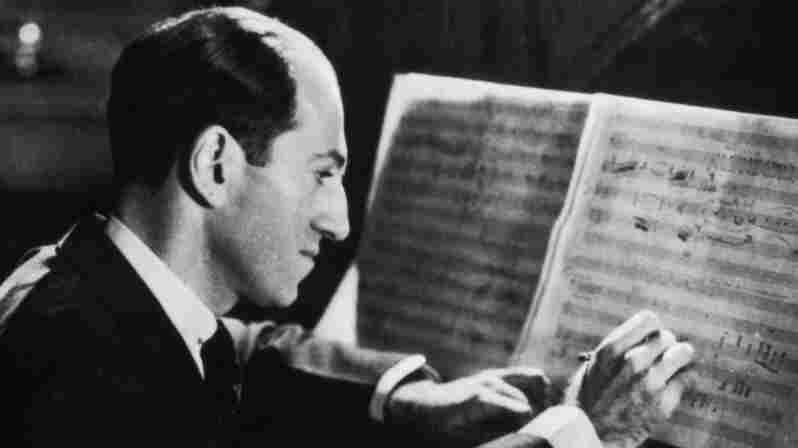 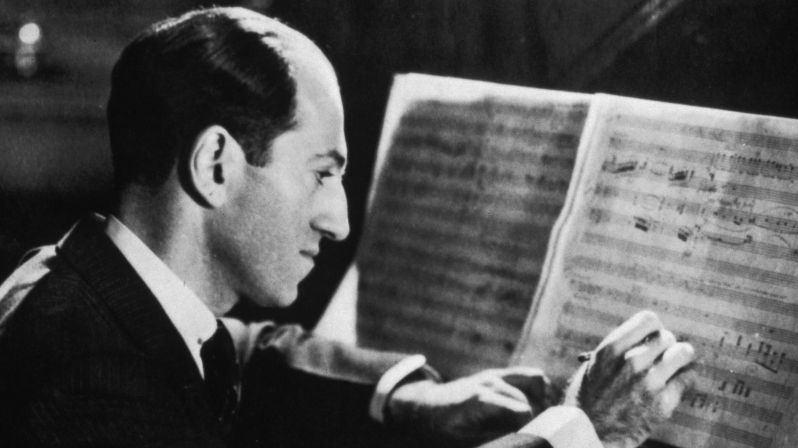 George Gershwin making alterations to the score for 'Porgy and Bess'.

When "Porgy and Bess" opened at the Alvin Theatre on October 10th, 1935, audiences were both excited and confused. Was this work by DuBose Heyward and George and Ira Gershwin an opera or a musical, a serious work or a patronizing minstrel show? Deeply divided critics asked similar questions. "Porgy and Bess" closed after only a few months. So from a commercial perspective, this initial production was a flop. Today, however, "Porgy and Bess" is widely hailed as a classic.

By 1933, George Gershwin was an almost mythic figure in American culture. The 35-year-old composer's jazzy rhythmic music found homes in both Carnegie Hall and on Broadway. His classical compositions, like "Rhapsody in Blue" and "An American in Paris," were quickly becoming orchestral standards, while year after year, he and his lyric-writing brother Ira churned out musical comedy hits, like "Girl Crazy" and "Of Thee I Sing." Gershwin even hosted a popular radio program which featured his own music, as well as that of his peers.

"Good evening, this is George Gershwin speaking," the composer began the broadcast. "Tonight I'm going to play you my latest composition, which I wrote a few months ago down in Palm Beach, Florida. This is a composition in the form of variations on a tune, and the tune is 'I Got Rhythm.'"

But ever since he'd been a young man, George Gershwin yearned to write an opera. He had experimented with the forum in 1922, writing a 20-minute one-act called "Blue Monday." Years later, Gershwin signed a contract with the Metropolitan Opera to adapt "The Dybbuk," a Yiddish play, but had to abandon the project when he couldn't get the rights. He then turned to an idea that had interested him for a while, a 1926 novel by DuBose Heyward called "Porgy." Set in the African-American community of Catfish Row in Charleston, South Carolina, "Porgy" centered around the unlikely pairing of a crippled beggar and a beautiful woman addicted to cocaine. Gershwin thought it had the makings of an opera and wrote to Heyward.

A native of Charleston, DuBose Heyward had based his novel on newspaper accounts of a local panhandler who'd been convicted of murder. The book was a huge success, and Heyward and his wife were adapting it as a stage play. Heyward asked Gershwin if he'd be willing to wait until after the play was finished. Since the composer was involved in other projects, he said yes. The play became a big hit, and for a while songwriters Jerome Kern and Oscar Hammerstein tried turning it into a musical for Al Jolson to perform in blackface.

Gershwin was occupied with other work, but he continued corresponding with Heyward. Towards the end of 1933, the two men finally started working on their folk opera.

According to his brother Ira, George Gershwin wanted to soak up as much of the musical atmosphere of South Carolina as possible.

"George did a lot of research on 'Porgy and Bess.' DuBose and Dorothy Heyward, authors of the play, took him to various churches and plantations on the several occasions George visited Charleston to get the true flavor and character of the singing in that part of the South."

Heyward wrote all the words for the first act, but George felt his lyrics needed polishing and soon brought Ira on board.

Thomas Z. Shepard, who produced a recording of the Houston Grand Opera's landmark production of "Porgy and Bess" in 1976 says that he sees Jewish roots in some of Gershwin's Southern music.

"Do we know what that is? `It ain't necessarily so.' I'm absolutely 100 percent convinced that Gershwin, in writing a number about the Bible, chose Hebrew liturgy."

"In Afro-American music, in blues, in Hasidic music, the so-called fraggish questioning mode, there's this idea of a major chord with a kind of questioning, sad, yearning line over it. Coming back to major again. So he saw the similarities in those
things and was able to weave it into a language, but with lots of substitutions, I mean, great substitute chords, which is one of the things he used to huge effect. I mean, even the same note in a song like "A Woman Is A Sometime Thing," at the end you just have people singing, `Woman is a some time thing, yes, sir,' which could be either something from the blues or could be something very davening (Hebrew spoken), whatever, and it could be from either tradition. But since the chords underneath it, andthe chords keep leading in a very out there way, you know, that's completely fresh and completely George."

Even before the score was finished, Gershwin's attention turned to casting. There were not many opportunities for African-American opera singers in the '30s, and Gershwin's score was demanding. Todd Duncan, a 32-year-old professor of music at Howard University, came up to New York to audition for George Gershwin.

Twenty-two-year-old music student Anne Brown was hired to play Bess. On July 19th, 1935, Gershwin gathered Brown, Duncan and other singers together with an orchestra to read through several sections of the opera.

The Metropolitan Opera offered to produce "Porgy and Bess," but Gershwin turned them down. He preferred to open on Broadway, where he felt the work could reach a larger audience. "Porgy and Bess" began its out-of-town previews in Boston in September of 1935. It was a big hit with audiences, but because it ran for over three hours, Gershwin was forced to make extensive trims to the score. The slimmed-down opera opened on Broadway on October 10th, 1935. Biographer Edward Jablonski says that the premiere garnered unusual attention from the New York press.

Yale music professor Allen Forte believes that some of the criticism came out of jealousy.

"I think Gershwin was serious competition for them, because Thompson and other composers of that era were very interested in establishing an Americana, an American music, with a classical orientation. And Gershwin, with a musical theater background, where the music was already accepted--not only accepted, but popular--is a kind of threat."

The controversy over "Porgy and Bess" was not limited to music critics, according to historian Amy Henderson.

"He was criticized and savaged by leading black composers, like Duke Ellington. When "Porgy and Bess" came out, Duke Ellington said, `The times are here to debunk Gershwin's lamp black Negroisms,' by which he meant, `What is this white Jewish guy from New York trying to do caricaturing and stereotyping blacks that he sees in Charleston, South Carolina?'"

Ann Brown, the original Bess, says that even her father expressed disappointment when he first saw the opera.

"He believed that there had been too much of the stereotype of the black man as a gambler, fighting, killing and stabbing each other and that sort of thing. And he said, `I don't like it. I wish George Gershwin had chosen another theme to write his music.'"

"In most operas, there are a lot of very unpleasant people. Operas are not generally written about Goody Two-shoes. They're written about murderers, pimps, whores, spies, martyrs, and, incidentally, lovers. But you look at the great operas, and there are always villains in them. Now, unfortunately, in a piece that's all black, it becomes, therefore, whether we mean it to or not, black villains."

Singer Cynthia Haymon has played Bess opposite many Porgys.

"Isn't it ironic that it's one of the only roles that a black man has in an operatic repertoire, and he's on his knees the whole evening? There are all kinds of jazz notes. There are blues notes. I can't think of another score that's richer, that's got some of everything in it."

"Porgy and Bess" is now generally considered a master work of 20th century opera, and it's performed all over the world. But in 1935, it couldn't even stay open for a full Broadway season. After the opera briefly toured, Gershwin found himself in the unique position of having to look for work. He moved to Hollywood and wrote classic songs like "They Can't Take that Away from Me" and "Love Is Here to Stay" for the movies. He planned to move back to New York and continue writing music for the concert hall and opera house, but then, suddenly, he died of a brain tumor on July 11th, 1937, at the age of 38. From his first compositions to his last, George Gershwin was a true American original. The son of Russian immigrants, he soaked up all the sounds he heard, black jazz, Jewish music, Tin Pan Alley tunes, European concert works, and with his genius synthesized them into his own distinctive voice. Ann Brown recalls sitting next to the composer at one of the rehearsals of "Porgy and Bess."

"And I remember at one point that George Gershwin himself said, `You know, this music is so beautiful, I can hardly believe I've written it myself.'"