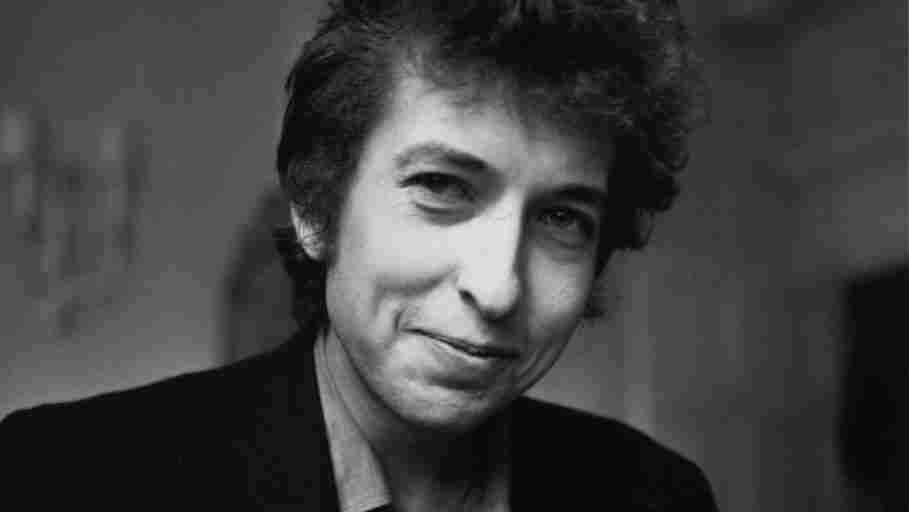 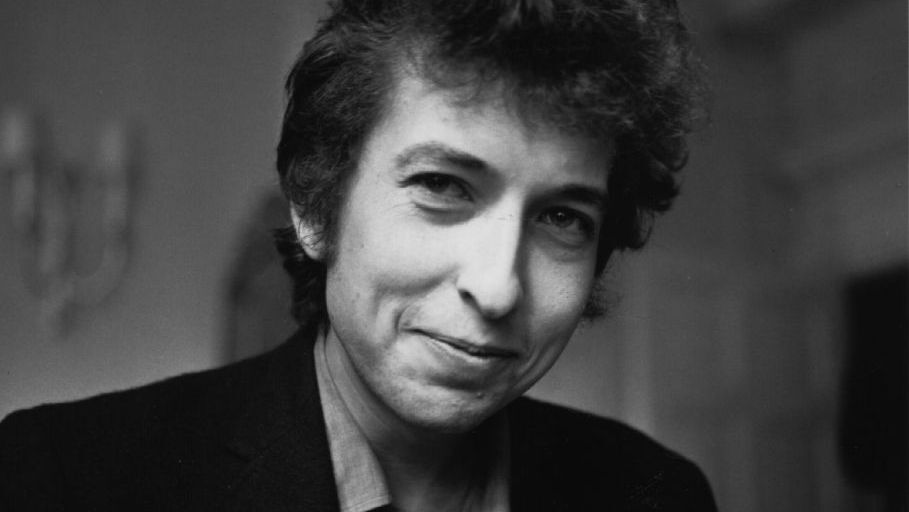 Bob Dylan smiles during a meeting with the British press, April 28, 1965.

Bob Dylan was awarded the Presidential Medal of Freedom by Barack Obama on April 26, 2012. The honor is due in no small part to songs like "Blowin' in the Wind" still asking the same hard questions 50 years later.

By 1962, Bob Dylan had been hanging around McDougal Street in Greenwich Village for a little more than a year. He was known as a nervous guy with a funny cap, a singer and writer of songs like dozens, maybe hundreds, of others. Happy Traum and Bob Cohen were members of a folk group playing the Village at that time, called The New World Singers. They would invite Dylan up on the stage to join them.

"He was very sort of rough around the edges," Happy Traum notes, "and at the same time he had built this mythology about himself where we didn't know where he came from; he just sort of appeared, hitchhiking or riding boxcars out of the Southwest or something like that. And so he was immediately this kind of iconic figure even for a 19- or 20-year-old kid."

Rough as he was, Dylan had caught the eyes and ears of some important and influential people. John Hammond, already a legendary producer at Columbia Records, heard Dylan and signed him for the label. His first album contained just one original composition, "Song to Woody," and sold only a few thousand copies. But Dylan continued to play and to learn. One night at Gerde's Folk City, Dylan heard The New World Singers perform a Civil War era freedom song, one that Bob Cohen still remembers.

"It was very dramatic and a very beautiful song, very expressive. And Dylan heard that and heard other songs we were singing. And some days later, he asked us, he said, `Hey, come downstairs.' We used to go down to Gerde's basement, which was--is it all right to say?--full of rats, I don't know, and other things. And he had his guitar, and it was kind of a thing where when he added a new song, he'd call us downstairs and we'd listen to it. And he had started--and he wrote, (singing) `How many roads must a man walk down before you can call him a man?' And the germ of that melody of "No More Auction Blocks" certainly was in that."

The New World Singers were the first to record "Blowin' in the Wind." Dylan later said he wrote the song in a cafe across the street from the Gaslight. He claimed it took him 10 minutes. Dylan's manager, Albert Grossman, gave a demo of the song to another act he managed, a trio named Peter, Paul & Mary.

"Blowin' in the Wind" quickly became an anthem of the civil rights movement then reaching its peak. Dylan sang it himself at a voter registration rally in Greenwood, Mississippi, in the spring of 1963. Peter, Paul & Mary performed it on the steps of the Lincoln Memorial in August of that year, a few hours before Martin Luther King delivered his `I have a dream' speech. And Peter Yarrow remembers singing it during the march from Selma to Montgomery.

"When we sang it, it was in a field where probably I'd say, oh, 5,000 of the poorest people I'd ever seen, all of them black. And they waited in the rain for a couple of hours 'cause the sound system had gone to the wrong destination. We sang it very slowly, very, very--in a very determined way, but with a sense of the weariness of the people that surrounded us."

"Blowin' in the Wind," with its references to cannonballs and white doves, was also adopted by the anti-war movement. Peter, Paul & Mary's version of the song became the fastest-selling single in Warner Brothers' history. It was topical, it was political and it was completely unlike anything else on the radio, which at the time was dominated by highly produced pop songs: Stevie Wonder's "Fingertips, Part 2," "Judy's Turn To Cry," by Lesley Gore, and The Four Seasons' "Candy Girl."

"I think it beat out the 'Chipmunk Song,' or it was right up there with the "Chipmunk Song" and "To Know Him Is to Love Him. And can you imagine what it was like to be a teen-ager and to be flipping through the dials and to hear that kind of silly pop and then the next thing, or the next song, is "Blowin' in the Wind"? What a revelation that must have been."

In fact, it's the most covered of any Dylan song, with everyone from Duke Ellington to Glen Campbell to Stevie Wonder having recorded it.

Greil Marcus has written about Dylan and the '60s. He says "Blowin' in the Wind" was a product of its era.

"You know, there are songs that are more written by their times than by any individual in that time, a song that the times seem to call for, a song that is just gonna be a perfect strike rolled right down the middle of the lane, and the lane has already been grooved for the strike. And this was that kind of song. Someone had to write this song."

But what does it mean, `The answer, my friend, is blowin' in the wind?' Dylan himself was cryptic about it, telling Sing Out! magazine in 1962, quote, "There ain't much I can say about this song, except the answer is blowin' in the wind. It ain't no book or movie or TV show or discussion group, man. It's in the wind." Writer David Hajdu says its ambivalence is part of the song's appeal.

"The song can be anything to anybody. It's critical and it's hard, this litany of questions about what's wrong with the world, OK; so if you're inclined, you know, to damn the establishment and the prevailing authority, there's your song. If you're of a more positive nature, well, this song provides an answer, too, or it hits--it leans toward an answer. `The answer, my friend, is blowin' in the wind.'"

Peter Yarrow, who, with Noel Stookey and Mary Travers, has probably sung the song more often than anyone else, says it's wrong to take the lyrics too literally.

"You can hear in this a yearning and a hope and a possibility and a sadness and sometimes a triumphal proclamation of determination. The answer is blowin' in the wind means we will find the answer. So it's a matter of interpretation and, frankly, I think Bobby was probably right and legitimate in not giving a specific interpretation."

Dylan's own version of the song appeared on his second album, the 'Freewheelin' Bob Dylan,' released in May 1963. What it lacks in polish it gains in authenticity."

Dylan himself has downplayed the significance of "Blowin' in the Wind." In the liner notes to his 1985 "Biograph" collection, he called it `just another song,' although he admits he knew it was special but not to what degree. It is still a staple at protest rallies and campfires, and it remains, in Peter Yarrow's words, "part of the secular liturgy of our times."