Accessibility links
'Stand By Your Man' In August 1968, Tammy Wynette and her producer Billy Sherrill recorded the song that would become her signature — a song that feminists pointed to as degrading to women.

Title: Stand By Your Man

Billy Sherrill, co-writer of Stand By Your Man

Jerry Kennedy, guitarist on Stand By Your Man

(DATs and logs are available from Anita Bugg)

Recordings Used: Stand By Your Man 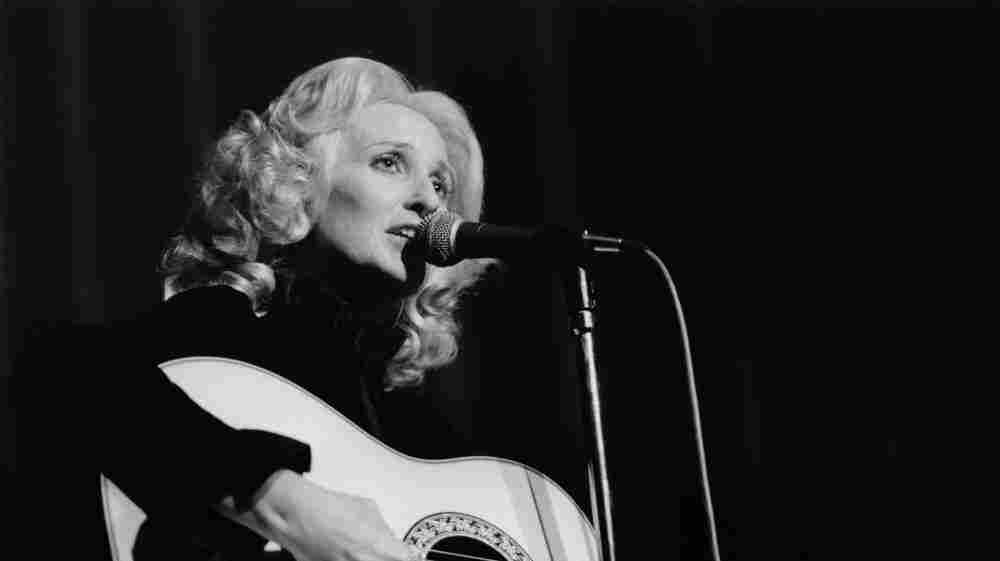 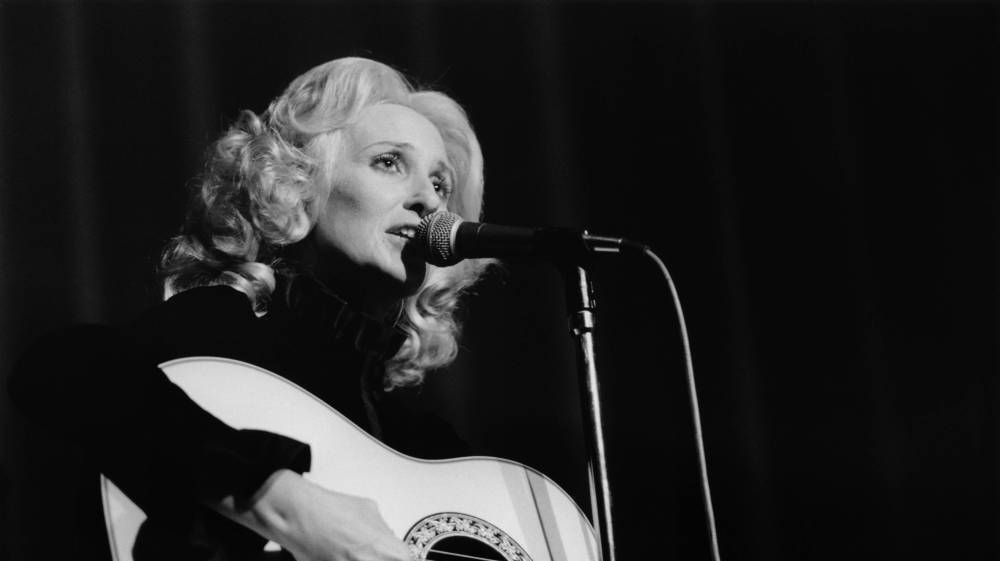 It's such a simple country song expressing an innocent sentiment: `If you love your man stand by him.' Who knew it would become a target for feminists and even an aspiring first lady. Tammy Wynette's friend and publicist Evelyn Shriver says Wynette never got tired of singing the song, but she did get tired of defending it.

"What she said is, `It's unbelievable to me that a song that took me 20 minutes to write, I've spent 20 or 30 years defending.'

Those 20 minutes came at a session in Nashville in August of 1968. Producer Billy Sherrill called in his A-team session players--bassist Bob Moore, drummer Buddy Harmon, guitarist Ray Eddinton, Pete Drake on steel and Hargus "Pig" Robbins on piano. With an hour left in the session, Sherrill recalls they'd cut a couple of mediocre songs, but he needed one more for Wynette's fifth album. In his pocket, he had an old crumpled-up piece of paper with lyrics on it. It was a song he wanted to call "I'll Stand By You, You Please Stand By Me." But Ben E. King already had a hit with "Stand By Me." Legend has it that as Billy Sherrill and Tammy Wynette climbed the stairs to his office over the studio to finish the song, a band member piped up with the suggestion, `How about "Stand By Your Man"?'

"So the musicians immediately started playing poker or whatever they do on breaks, and we went up and knocked it out in, you know, a few minutes.

Billy Sherrill grew up in Alabama, the son of a traveling Baptist minister. His first musical influence was the gospel music he heard at tent meetings with his dad. A lover of all genres from bluegrass to Bach, Sherrill's lavish Nashville arrangements were dubbed country-politan. And it wasn't just his arrangements that made his records different. His dynamics were the most difficult in Nashville. Billy Sherrill compares recording producing to movie making, trying to drag out the emotions.

That day in 1968, as he usually did, Sherrill played the song on the piano so the guys in the band and the background vocalists, The Jordanaires, could learn it. He showed them the chord progressions and when to be loud and when to be soft, a critical element. Bill Sherrill wanted an intimate sound, so he had the band and The Jordanaires next to Wynette in the studio. They practiced the song a few times and recorded no more than three or four takes. Amazingly, her voice comes through front and center.

But Billy Sherrill wasn't satisfied. He hated the song's original steel guitar opening. He turned to guitarist Jerry Kennedy, who had gotten stuck in Chicago and missed the original session. That Saturday, when Kennedy arrived in Nashville, Bill Sherrill asked if he could play an opening riff similar to the one on "Your Good Girl's Gonna Go Bad."

Sherrill told Kennedy that he didn't want, quote, "another damn steel intro." Jerry Kennedy pulled his cold guitar out of its case.

"And I can't remember whether I was tuning my guitar, but, you know, the thing turned out `dah-nah-nah-nah, dah-ah,' which are some things you do when you're tuning. So that's how the intro ended up being what it was. And then I played the harmony part for the little lead-up into the chorus. And I did those things and left. I was out of there in 15 or 20 minutes."

Kennedy says he knew "Stand By Your Man" was a hit. Billy Sherrill says he did, too, much to Tammy Wynette's dismay.

"And I remember after the first take, she said, `God, if this is a hit, you know what?' I said, `What?' She said, `I'm going to have to hit that God-awful high note the rest of my life.'"

Wynette thought she sounded like a squealing pig. In an interview with Ralph Emory of The Nashville Network in 1994, Wynette says she begged Billy Sherrill not to release the song.

"Well, it was totally different from the other things that I had done, the kid-type songs, "D-I-V-O-R-C-E" and "I Don't Want To Play House" and those type things. And to me, it did not have a pretty melody. I didn't like it. I hated the high notes that I had to hit. I mean, I just didn't like it. And I told Billy, I said--well, I didn't have confidence in my writing either, because I had never written with Billy Sherrill before. And he was a wonderful writer, and I knew that. He'd written "Almost Persuaded" and some great songs. So I didn't know--I just wasn't, you know, confident at all."

But Billy Sherrill was. He knew her voice was special.

"Just husky and soulful and tearful and dynamic and up and down. You know, everybody thought she had a big range. She didn't have a big range, she was just loud and soft. And she lived it, you know. She lived every tear everybody ever heard her sing.

The tearful sound in her voice came naturally. Virginia Wynette Pew's father died just after she was born on the Mississippi-Alabama state line in 1942. Her maternal grandparents raised her after her mother moved to Memphis for work. Wynette got married when she was still in high school. By the time she was 22, she had three daughters. When her first husband couldn't make ends meet, she moved to Birmingham, Alabama. There, she got a beautician's license, which she would keep until her death. She'd rise early in the morning to perform on the "Country Boy Eddie" TV show and then go style hair all day. But in 1966, she put the girls in the car and headed to Nashville, knocking on every record label door until she walked into Billy Sherrill's office.

"She didn't have any clothes, you know, and her hair wasn't done right, and she was scared to death and everybody in Nashville had turned her down. She had a kind of beaten type of appearance, you know, just like, `OK, you know, I've been kicked in the teeth so many times, one more time's not going to kill me,' that type thing. But we changed all that."

He changed her name to Tammy and, after she started turning out hits, gave her the title `first lady of country music.'

Epic Records released "Stand By Your Man" in October 1968, just as the women's liberation movement was gaining notoriety. In fact, Billy Sherrill says the record company took advantage of it.

"There was a full-page ad in the Billboard magazine taken out by Epic Records--some kid thought of it up there--`Tammy Wynette's Answer to Women's Lib, "Stand By Your Man," New Release.'"

It hit number one on the Billboard country charts five weeks later and crossed over, becoming a top 20 pop hit. The backlash was swift and unforgiving. A Newsweek article called it a song, quote, "for the beleaguered housewife who grits her teeth as destiny dumps its slop on her head." And fellow singer Jeannie C. Riley of "Harper Valley PTA" fame said, quote, "It sounds like you should take anything he dishes out." Ironically, Wynette, while recording the song, was preparing to divorce her second husband for George Jones, another turbulent marriage she would eventually leave. Evelyn Shriver says Wynette defended the song, calling it a reflection of her background.

"She said, `The women I knew--my mother, my grandmother, my aunts--they stood by their man.' And she said, `Nowhere does it say be a doormat and let this man walk on you.'"

She certainly didn't. She married five times, and each time she was the one to leave if she was no longer in love. Her fifth marriage to songwriter George Ritchie lasted more than 20 years. By that time, the ruckus over the song had died down, or so she thought. Then came the presidential election of 1992. During an interview on "60 Minutes" about her husband's alleged affair with Gennifer Flowers, Hillary Clinton proclaimed she wasn't `some little woman standing by her man like Tammy Wynette.' Watching it from her bedroom in Nashville, Wynette exploded.

"I came up out of the bed. I said, `It didn't make me so mad about the song right then, it made me made 'cause she said "some little old woman."'"

In the end, Evelyn Shriver says the song won the battle.

Tammy Wynette's final years were spent in as much pain as her voice implied in her songs. An appendectomy in the early 1970s started it all, then came a hysterectomy, gallbladder surgery and dozens of other surgeries to remove adhesions. Remarkably, she performed until her death of a blood clot in the lungs in 1998. She was 55. Regarding her tough life, Wynette once told an interviewer, `The sad part about happy endings is there's nothing to write about.'