Accessibility links
Bernard Herrmann's Score to 'Psycho' Herrmann and Hitchcock collaborated on many other films, but Psycho is seen as the epitome of their collaboration and the definitive sound of horror music.

Also used clips from the movie Psycho – the shower scene with and without music. Available on the DVD version of the movie. 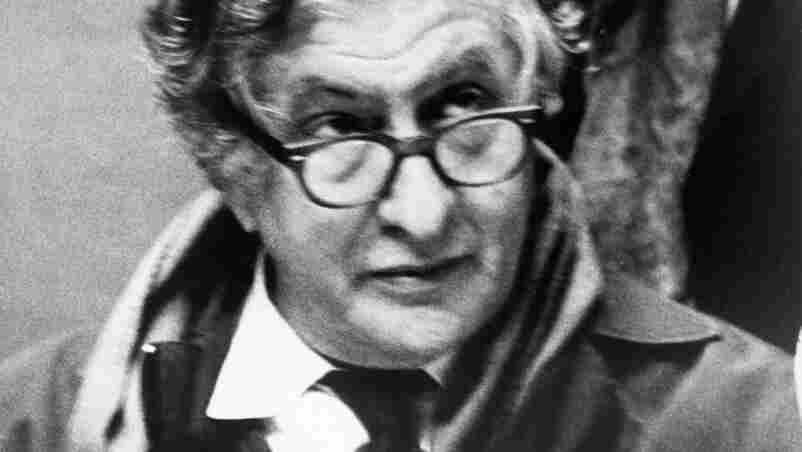 Before his collaboration with Hitchcock, Bernard Herrmann had written several scores for radio and film. He worked with Orson Welles in the Mercury Theatre; he wrote the music for "The War of the Worlds" and, later, "Citizen Kane." Herrmann's music was also heard on dozens of television programs, including "The Twilight Zone." He died in 1975, just after completing the score to "Taxi Driver." But perhaps his most enduring and best-known work was done with Alfred Hitchcock, and Bernard Herrmann's score for "Psycho" has come to epitomize suspense and terror.

When "Psycho" first played in movie theaters, the film's horror was matched by its hype. No one would be seated after the film began. So with some trepidation, audiences 40 years ago watched the opening credits of "Psycho" and they heard something unnerving: a string ensemble striking a chilling chord composed by Bernard Herrmann. Film professor Royal Brown calls it the Hitchcock chord.

:That bump-bump-bump-bump sort of signals the whole presence of "Psycho." And it's a 7th chord that contains both major and minor intervals. And that, to me, is one of the essences of Hitchcock, which, of course, Hitchcock tends to start out in the ordinary. For instance, the opening scene of "Psycho" looks like just an ordinary tryst in a hotel room between Janet Leigh and John Gavin. So there's the major, but then there's also the minor, which is getting us into the darker side of things."

The marriage of Alfred Hitchcock's movie and Bernard, or Benny, Herrmann's music is seen as a perfect union, the peak of the collaboration between the English-born director who moved to Hollywood and the composer from New York City who lived his later years in Britain.

"In the mid '50s, he started working with Alfred Hitchcock on films like "The Trouble With Harry," "The Man Who Knew Too Much," "Vertigo," "North By Northwest," and all of those films came before "Psycho." So by 1960, when "Psycho" was released, the partnership between Alfred Hitchcock and Bernard Herrmann was very, very close. Hitchcock is famous for having planned every detail of his movies to the smallest one, but it was interesting to discover that he actually left the area of music very, very open to Bernard Herrmann. Hitchcock knew that he had someone who thought very closely along the same lines as he did, who understood not only what a movie was about, but about the subtext of the film."

"Hitchcock was doing something different. He was doing what was, for him, a low-budget film. And everything in the budget got cut back, including apparently the music budget. So Herrmann was working with a little less. He got his fee, but he didn't quite have the resources that he usually had. And 'Psycho,' of course, is a black-and-white movie. And Benny later said that he wanted to complement the black-and-white photography with a black-and-white score. Well, just as there's tremendous range in black-and-white movies in the photography of them, Herrmann found tremendous range within this limited group of instruments, the string section. He made the strings extremely dry. He put mutes; he loved to have mutes on his strings."

"So it creates a very different sound from what we think of as the usual Hollywood romantic film score that used violins. It's the exact opposite. It's cold, it's chilly, and he uses the strings also for percussive effects, since we don't have the traditional things like timpani and all the sort of devices that film composers use to scare or startle people. He created percussive effects in the strings."

"Psycho" was a black-and-white film made at a time when Hitchcock typically worked in color and when moviegoers typically expected color. As film critic Leonard Maltin says, `This was a film that defied all sorts of expectations.'

"There had never been a film, certainly not from a Hollywood filmmaker or a Hollywood studio, like "Psycho." It was exponentially a hundred times more shocking than it is today. Imagine the unthinkable, killing off a major star in the first portion of the film. No one had ever done that; few have done it since. It's outlandish, it's outrageous. It's, of course, brilliant. So to be sitting in that theater in 1960 and hear the sudden shriek of violins as Anthony Perkins pulls that shower curtain and to witness what happens from that point on, I think people must have been thinking, `Am I really seeing what I'm seeing here? Is Janet Leigh dead? Janet Leigh can't be dead, she's the star of the movie.' It was devastating."

The murder of Marion, Janet Leigh's character, is the most famous and terrifying moment in "Psycho," some would say in all of Hitchcock's films, if not in all cinema. Remarkably, Hitchcock at first didn't want the scene to have music at all.

"He thought that it would be most effective if the audience simply heard Janet Leigh's screams, her struggling, the sounds of the knife and then the water running," Steven Smith says. "+His collaboration with Herrmann was so close, however, that Benny knew, `Well, I have a different idea,' and he wanted to try writing music for that. And he knew that if Hitchcock didn't like it, they didn't have to use it. But Benny went ahead and wrote what has become, I think, the most famous hue in the history of film music for the shower scene. And I think one of the proudest moments of his career as a film composer was when Hitchcock later told him that he, Hitchcock, was disappointed with the way the shower scene was playing; that it did need music. And Benny later said that he told Hitchcock, `Well, I did compose something. Would you like to hear it?' And he played it for Hitchcock, and Hitch said, `Well, absolutely, we'll use that.' And Benny, rubbing it in, said, `But you said no music,' to which Hitchcock replied, `Improper suggestion, my boy. Improper suggestion.'"

"It's interesting to watch that sequence without the music, because it's still a very disturbing sequence, but you're watching it as an outsider. You're watching a terrible thing happen, but you're watching it from the viewpoint of someone outside of it. With Herrmann's cue, you are Janet Leigh. You are feeling the absolute terror and panic and loss of control that she is feeling in trying to fend off this sudden attacker. And that was the thing that Herrmann did again and again, especially in Hitchcock's films, was that he forced the viewer to feel what the characters on screen were feeling. He considered film music, in his phrase, the `communicating link' between the filmmaker and the viewer."

Unlike many composers, Bernard Herrmann got to see Hitchcock's film and write to it scene by scene, which isn't to say that every piece of Herrmann's score came to him as he watched Hitchcock's otherwise finished product. Professor Royal Brown says some pieces in "Psycho" were written by Herrmann more than 25 years earlier.

"I interviewed Herrmann very shortly before he died and insisted to me that he always depended upon the film to be inspired for the music. And yet there's a major cue called "The Swamp" in "Psycho" that is taken out of a 1933 symphonetta for strings that Herrmann wrote. And there are several other points in the "Psycho" score that also come from this. So my impression is that Herrmann was exploring very deep, dark, gloomy areas a long time before he met Hitchcock."

Bernard Herrmann's score for "Psycho" was not even nominated for an Academy Award, and his collaboration with Hitchcock, so fertile in the 1950s, crashed on the unhappy shores of the '60s. Movie scores were turning to jazz, pop and rock music and striving to include a hit tune. Herrmann's orchestral scoring of Hitchcock's film "Torn Curtain" struck the studio as antiquated. It was rejected and replaced. But Herrmann's work gained greater recognition years later. And imitation being the sincerest form of movie music, his inventive use of strings became a cliche for cinematic horror. Also, his music inspired younger film composers.

"It was growing up on Herrmann that gave me the love of film music that allowed me to become a composer. He's always been my model and my idol," says film composer Danny Elfman, who has scored director Tim Burton's movies. He says Herrmann was able to communicate perfectly with Hitchcock, even though the music is typically the hardest aspect of a movie for a filmmaker to relate to.

"It's the one thing they can't control. They're going to see a picture of all their costumes. They're going to see pictures of all their production design and approve them and be able to make intelligent, theoretically intelligent comments about what they like and don't like about this costume; what they don't like about this set; what they don't like about the way the cinematographer's setting up a shot; the way they don't like the cameras moving. But when it comes to the music, they can't. All they can go is, `I don't know what it is, but it's not getting to me,' or `Something is bothering me here.' And the composer has to interpret what it is, because they don't have any ability to tell you what it is. They often don't even know. It's an abstract form to them. And so it can be a much more abstract and frustrating experience for a director."

"I think when a director finds a composer and-or even production designer or cinematographer or whatever who understands them, who can get inside their head, who can second-guess them correctly, they're just going to want to stick with that person. There's a level of comfort. And "Psycho," it was just one of these absolute instant connections of perfect union of music and image, and Hitchcock at his best, and Bernard Herrmann at his best."