Accessibility links
'Great Balls Of Fire' There was something about this song that was unsettling; Little Richard was fun, Elvis was cool, but Jerry Lee Lewis was frightening.

As performed by Jerry Lee Lewis 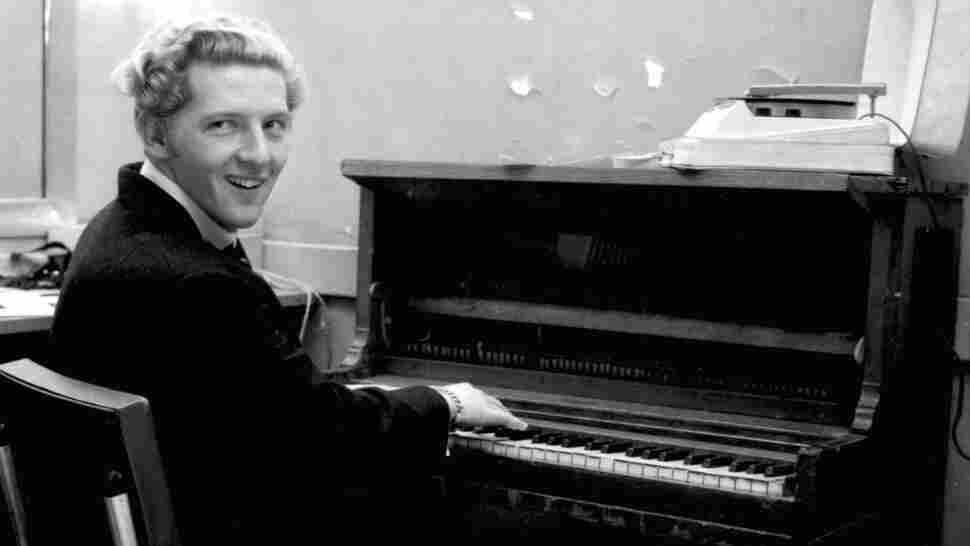 Jerry Lee Lewis smiles over his shoulder while playing the piano in a dressing room. Getty Images/Getty Images hide caption 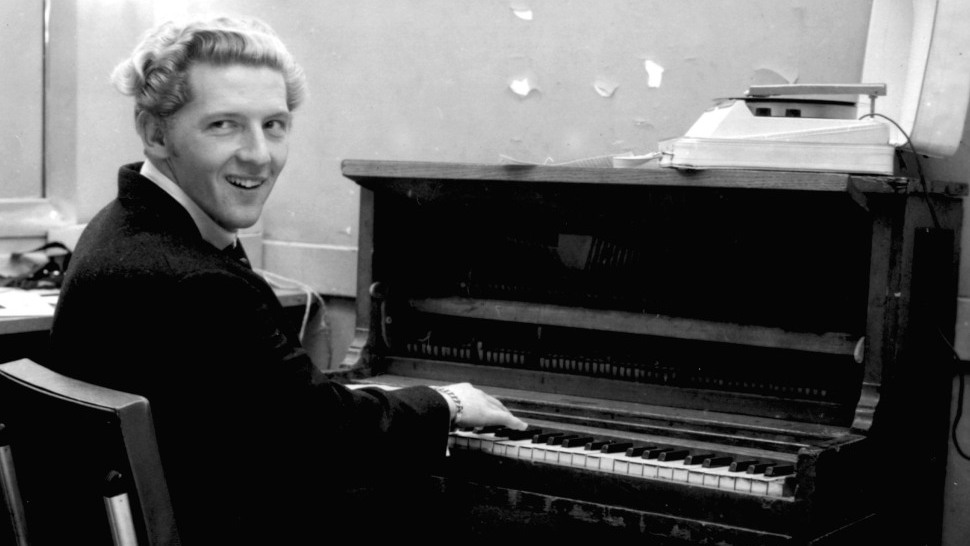 Jerry Lee Lewis smiles over his shoulder while playing the piano in a dressing room.

I can remember barreling down the road standing in the back seat of my sister's '56 Chevy Bel-Air, two-door, when I first heard "Great Balls of Fire." It exploded out of the speakers in her dash with a ferocity and a power that scared me a little. I was almost seven and no stranger to the new music that was sweeping the nation, rock 'n' roll. But there was something about this new song, "Great Balls of Fire," that was unsettling. Little Richard was fun; Elvis was cool, but Jerry Lee Lewis was frightening. I wanted to be Little Richard; I did not want to be Jerry Lee Lewis."

Elvis had drawn a musical line between the generations a year earlier with his boyish looks and a million-dollar grin, but Jerry Lee looked like a used Bible salesman with a leer that would have made Jack the Ripper smile. Jerry Lee gave us unashamed angst and unparalleled passion. It was the church of the holy roller brought straight to the altar of sex.

Jerry Lee Lewis was born in the fall of 1935 in Ferriday, Louisiana, to a musical family with a split personality, the saint and the sinner, the divine and the delinquent. He would hang out with his rowdy, white-trash cousins, listening to black honky-tonk music, but his mother was a Pentecostal preacher and did not approve. While still in his teens, Lewis was thrown out of the Southwest Bible Institute for playing rhythm and blues on a school piano and he was beginning to feel caught between heaven and hell. Then, as now, he felt the powerful pull of what his cousin, evangelist Jimmy Swaggart, called `the devil's music.'

Sam Phillips discovered Lewis playing at a club in Natchez, Mississippi, in 1956. Phillips convinced him to come to Memphis as a session musician and Jerry Lee lent his blistering piano to a number of hit recordings for Sun Records as a sideman before he struck pay dirt in the spring of 1957 with his classic version of "Whole Lotta Shakin' Going On."

With Lewis' record a top 10 hit, Phillips was looking for another vehicle to showcase the singer's unique energy. Otis Blackwell, author of Elvis' big hits "Don't be Cruel," and "All Shook Up," had seen Lewis perform "Whole Lotta Shakin'" on "The Steve Allen Show," earlier that year, so he sent Sam Phillips what he felt was a sure hit for this fiery young piano player. But Lewis wasn't so sure.

Jerry Lee was full of conflicted rage. Fearing that rock 'n' roll was leading him down the path to hell, he argued that the temptations of the flesh represented by this song and the spiritual ascension necessary to be a true Christian could not be reconciled. Perhaps he didn't exactly use those terms.

Although it got to number one on the R&B charts, "Great Balls of Fire" never made it to number one on the pop charts. It entered the top 40 in December of 1957 and stalled at number two, first behind Pat Boone's "April Love," and then Danny and the Juniors' smash hit, "At The Hop." It's easy to dismiss a lot of early rock 'n' roll songs like "At The Hop" and "April Love" as harmless, showbiz fluff, but there was nothing showbiz or fluffy about "Great Balls of Fire." This was real conflict, real emotion, real soul-searching.

By now we've seen it all. Movies leave no gory detail unshown; singers leave no word unsaid. It's hard to imagine a time when rock 'n' roll could truly be scary, but it was. Rap and hip-hop pose an interesting and not altogether dissimilar parallel today, with some parents, as they did in the '50s, fearing the influence of these scary, unknown anarchists on their impressionable children. But most of these acts are corporate posers. Jerry Lee wasn't. He was the original loose cannon. I don't know about you, but I still use Jerry Lee Lewis' name to invoke the three-headed demon of sex, drugs and rock 'n' roll, and his performance on "Great Balls of Fire," a song recorded more than 40 years ago, is still the standard by which I judge all other rock 'n' roll piano players.