Accessibility links
'Guys and Dolls' This was Broadway's first and best show about Broadway — not its glamor, but its dark underbelly. 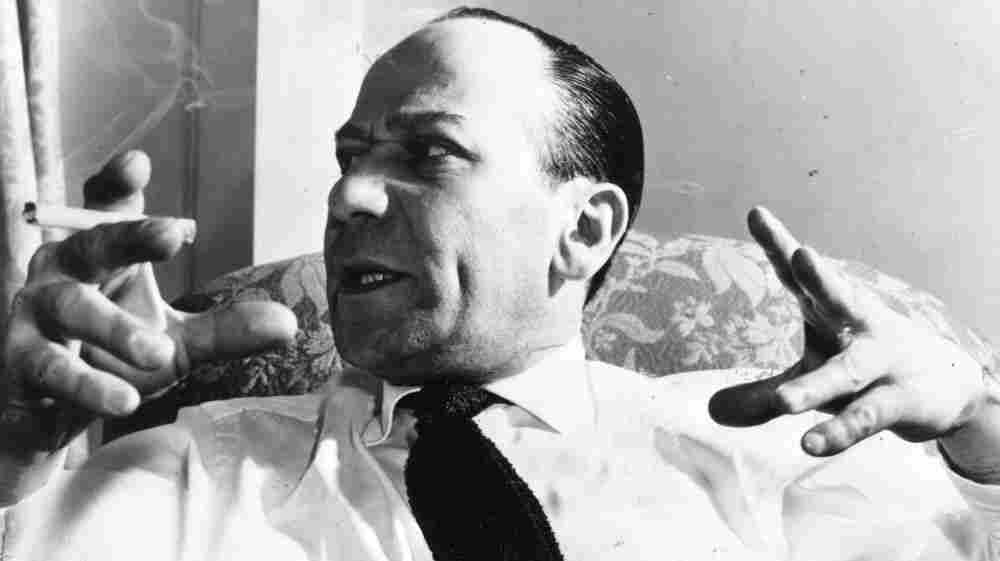 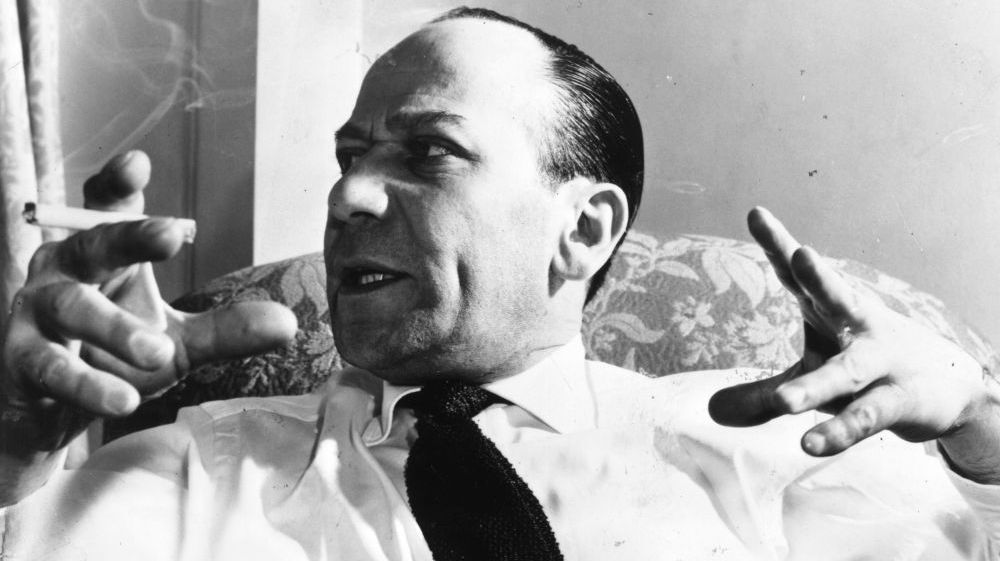 When Frank Loesser's musical "Guys and Dolls" opened at the 46th Street Theatre 50 years ago this weekend, it was Broadway's first and best musical about Broadway--not the neon thicket of bright lights and blooming marquees, but Broadway's more garish undergrowth, Damon Runyon's world of gamblers, touts and showgirls itching and straining to roll sevens and 11s in the great crapshoot they call life.

The musical was not as innovative as "Oklahoma!," which opened in 1943, or as socially conscious as 1949's "South Pacific," but "Guys and Dolls" was a brassy, daring and unrelenting entertainment, a show that could be rough, sultry, subtle and vulgar; would-be saints and aspiring sinners all singing common notes. The world had just ended one war in 1950 and often seemed on the verge of another. Hadn't we learned that `being good' sometimes isn't as good as just being lucky?

Fred Ebb, who would one day help compose sharp, pointed, mold-breaking musicals, including "Cabaret" and "Chicago," saw "Guys and Dolls" when he was 11 years old.

"Guys and Dolls" was taken from the works of Damon Runyon and the New York he created in short stories and newspaper columns, a Times Square tawdry and alive with hustlers, squares, pigeons, rusty hearts, easy marks and molls with hearts of gold. When Broadway producer Cy Feuer telephoned composer and lyricist Frank Loesser, he opened with a single word, as Mr. Loesser recalled it.

Frank Loesser had just turned 30. Although born in New York, he'd become a Hollywood composer and had spent World War II writing for Army camp shows, which produced one sterling hit: "Praise the Lord and Pass the Ammunition." Cy Feuer and his partner, Ernie Martin, reasoned that a man who'd managed to fit God and gunpowder into the same lyrical breath could make a musical out of the idiosyncrasies of Damon Runyon's loveable lowlifes: Harry the Horse, Nicely Nicely, Nathan Detroit and Big Jule from Chicago. Cy Feuer, who's now 89, told us that he and his partner had told Frank Loesser it might take a year to craft a script from which Mr. Loesser could then compose songs."

"And he said, `OK,' but then he couldn't resist it and he started writing. We heard the material, and it just made us more enthusiastic than ever, except we had no story. And when we finally got a story, it had nothing to do with horse racing. It had to do with crapshooting. And to this day, no one has ever said to us, `Why do you open the show about horse players and then never see them again, and switch over to crapshooters?' It was an unreal real show. That's what made it different. So unreal show based upon tough reality."

Isabel Bigley, an American actress working in London, was cast as Sarah. She is the last surviving member of the original Broadway cast.

"There had been musicals before, but they were always pretty girls and pretty boys, and you knew when a song was comingup. And I think with 'Guys and Dolls,' this had gags in it, it had bad guys and good guys, and everything just blended. I mean, you went into a song and it was part of the script. It wasn't `We'll stop and now we'll sing a song.'"

The producers particularly wanted to work in Runyon's character of Nathan Detroit, a gambler who was essentially a producer of roving crap games. The thousand dollars Nathan has to raise to stage a dice game for Big Jule from Chicago reminded the producers of the sums they had to raise to put on shows. Cy Feuer and his partners had wanted an old Yiddish theater vaudevillian named Sam Levene for the role. He'd played Runyonesque characters before with the requisite New York rasp, swagger and stage smarts. Nathan Detroit may have been the role that Sam Levene had been born to play—except he was tone deaf.

Sam Levene had this recollection for a benefit program in 1959.

"The entire thing was sung out of tune," Mr. Feuer remembers. "He never, ever sang it in tune. And it was absolutely right for the character Nathan."

In the 1992 revival of the show, Nathan Lane, who, by the way, took his stage name from the character of Nathan Detroit, showed that the song can also expand for a real singer.

Nathan Detroit has been engaged for 14 years to Adelaide, a dancer at the Hot Box Club. She devoutly believes that her prolonged bachelor status has given her an uncommon cold.

Vivian Blaine, one of Broadway's ranking blonde molls, had wanted to
play the lead, Sarah Brown, but producers didn't know if her mature va-va-voom
would fit into a Salvation Army suit.

"They said they couldn't quite see me as the mission doll," Vivian Blaine remembered in 1959 when Frank Loesser had phoned to say he'd put a new character into the show. "'There's now a woman who is in her 40s by the name of Miss Adelaide.' And I said, `Well, thanks a lot, Sam, that's a big help.' He said, `Well, listen to this.'"

"Here's a girl who's got a cold all through the play and she says she has a cold 'cause somebody isn't going to marry her. That's a very rich comic notion. And she's got these hilarious punch lines. You know, if she's getting a kind of name for herself and the name ain't his; if she's tired of gettin' the fish eye from the hotel clerk. Every line in it is worth something. It means something; has impact. It has vitality. It has humor and charm and appropriateness. And I don't know how you can get much better than that."

But when "Guys and Dolls" opened its tryout run in Philadelphia in the fall of 1950, every performance led to fresh changes. Robert Alda, who played Sky Masterson, recalled.

"Forty of the 41 shows were completely different. In other words, we continuously were making changes. You'd think we had the world's worst flop on our hands."

There was at least one ugly moment. The producers had wanted a Sarah Brown whose voice could be lyrical and larklike amid the snarl of mid-Manhattan, but Frank Loesser thought Isabel Bigley's pure bell of a voice struck the wrong note. Fifty years later, Isabel Bigley remembers a wounding afternoon.

"We were doing a song and Frank didn't want me to sing it. And it had a very different range, and I said, `Well, why did you hire a singer if you don't want me to sing it?' And he said, `I want you to speak it.' And he started hollering, and I got very nervous and I giggled. And he hauled off and slapped me. And I think he was as stunned as I was. And I just continued on with the song like it had never happened. From that moment on, everyone was my pal because they thought it was so terrible. And his wife at the time, Lynne, did send me a dozen red roses. But Frank never apologized. You know, we all understood. There was tension; we were going to open in a couple of days and everybody was under tremendous pressure. We were working almost 24 hours a day."

"One night about 1:00 in the morning, Frank called me and said, `Get dressed, get down to my suite.' And I met with him and Cy Feuer. And he said, `We're going to try the song. Do it in front of the curtain, and you have to pretend you're drunk.' And we worked on it till about 5:00 in the morning. And they said, `OK, we're going to put it in on the matinee.' And I looked at them like they were crazy. And they said, `Well, we'll know if it's going to work. And if it works, then we'll work on it.' And, `Go home, get a couple hours of rest, and we'll see you at the theater.' We put it in the matinee, got a standing ovation and we never changed a thing."

'Guys and Dolls' would win all the major Tony awards in 1951. Remarkably, the show would again win for best musical when Jerry Zacks revived it in 1992. But only Vivian Blaine as Adelaide was asked to star in the 1955 movie version of the show. Marlon Brando was cast as Sky Masterson. He sang a demanding vocal role in a kind of tuneless whisper.

While Frank Sinatra, who had one of the great pop voices of all time, played the Nathan Detroit role that Sam Levene had made voice-proof. Isabel Bigley would retire from show business happily within just a few years. Robert Alda and Sam Levene continued as busy as productive actors, but never again had roles to match those of Sky and Nathan. Cy Feuer, incredibly, continues to produce Broadway shows at the age of 89. Frank Loesser went on to write another musical landmark, "How to Succeed in Business Without Really Trying," but he was just 50 when he died from a heart attack in 1969.

Today, it is irresistible to see at least a few glints of "Guys and Dolls" in the stagecraft of "West Side Story," the setting and theme of "Sweet Charity" and in the syntax of the musical "Chicago." Director Jerry Zacks comments on this.

"There's now question that we'll be seeing productions of "Guys and Dolls" in 50 years, and hopefully beyond that, because it is a timeless--you know, even though it's about gamblers and their dolls and their dames and the inhabitants of Times Square, the fact is, for me, the love stories in that show and the brilliance of the music--I use the word `joy' a lot, but that's what I think the show is all about, a kind of infectious joy that makes you just want to join them up there on stage. I don't think that's ever going to grow old-fashioned or out of date."

Over the years, one song has probably become "Guys and Dolls'" signature. Sky Masterson discovers that the woman whose affections he wanted to win on a bet has won his love with her sheer goodness. He makes one last roll of his dice to deliver his fellow gamblers to Sister Sarah's mission and to save his own soul. Robert Alda was the first man to sing.

Choreographer Michael Kidd staged a ballet beneath the streets and sewer pipes, all lunging pinstripes; strutting, flared slacks and fluttering bankrolls. The song captures the keen sensation that gamblers and young lovers, guys and dolls, all share: the nerve to shake up their lives and bet all on a feeling.