Accessibility links
'I Wanna Be Sedated' An appreciation of The Ramones' characteristically short, fast and loud punk-rock classic.

Listen
'I Wanna Be Sedated'

Title: I Wanna Be Sedated

Performed by The Ramones

Recordings Used: I Wanna Be Sedated 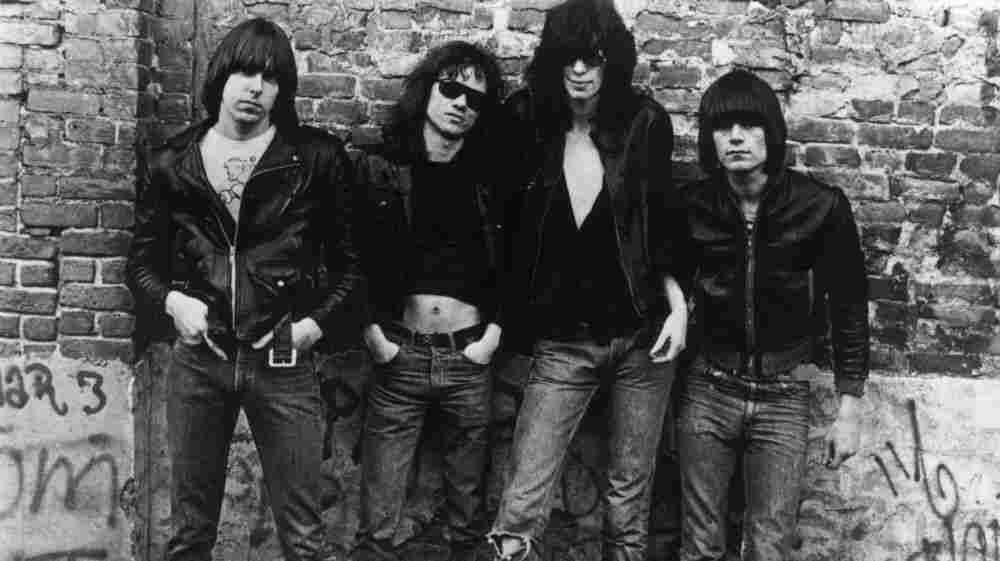 The Ramones' song "I Wanna Be Sedated" was released in 1978, four years after the band formed in Queens, N.Y. NPR's Bob Boilen has this appreciation, written for All Things Considered.

I can hear people stomping over to their keyboards now. "Dear All Things Considered, what are you doing? How can you even think of this bratty four-chord band as music?"

I love The Ramones. I think The Ramones took rock 'n' roll back to its soul. In the mid-'70s, rock had grown into something big, fat, bloated. Bands like Emerson, Lake & Palmer, Yes and Kansas were touring huge arenas. Large truck convoys followed them, filled with light towers and smoke machines and other things that had little to do with music. Sometimes, I think the critical success of Sgt. Pepper in 1967 and the cultural impact of Woodstock two years later were both a blessing and a curse for rock 'n' roll. Big productions and new instrumentation may have given rock legitimacy, but in the process, they took away its intimacy and immediacy.

Along came Joey, Johnny, Tommy and Dee Dee, four guys from Queens with a passion for short, loud and fast songs with great hooks. They altered their first names, and each took on a new last name: Ramone. It was Paul McCartney's stage name during the Silver Beatle days.

On July 4, 1976, America's 200th birthday, The Ramones went to the Motherland. The group's performance at the Roundhouse in London jump-started the punk movement. It was The Ramones' way of thanking England and The Beatles for rescuing rock 'n' roll from the Bobby Rydells, Bobby Vintons, Bobby Darins and Bobby Vees who were making a mockery of it, subverting the spirit championed by young Elvis Presley and Chuck Berry and Little Richard.

Bands like The Sex Pistols and The Clash were just getting revved up. The Ramones' music was a call to brandish guitars, shift music back to the clubs and sing from the heart and the gut. And don't forget: This is supposed to be fun.

I was working in a record warehouse in those days, pushing pallets full of Elton John, Bee Gees and K.C. and the Sunshine Band LPs. It was depressing. Along came The Ramones' first LP — 14 songs in less than 30 minutes — and rock 'n' roll was back to stay.

A new wave of bands came along that seemed to say, "You can do it. It's okay to be spontaneous. It's okay to take risks." I certainly got the message. Not long after, I would quit my job, sell my car, buy a synthesizer and join a band. I wasn't a virtuoso — no Keith Emerson — but I did it. So did Johnny and Joey, Tommy and Dee Dee and all the Ramones-to-be. Thanks, guys.

The Ramones' 1978 song "I Wanna Be Sedated" was voted onto the NPR 100. I'm not sure it was the best choice. "Sheena Is a Punk Rocker" was more emblematic of the band's music. But perhaps which song made the list doesn't matter. What's remarkable is that The Ramones wound up as the only electric guitar, bass and drum quartet on the NPR 100. "I Wanna Be Sedated" is from the group's fourth LP, Road to Ruin. By then, the original lineup was changing, but The Ramones' vision never changed: Make fast, loud, fun music. No solos. Keep it short. Play to your audience, not to each other.

And "I Wanna Be Sedated" is a funny look at life on the rock 'n' roll road. Its inspiration: Joey Ramone's accidental encounter with an exploding humidifier. He wouldn't go to the burn center till after he finished his New York performance. "I Wanna Be Sedated" was another attempt by The Ramones to write a hit single, an obsession for the band. But in the pre-Prozac days of 1978, what radio station was going to play a song with the word "sedated" in the title? But that was The Ramones, blissfully caught up in a self-made world of leather jackets, Phil Spector hooks and postmodern humor. They could hardly get on the radio, but they did succeed in changing it.