As recorded by Buddy Holly

Recordings Used: "I've Got a Soft Place in My Heart for You" by Buddy & Bob

"Peggy Sue" by Buddy Holly and the Crickets 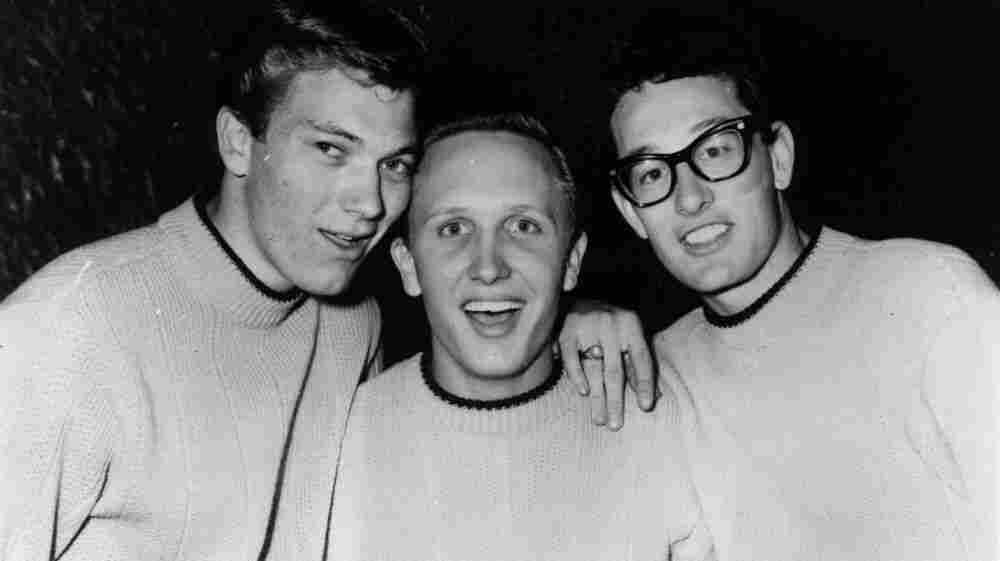 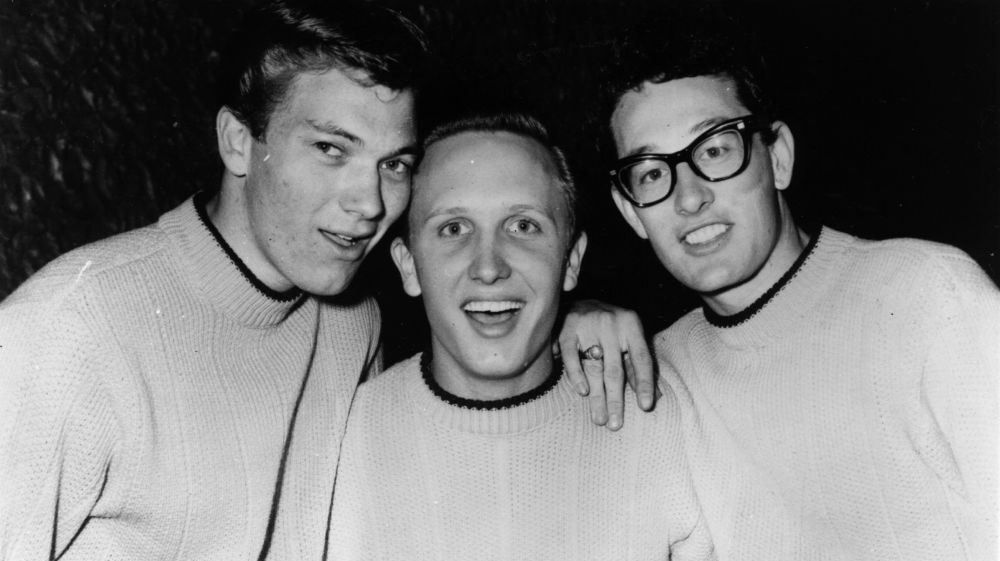 Buddy Holly, right, with his group The Crickets, Jerry Allison and Joe Mauldin.

Buddy Holly was a skinny kid with glasses, but in his short lifetime, he became one of rock 'n' roll's founding fathers. Holly, who was known for his Stratocaster guitar and trademark hiccup style of singing, influenced everyone from The Beatles to Bob Dylan. As part of the NPR 100, a list of the most important American musical works of the 20th century, WCPN's David C. Barnett has the story of one of Holly's biggest hits, "Peggy Sue."

"We used to go to the skating rink and watch him perform," Sullivan says. "Or if he were performing in a live show, say at an opening of a car dealership and things like that, that's how we were getting hooked into music. Because all we had to listen to in those days was the big-band music and, being in west Texas, mostly country and western."

Charles Hardin "Buddy" Holly got his start in the music business singing country and western songs. A Decca Records talent scout caught his act at the skating rink one day and signed him to a limited recording contract.

In a Nashville studio, Holly was given three chances to sell record executives on his music. But they weren't too crazy about his blend of rockabilly tunes with more traditional country ballads. Holly had especially high hopes for a song that he and his drummer pal Jerry Allison had written based on a line from the 1956 John Wayne film The Searchers: "That'll Be the Day." 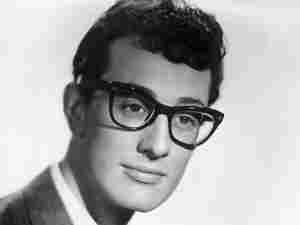 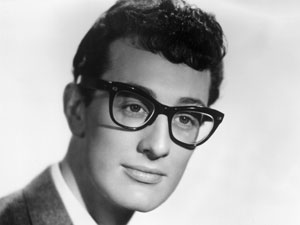 Jerry Allison recalls being nervous recording under the strict rules of famous Nashville producer Owen Bradley. He says it contrasted greatly with the laid-back attitude of Norman Petty, who'd recorded some demo tracks for them in a small studio he ran in Clovis, N.M.

After the tense sessions in Nashville, the musicians decided to record exclusively with Petty, and the results of that relaxed atmosphere were immediately evident.

In between short tours of the region, The Crickets' members spent most of their time at Petty's studio. They worked long hours, sometimes sleeping there overnight rather than make the 100-mile trek back to Lubbock. Sullivan says Petty was a perfectionist, in spite of the imperfect conditions.

"When you hear those recordings, you're hearing one of the cleanest, crispest sounds ever," Sullivan says. "And it's amazing that he did it in Clovis, N.M., next to a highway that ... Frequently, we were interrupted by trucks passing because [of the] rattling windows."

It was during one of those sessions in the summer of 1957 that Buddy Holly, bassist Joe Mauldin, rhythm guitarist Sullivan and drummer Jerry Allison began to work out one of their biggest hits.

"Buddy had a song started called 'Cindy Lou,' " Allison says. "I think he had a niece named Cindy Lou, or Cindy, but it was sort of like, 'Cindy, oh, Cindy / Cindy don't let me down.' That Harry Belafonte kind of feel. 'Cindy Lou, Cindy Lou / Oh, how my heart yearns for you, oh, Cindy.' "

Sullivan says Petty was not impressed.

"Norman says, 'Well, that cha-cha beat isn't going to work,' " Sullivan says. "He says, 'You're going to have to do something else,' and that's when Buddy said, 'Jerry, why don't you try paradiddles? It'll give us a four-four beat. We'll speed it up a little bit.' "

A paradiddle is a basic practice pattern for a drummer; it involves rapid strokes, which create a rolling sound. Allison agreed to the modified rhythm, and suggested one more change.

"I had a girlfriend at the time named Peggy Sue, so I talked him into changing it to 'Peggy Sue,' and then we finished it with a different feel," Allison says. "You know, like the straight 8s, kind of, 'If you knew / Peggy Sue.' "

The result creates a relentless rhythm that keeps rolling at the listener. Petty accentuated that effect by playing with the reverb.

A Sense Of Joy

"They kind of used the studio in the '50s the way people like The Beatles started to use it in the '60s," guitarist Marshall Crenshaw says, "which was a sort of combination laboratory and playground."

Crenshaw, who was 4 when he first heard Buddy Holly, says he was hooked by the energy in the music.

"There's a real sense of joy in almost everything that he ever recorded," Crenshaw says. "And everything about those records appealed to me when I was a kid, the way he played the guitar. You know, he'd just make the whole thing ring, you know, and it just sounded very celebratory and just made me really happy and excited."

But for all the guitar technique, all the percussive experiments and Holly's unique hiccup style of singing, Allison says there wasn't any master plan to be on the cutting edge of anything.

"Nah, we just hoped somebody would buy our records so we could go on the road and play," he says.

On The Road With Peggy Sue

When they took "Peggy Sue" on the road, Sullivan says the reaction was electrifying.

"We were in Idaho. Of all places to break a song was in Idaho. Those kids jumped up and went crazy with 'Peggy Sue,' and we don't still know — I mean, the ones of us remaining still wouldn't be able to tell you if it was the song or it was the combination of songs, or kids just needed an outlet. But whatever it did, it worked."

And not because of the lyrics, either.

"When you listen to that song," Allison says, "tell me what in the world — why anybody would buy a song with those lyrics. But it's the interpretation that comes across and that driving rock, and it just bites you, you know?"

Since its release, the song has sold more than 5 million copies. But Buddy Holly had no idea just how long the music that he helped create would last, and it seems he didn't really think it should, as revealed in a 1957 interview with Canadian disc jockey Red Robinson.

Red Robinson: What do you think about rock 'n' roll music? How long do you think it will last: another six months, seven months?
Buddy Holly: Oh, possibly, yeah.
Robinson: Think after Christmas things may change a bit, then?
Holly: It might pick back up, but I really doubt it. I'd prefer singing something a little more quieter anyhow.