Accessibility links
'Stardust' Carmichael's timeless melody came to him one night while in school at Indiana University. 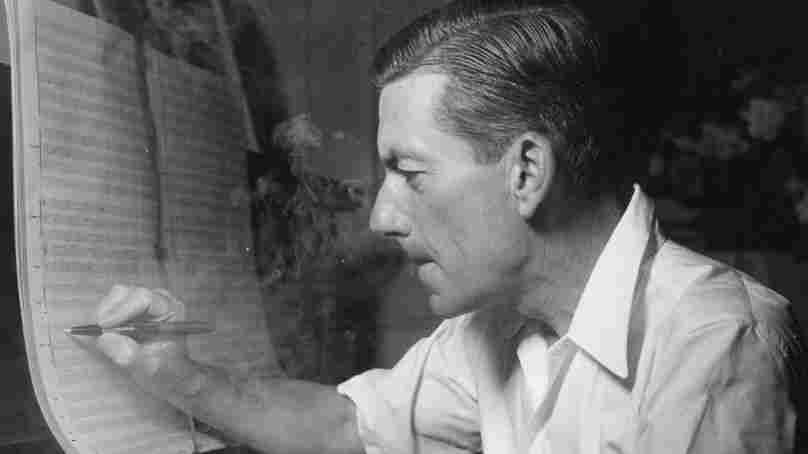 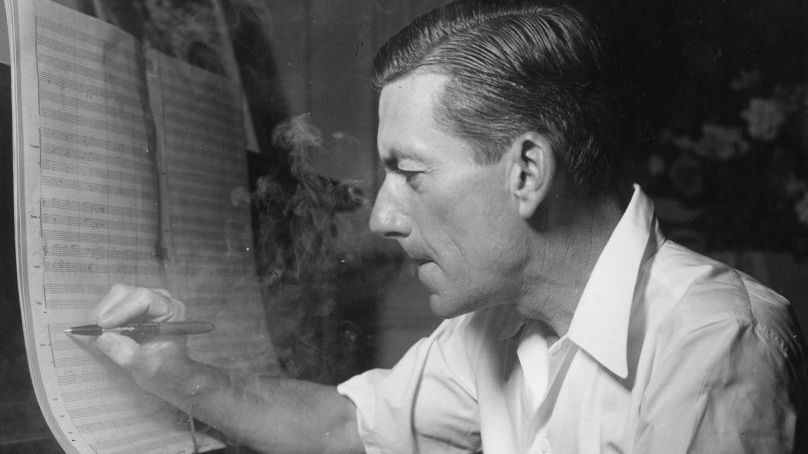 Composer and singer Hoagy Carmichael writing music on the piano in his London hotel room.

In 1927, Charles Lindbergh flew solo from New York to Paris. President Calvin Coolidge announced he would not run for re-election. A tube of Pepsodent toothpaste cost 50 cents. The hit songs of the day were "Old Man River" and "Bill" from the musical "Showboat." And in 1927, Hoagy Carmichael wrote a melody that would become one of the greatest hits of all time, "Stardust."

Hoagy Carmichael, lanky and slouched at the piano, usually with a cigarette hanging on his lip and squinting up to avoid the smoke. Hoagy Carmichael loved singing "Stardust." So did America and the world. In France, it's "Et Toi D'Amour," in Mexico, "Pol Vo Deus Treis," in Japan, "Suta Ada Suto." "Stardust" has been recorded almost 2,000 times. Eleven years after it was written, it was such a staple that it figured in one of radio's most historic broadcasts.

"Ladies and gentlemen, following on the news given in our bulletin a moment ago, the government meteorological bureau has..."

"In a few moments, we will take you to the Princeton Observatory at Princeton, New Jersey. We return you until then with the music of Raymond Rockello and his orchestra."

Hoagland Howard Carmichael was 28 when he wrote "Stardust." In high school he'd fallen in love with the hot jazz of the '20s. Cornetist Bix Beiderbecke was a hero. At Indiana University, Carmichael formed a student band, quit school to make music, went back to school, got a law degree, practiced briefly in Florida, then went home to Indiana. He told the BBC how this tune came to him.

"Well, I got the idea just walking across the campus one night, my university campus where I went to school. I'd just left the college hangout called the Book Nook, and I started whistling, and I whistled this opening strain of "Stardust," and I knew that I had something very strange and different.

"Stardust" rambles and roams like a truant schoolboy in a meadow,' Oscar Hammerstein wrote. But composer Hoagy Carmichael almost forgot it. On campus that night, he rushed back to the Book Nook to tinker on the piano there, worked a bit more on the tune the next day. A few months past, Carmichael said, then a childhood friend came to visit.

"And so one night, he said, `Hoag, play that tune you wrote about six or eight weeks ago.' I said, `What tune?' He said, `I just thought so.' He said, I'll show you.' He went over to the piano with one finger, he went dung, dang, dang, dun, ba, da, da, da. I said, `Oh, that. Yeah.' Would you believe that I'd almost forgotten "Stardust" in that six- or seven-week period, and if he hadn't have played it, I might never have continued with the song. Now that's something that's never been written about or told."

Hoagy Carmichael's "Stardust" did not begin as a lush romantic Sinatra ballad, nor did it have lyrics. Richard Sudhalter, whose biography of Carmichael will be published by Oxford University Press, says when the composer wrote "Stardust," he had his jazz hero in mind.

"His intention in writing this tune was to capture in the form of a melody the essence of a Bix Beiderbecke cornet song."

Thinking of Bix, Hoagy Carmichael hired a bunch of musicians working around his hometown, Indianapolis, and recorded "Stardust" for the first time on Halloween in 1927. Band leader Isham Jones and his arranger Victor Young turned "Stardust" into a ballad, and the legend began. In Harlem, Duke Ellington and his band played it at the Cotton Club. So did Cab Calloway. New York music publisher Irving Mills decided the tune needed lyrics. America was standing around pianos singing in those days. In 1931, Mills got a young staff lyricist named Mitchell Parish to write words for "Stardust."

"He was up from Louisiana. He was born in the South and moved to
New York as a young man and took his chances on being a lyricist," says Mr. Sudhalter. "Signed on, as people did those days, with a publishing house--in this case, Mills--and was a kind of lyricist for hire. Any melody that got thrown at him, he would add a lyric."

"It's a beautifully written piece of work, just a terrific piece of work." says Robert Pinsky, poet laureate of the United States for the last three years. Pinsky says Mitchell Parish's lyrics have wonderful poetic moments and words like `dusk' and `consolation' make it melancholy. But are the lyrics poetry?

"Oh, what is it, poetry? I don't know if it's really important to worry at that question. There are things that--even the title, "Stardust," I mean, begins and ends with the same consonant sound, and that consonant cluster of S-T comes back in, `Love is now the stardust of yesterday.' Stardust is the stars when your love is new and each kiss is an inspiration, which I think is one of the best phrases in popular music. Then after it goes away, there's a little dust left, a little glitter for what was bright. I guess stardust is to the stars and to ecstasy as after you've had a really good candy bar, there's a little chocolate dust on the paper."

Mitchell Parish's lyrics give singers a glorious song, but the music isn't easy to sing. It twists and turns and challenges the voice, because the melody didn't come from Tin Pan Alley or Hollywood where songs were written to be sung. "Stardust" sounds like something a jazz soloist might have invented, which is why so many jazz players take it up.

In 1940, Artie Shaw and his orchestra recorded it and sold a million copies. By then, it was a standard. All the big bands had "Stardust" in their books. World War II gave the song a different context. Love and loss became the theme of popular music, separation and memories of love. After the war, Artie Shaw's band recorded "Stardust" again.
"If you sing out the phrases bar by bar, two or four bar, episode by episode, you can kind of feel them coming out of a horn," Mr. Pinsky says. "It's so cornet-like, trumpet-like, that it kind of jumps out at you. Bud Freeman, the famous saxophone player, put it very well. He said, `Carmichael's songs are the only songs on which you don't have to improvise much, because the improvisation is already in them.'"

In 1978, more than 50 years after this song was written on a college campus in the heartland of the nation, a popular country singer introduced it to new generations. Today, people who never heard of Isham Jones or Artie Shaw or even composer Hoagy Carmichael know his work thanks to Willie Nelson. "Stardust," an American song of longing, dreams, desires, still stretches across the decades to touch the spirit of anyone who hears it.