Accessibility links
'Wildwood Flower' The song was passed down from generation-to-generation, without the benefit of the written word.

As arranged by A.P. Carter and performed by the Carter Family 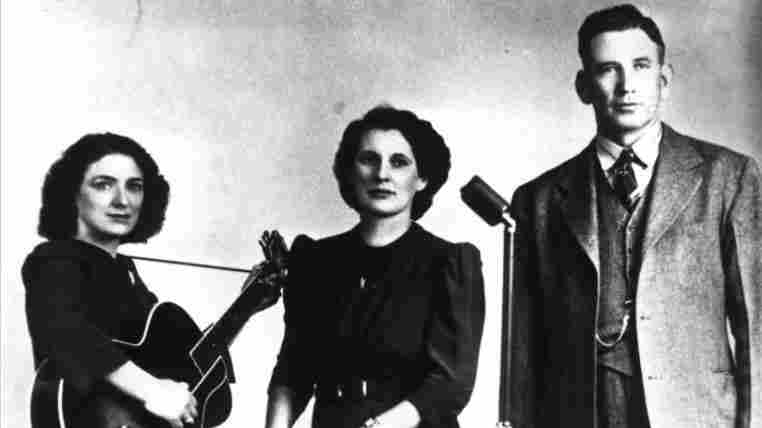 The Carter Family Courtesy of the artist. hide caption 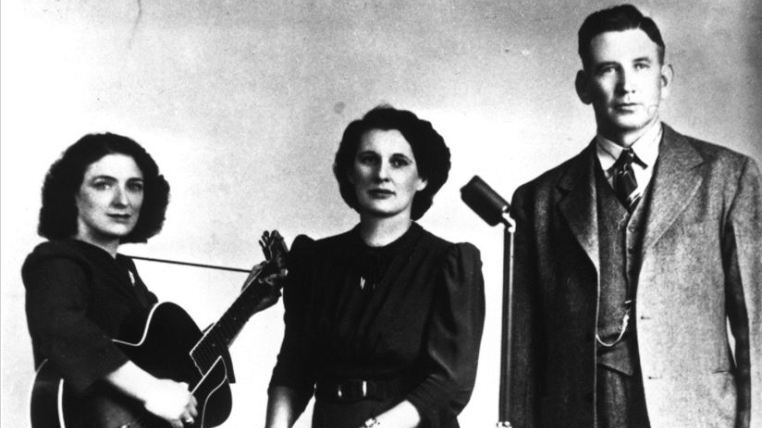 In 1928, the Carter family from Poor Valley, in southwest Virginia, traveled to an industrial suburb of Philadelphia and recorded a half-remembered song that was nearly 70 years old. Dick Spottswood is a record producer and a music host on member station WAMU in Washington. He says "Wildwood Flower" may not belong on the list at all.

"Well, that's because it first appeared in 1860 as 'I'll Twine Mid the Ringlets,' by Maude Irving, whose words were joined to a melody by New Hampshire composer J.P. Webster. It was briefly popular at the time and became part of Southern oral family tradition that let a lot of old songs live on."

The words are sung by a true, pale wildwood flower, a spurned faint-hearted but brave Victorian maid who vows to laugh despite her tears. The melody, with its little trip up and down the scales, proved more memorable. And it was handed down from mother to daughter in the Carter family until they finally put it on record in 1928. Maybelle Addington Carter picked the lead guitar. Her cousin and sister-in-law, Sara Dougherty Carter, played guitar behind her and sang.

Now you might notice that the words don't make a whole lot of sense. And that's because "Wildwood Flower" was passed along by word of mouth from one generation to the next without the aid of the original poem.
`I'll twine mid the ringlets of my raven black hair' became `Oh, I'll twine with my mane, golden weeping black hair...'

Some of the vocabulary was a little arcane so the Carters tended to keep the sounds of the words while losing their meaning. Maybelle Carter made no bones about it.

"My grandmother knew I was louder and I believe--and one time or another I think some of the words have kind of gotten mixed up till--they are supposed to have been something else or they got--because they don't make too much sense in a few places, you know, in the song."

Not that it mattered much in the long run because the compelling element on the record turned out to be the attractive way that Maybelle presented the melody on her guitar.

The record was made on May 10th, 1928 on Maybelle's 19th birthday. Yes, she was a May belle, the youngest of the three performing Carter family members, along with Sara and her husband, A.P. They made hundreds of records together until 1941 when Sara and A.P. retired. Then Maybelle began to perform with her three daughters as The Carter Sisters and Mother Maybelle. They were members of the Grand Ole Opry in Nashville when they made another version of the family favorite in 1953.

"Wildwood Flower" became a favorite piece for fledgling guitarists who taught themselves to play it by ear on mail-order instruments. The song's garbled words tended to fall away when it acquired status as a country instrumental standard. Super pickers Hank Thompson and Merle Travis had both been weaned on Carter family records. When they tossed off a version together, it reached number five in the 1955 country charts.

And you just knew it had arrived when Nashville comic Don Bowman gave it a send-up in 1964.

"Stuff grew wild in our yard back home so we never give it much thought," Bowman joked. "We guessed it's weeds or some kind of flowers. We didn't know what it was called. Then one day I was standing there talking, reached down for a weed to chew on, things got fuzzy and then they got blurred and then everybody was gone."

"Wildwood Flower" wasn't the only song bequeathed to us by the Carter family. There was also "Wabash Cannonball," "Gold Watch and Chain," "Faded Coat Of Blue," "Will the Circle Be Unbroken," and dozens of others. They were hits then and standards now, mostly due to the Carters' honest, eloquently straightforward versions. And "Wildwood Flower" stands at the top of the list, perhaps the finest of the songs that the singing Carter family of Poor Valley, Virginia, rescued, transformed and immortalized.