Accessibility links
Can Ya Dig It? Still Down With 'Shaft' Shaft had the moves because his music had the grooves, the music of Isaac Hayes.

As performed by Isaac Hayes 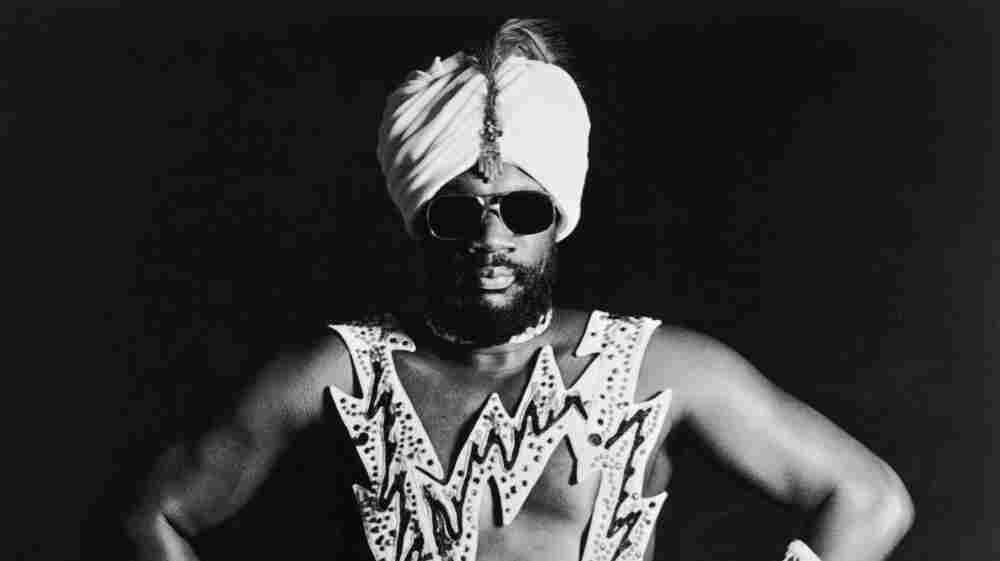 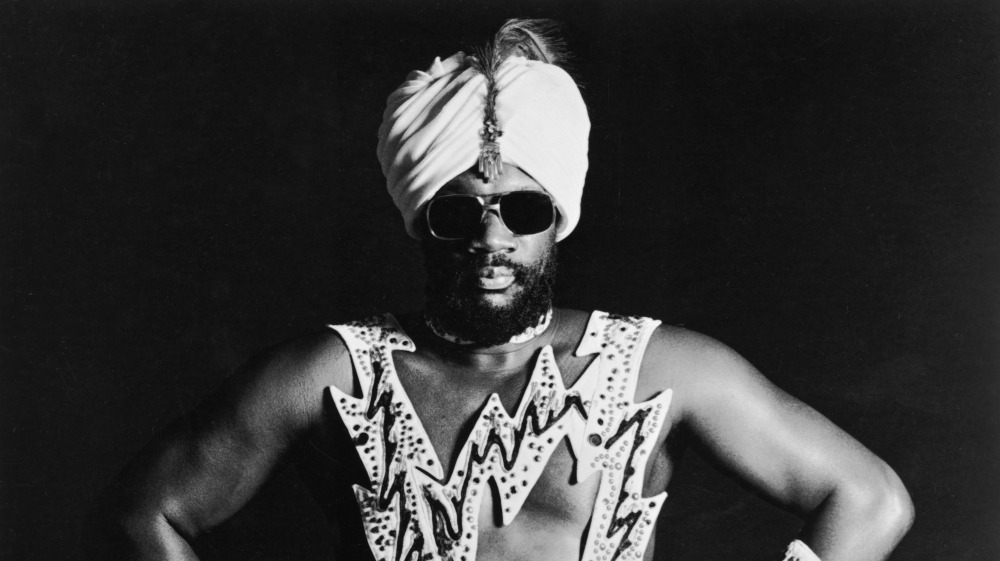 Today, Aug. 20, 2012, would have been Isaac Hayes' 70th birthday. We celebrate the man with the golden voice with the story behind "The Theme from Shaft."

In the late 1960s, vocalist and keyboardist Isaac Hayes wrote a series of hit songs for the famed Memphis label, Stax, with his partner Dave Porter. In 1971, Hayes was asked to score the classic movie Shaft, which went on to become famous for its in-your-face protagonist and for the music that punctuated and nearly completed every frame.

From the relentless cymbals to the funky "wah-wah," the opening bars of "The Theme from Shaft" speak to the urgency, heat and insistence of the film's hero: John Shaft, private detective. Before there was Shaft, though, there was director Melvin Van Peebles' homage to the macho man in the independent film Sweet Sweetback's Badasssss Song.

The film's success as an indie release made mainstream movie studios take notice. It was 1971 and the Stax house composer and low-down vocalist Isaac Hayes was hot and sought after having sold millions of records. "They wanted to have a black leading man, a black director and a black composer," Hayes recalls. "So since I was Stax's number one artist at the time, they chose me."

Hayes Got The Shaft

In 1969, his album Hot Buttered Soul went to number one, with stretched-out renditions of "By the Time I Get to Phoenix" and "Walk On By." Primarily, Hayes wrote for others or performed other people's songs, but with "Shaft," that all changed. The music was entirely his, and as he told director Gordon Parks, Hayes would have preferred it be his even more.

"Well, I wanted to do the acting, so I asked him, 'What about trying out for the leading role?'" Hayes says. "He said, 'OK. But, remember, you've got to do the music.' So, anyway, I came back home. I didn't tell my friends about the movie score. I was telling them about the leading part: 'I'm going to have a shot at the leading part,' you know. And about two weeks had passed, he said, 'Ike, have you gotten a call yet?' I said, 'No, they didn't call me yet.' So I started calling. I asked, 'Whoa, what happened to the leading role?' They said, 'Oh, didn't you know, Mr. Hayes? They just casted a guy by the name of Richard Roundtree for the lead role.' 'What?' 'Oh, but, Mr. Hayes, you promised to do the music.' 'OK, all right.' Well, anyway, I went on and did the music, and, of course, you know how it turned out. It turned out, hey, a big, big plus, big win for me."

Not that it was an easy feat. Even though it was Gordon Parks' first feature film, he was already an experienced composer and guided Hayes throughout the process, which was mapped out in a 2000 HBO special about Parks.

"Gordon Parks sat down and talked to me about the character, because I'd never scored a movie," Hayes remembers. "He said, 'Isaac, just remember, when you write this music, zero in on the lead character, on his personality. He's a roving kind of character. He's relentless, and your music has to depict that.' So that's when I got the idea for these high hats, you know, and made—the guitar and all that stuff and everything else followed.

"The sequence we saw this morning: Times Square panned down off the skyscrapers along 42nd Street of the marquees. And when Shaft pops up out of that subway, that's when this should really come on and carry him all the way through Times Square, right to his first encounter."

"If the music follows the action on the screen, you might have to put some funny bars in it and everything," added Mr. Hayes. "That's the way I did it. But everybody thought I was being hip, but I was just following the action of the character."

For some of those flourishes — special touches that made Shaft the music as much a part of the man as his turtlenecks and leather jackets — Hayes recycled material from other successes. He'd worked with Otis Redding on "Try a Little Tenderness," their last session together for Stax. York University music Professor Robert Bowen elaborates on this connection between Stax and Shaft in Isaac's music.

"Everybody knows that 16th-note, hi-hat ride pattern that one hears at the beginning of Shaft and throughout Shaft. It becomes one of the cliches of disco music. Don't blame Isaac for that. He actually lifted that from a break in an Otis Redding record from 1966. So that's one little kernel that comes from an earlier source, if you will," Bowen says.

It's the rhythm that drives Shaft, which Hayes laid that down first. He then went on to score the rest of the film before coming back to finish the theme. The impact of Shaft extends well beyond the notes to the text.

"Yeah, the lyrics was—I was trying to describe this guy," Hayes says. "You know, 'Who's the black private dick, that sex machine to all the chicks?' Or, you know, I was kind of getting away with little sexual connotations, but nobody could rap me for it because it was good. And then I did a self-censoring thing, too. That became the phrase of that decade. 'Yeah, man, he's a bad mother.' 'Shut your mouth.' I heard old people say that, you know. So it was good. It was right on time. Everything was."

Then there's that all-girl chorus. Hayes calls it seductive — the sundae on top of the cherry. The oh-so-slow way the song builds has been compared to lovemaking, good lovemaking.

"You cannot get there too quickly. You have to — don't be anticlimactic. It's like foreplay. You've got to start off and just — you know, you can't put bread in a cold oven, you know? You got to take your time, you got to heat it up, so that's what I like to do with my music. I like to build it and build it into a maddening, exciting crescendo."

There's even some gospel influences in Shaft, too. Hayes started singing in the choir at the age of four. He was brought up by his grandmother in Covington, Tennessee, where he was born on August 20th, 1942. With Shaft, Hayes took everything he had, mixed it up and created a sound for the '70s.

"We hear the influence of Shaft in all of the Kenny Gamble-Leon Huff productions at Philly International," Professor Bowen says. "That means The Spinners, The O'Jays, The Trammps, MFSB. We hear it up at Motown. A very, very different use of strings following Shaft. We certainly hear it on Stevie Wonder's recordings. We hear it on Marvin Gaye's recordings. I don't think there's very much black music in the 1970s that wasn't affected by Shaft."

Artists not associated with soul or disco appropriated "The Theme from Shaft" as their own — Henry Mancini recorded it; as did The Ventures and Sammy Davis Jr.

When John Singleton did his remake of Shaft in 2000, Hayes also did a remake of the old theme changing nothing. Hayes figured the "kids," as he called them, don't know the old version, though what they probably do know about him stems from his role on South Park as the singing advice-giving Chef.

Three decades after its release, the song, like the detective, still has sex appeal. Some say Hayes is — or should have been — John Shaft, and that's what made the music so powerful, so certain.

"What it did, it made a lot of guys want to be Shaft, and it made the hip person to be Shaft. So it was all about Shaft."

In those disco '70s, Shaft was more, way more, than a mirrored ball or the right threads. Shaft had the moves because his music had the grooves, the music of Isaac Hayes.