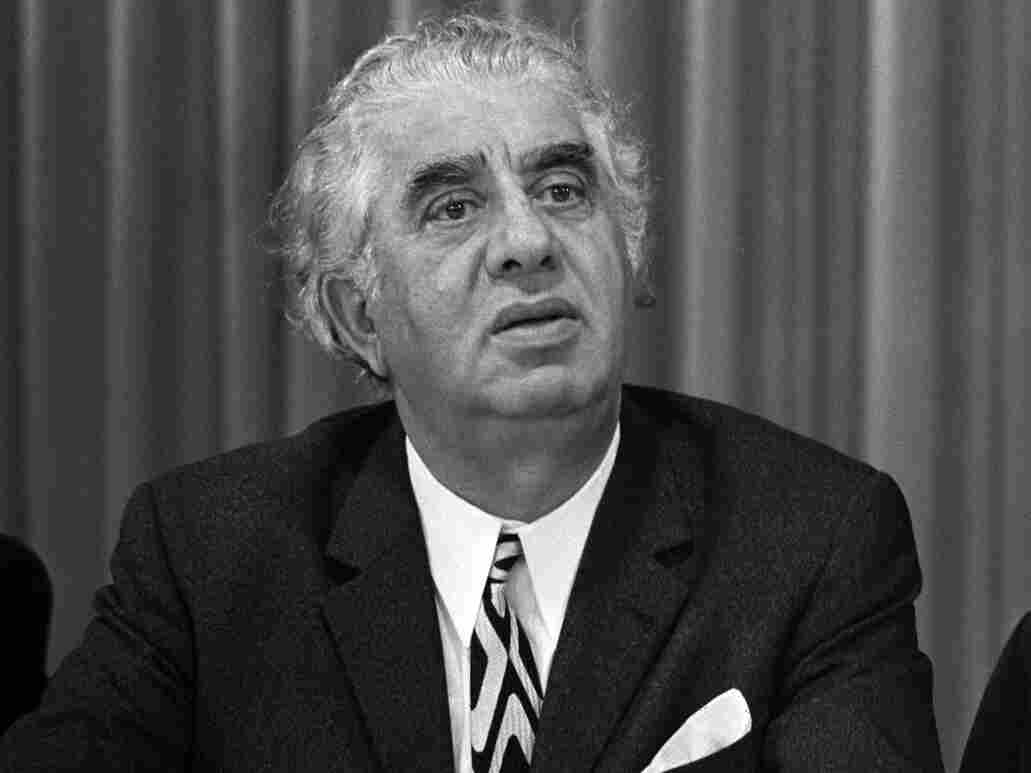 It was one of the catchiest, most familiar — perhaps most maddening — tunes to come out of the 20th century. It was heard in cartoons. It heightened the drama of plate spinners doing their shtick on the Ed Sullivan Show. In celebration of the 100th anniversary of composer Aram Khachaturian's birth, NPR's Tom Huizenga profiles the man behind "Sabre Dance."

The song was part of the Armenian composer's Gayane ballet, which he completed in 1942. A few years before he died, in 1978, Khachaturian told friends he was glad his work was widely accepted and still alive. "I hope it will live on for decades to come," he said.

It's the kind of music that makes you smile. It makes me smile. I feel good about it. It communicates. That's the most important word, I think. If music communicates, it will survive.

In fact it did live on, covered by such diverse performers as jazz great Woody Herman and rocker Dave Edmunds.

"But there's more to Khachaturian than the pulsating jabs of the 'Sabre Dance'," Huizenga says.

Khachaturian came of age as a composer during the Stalin regime. Though he wasn't considered a party apparatchik, he was swept up in the fervor of the new socialist dream.

Khachaturian churned out well-crafted, party-pleasing compositions such as the "Song of Stalin," "Ode in Memory of Lenin" and a popular violin concerto. But in 1948, Khachaturian suddenly found himself on the wrong side of the Soviet art police — officially denounced, along with fellow composers Dmitri Shostakovich and Sergei Prokofiev.

Khachaturian apologized and even agreed to be sent back to Armenia to be "reeducated." In 1957, four years after Stalin died, Khachaturian was re-appointed to the Composer's Union. But by then, "all his major works were behind him," Huizenga says.

For the last 50 years, orchestras have largely avoided Khachaturian's music, a fact lamented by Marin Alsop, music director of the Colorado Symphony.

"He's a very underperformed composer and I think somewhat underrated as well," Alsop says. "His music, of course, has a little bit of the edginess of the 20th century sound, the dissonances coming in. But at the same time it marries this beautiful neo-romanticism and lush orchestration and the over-the-top approach, so I think he can be quite relevant these days."

But Khachaturian is making a comeback of sorts. Alsop and the Colorado Symphony recently teamed up with French pianist Jean-Yves Thibaudet to revive the composer's Piano Concerto. And this fall at Carnegie Hall, a few musicians plan to put on a belated birthday concert, coinciding with the release of a new documentary about the composer.

Pianist Sahan Arzruni is confident that besides "Sabre Dance," Khachaturian pieces like the Piano Concerto will live on. "Because it's the kind of music that makes you smile. It makes me smile. I feel good about it. It communicates. That's the most important word, I think. If music communicates, it will survive."