Accessibility links
Buena Vista Musician Compay Segundo, 95, Dies Segundo, a member of the internationally famous Buena Vista Social Club, was known for his unique styles of singing and playing the guitar. According to producer Ry Cooder, Segundo's style was much more than Cuban; it was informed by his wide knowledge of and experience in music. 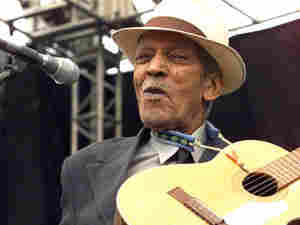 Cuban composer, singer and guitarist Compay Segundo died in Havana Sunday. He was 95. Segundo gained worldwide fame as the frontman for the group of musicians who played in the documentary Buena Vista Social Club. The album won a 1997 Grammy for Best Tropical Latin Performance. NPR's Melissa Block speaks with music producer Ry Cooder about Segundo's life and legacy.