Accessibility links
Listen To Aretha Franklin's Career-Spanning Interview With 'Morning Edition' The Queen of Soul discusses her music, including her classic hit "Respect," her career and how she spends her time.

The power of Franklin's voice endures decades after debut 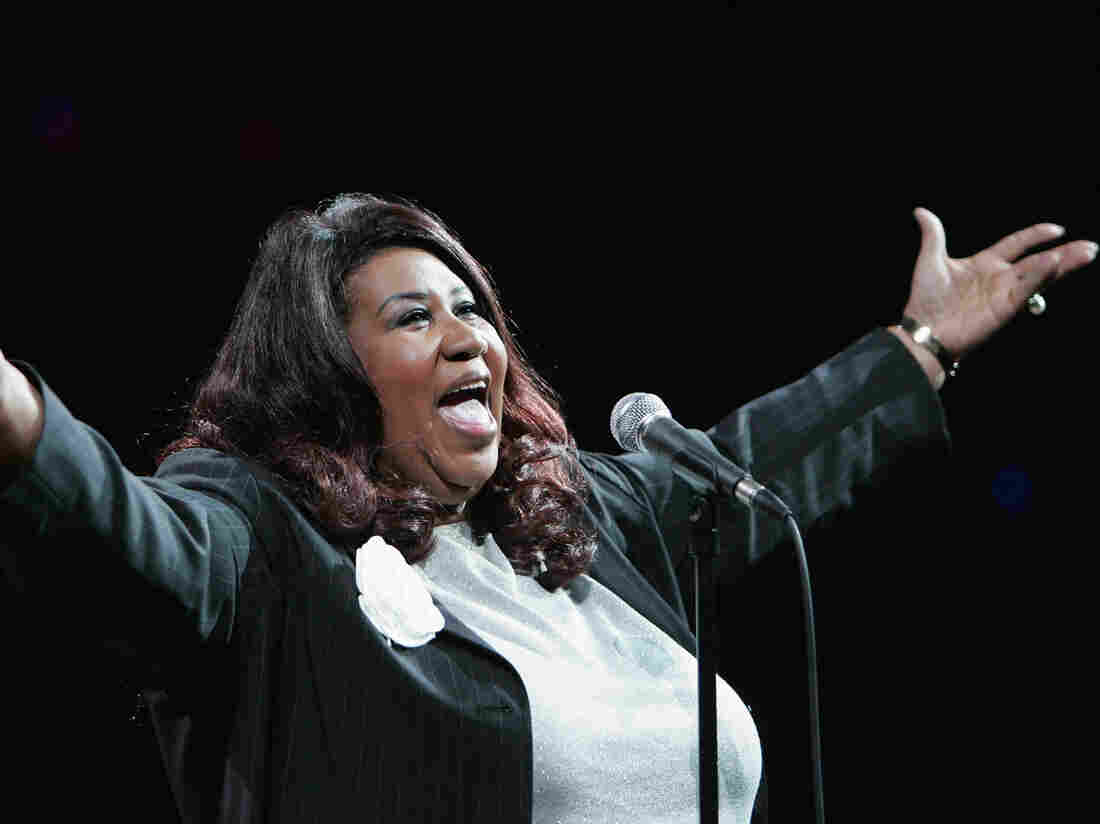 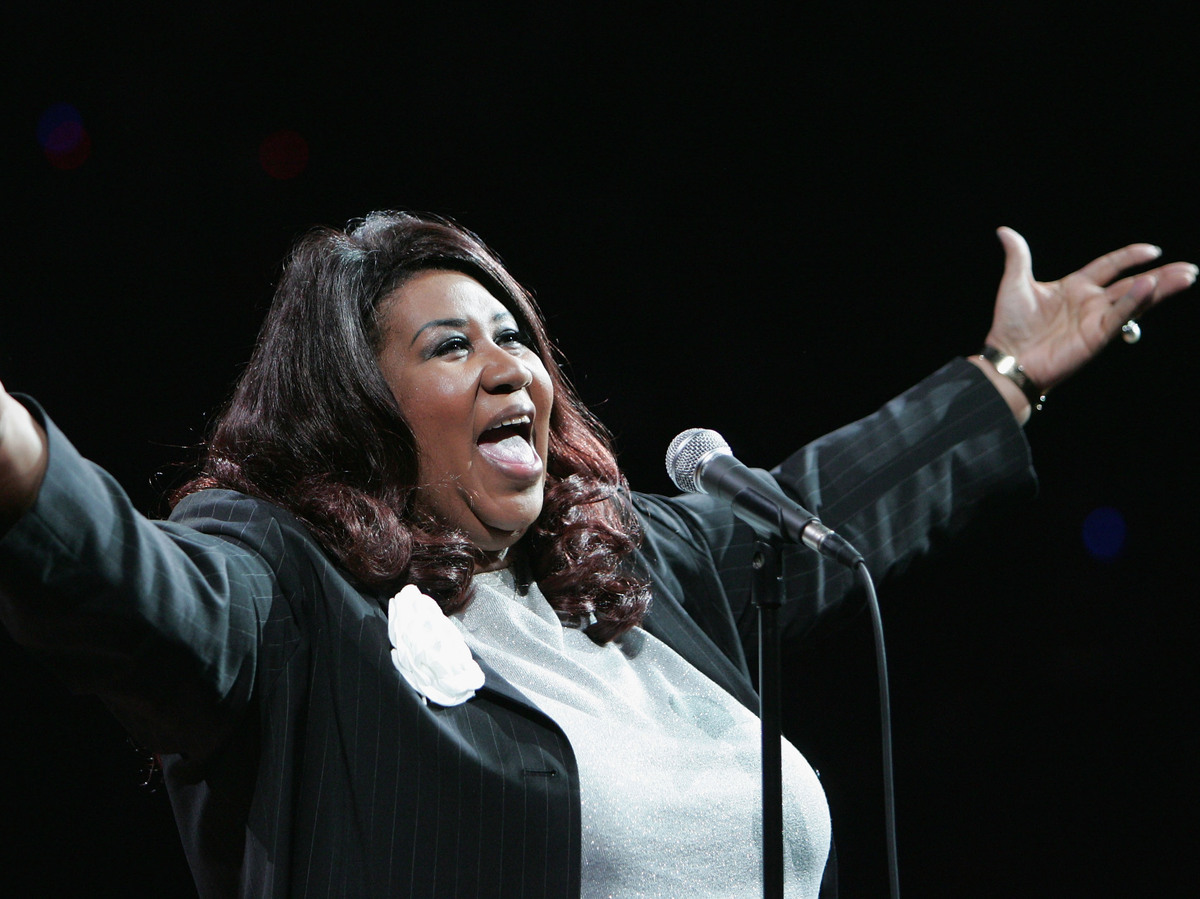 Aretha Franklin sings the National Anthem at the NBA Finals in 2004, in Auburn Hills, Mich.

In the world of the arts, few judgments are without debate, but one fact seems universally accepted: Aretha Franklin is the queen of soul.

Franklin's not one to let her past hits speak for her, as NPR's senior correspondent Juan Williams discovered when talking with Franklin. She still performs and records, and has released her 38th studio album, So Damn Happy.

In October, Aretha Franklin added to the long list of her artistic honors that include more than a dozen Grammy Awards, a Kennedy Center Honor and being the first black woman to appear on the cover of Time magazine. This time, the first woman inducted into the Rock and Roll Hall of Fame was given a spot on the BET Walk of Fame. But at 61, Franklin has started to talk about retirement — sort of.

"It just means that I'm scaling back on the number of dates that I do annually," she explained. "Not retiring, never retiring, just scaling back. That's all."

Her most recent album, So Damn Happy, has been another critical success for Franklin, although it has not flown out of record stores.

Franklin's biggest commercial success came in the 1960s. At a time when the carefully orchestrated Motown Sound had produced Diana Ross and The Supremes, Aretha Franklin's music arrived with a more sexual, bluesy sound. Her breakthrough hit was "I Never Loved A Man (The Way I Love You)," which featured Franklin playing piano and her sisters as the backup singers. A succession of classics followed, including "(You Make Me Feel Like) A Natural Woman," "Chain of Fools," "Respect," and "Think."

Those are among the songs people request most often in concert, Franklin explained. "On occasion, I hear that some of them helped them get through the service, the war. And I'm delighted by that," she added.

"'Respect' came at such an era in American life in the '60s, that for black people, for women who were battling for respect, it became an anthem," Williams told Franklin.

"It was a battle cry of a sort, but we've always had respect in certain ways," Franklin said. "We kind of demand respect."

In her musical life, Aretha Franklin never had to struggle for respect, but her personal life was another story, according David Ritz, who helped Franklin write her autobiography. When she was 6, her mother left her father, the powerful Reverend C.L. Franklin.

"She grew up in her father's church, and instantly he saw she was a prodigy," Ritz said. "She could, as Smokey Robinson once told me, they could all go to the upright piano and pick out little notes, but Aretha was the only one, when she was 8 or 9 or 10 years old, who could sit down at the piano and actually play whole chords."

"I want to take you back to Aretha Franklin at age 9," Williams asked Franklin. "Your daddy put you on a little box and he had you singing. You remember that?"

"We were at church and there was a little footstool there," Franklin recalled. "Someone found a footstool in the office and put it there on stage for me to stand on to sing because they didn't feel that I would be seen. I was so small."

In church or on stage, Franklin's voice was enhanced by something else she learned at church: the ability to connect with an audience. She made her first record at age 12. By the time she was 19, she had a contract with Columbia Records. At Columbia, she was given the chance to record some of her own songs, including "Without the One You Love," one of the first songs Franklin wrote. 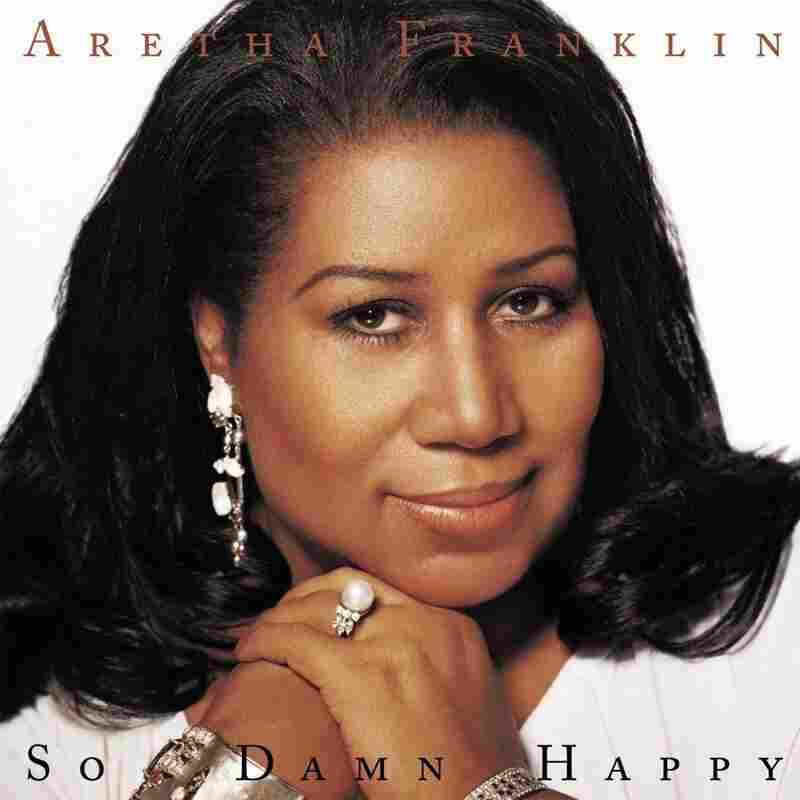 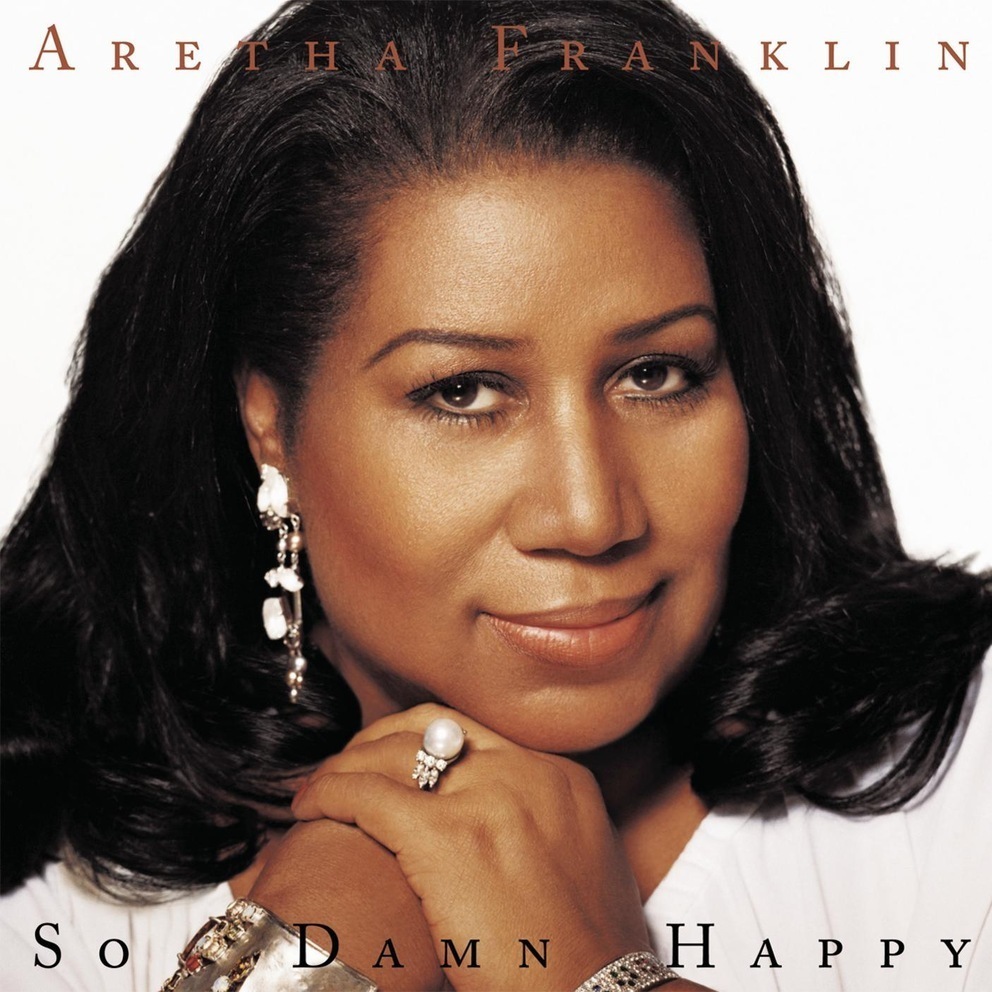 Franklin spent six years with Columbia, but she didn't hit her stride until she switched to Atlantic Records and worked with producer Jerry Wexler. He knew what to do with her voice. He took her south to work with a mostly white Memphis studio band.

By the mid-1970s, as disco reigned, Franklin's string of hits slowed. Her personal life also hit some bumps. Her father was shot by robbers in 1979. He spent years in a coma and never recovered. The other men in her life gave her no end of grief. She had two of her four children by age 17, and two turbulent marriages that both ended in divorce.

But Franklin survived the bad relationships, the death of her father and years of smoking two packs of cigarettes a day to rise back to the top of the pop charts. In 1985, she released Freeway of Love, her best-selling album in nearly 20 years.

Franklin continued to record through the mid-'90s, but the No. 1s were replaced by Franklin's standing as the diva of divas. She sang at Dr. Martin Luther King's memorial service and at the inauguration of two presidents. Plus, she more than filled in for an ailing Luciano Pavarotti at the 1998 Grammy Awards ceremony, with her own soul-infused version of Puccini's aria "Nessun Dorma."

Franklin's voice is not what it was, but it remains powerful. Today, she lives outside Detroit. Now there is a studio in her home so she does not have to expose her voice to the cold weather before singing.

"Usually at home, I sit around at the piano and I compose sometimes," she said. "Other times, I'm just playing."

"And when you think about the craft of singing today, as your voice changes, is it a different craft?" Williams asked Franklin. "Is it the same craft? Are you emotionally in a different place?"

"I don't want to be dissected this morning," Franklin countered. "This is too heavy for me in the morning, please. Everything is just what it was. That's just who I am, I'm a very creative and artsy kind of person."

In the audio, we say that Aretha Franklin performed at Martin Luther King Jr.'s funeral. In fact, she performed at his memorial service.