In late 1966, Beach Boys legend Brian Wilson created what some consider his most glorious single ever, "Good Vibrations." For a long time thereafter, all was silence and rumors. In fact, Wilson was working quietly with lyricist Van Dyke Parks on what he hoped would be his magnum opus, a vast, abstracted suite called Smile. 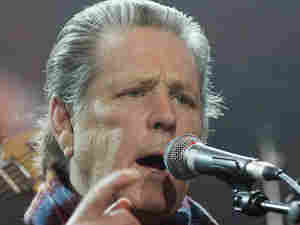 But some of his fellow Beach Boys were vehemently opposed to any deviation from what had become their lucrative signature sound. Wilson — depressed, drugged out and increasingly out of touch with reality — scrapped the project and became a recluse.

Still, fragments from Smile sessions surfaced on Beach Boys albums and a raft of bootlegs. Over the years, those in the know have hailed the work as an imaginative breakthrough. Now, nearly four decades later, the public is finally getting a chance to hear the most celebrated album never released. Wilson is taking a 45-minute concert version of Smile on a European tour. Reviewing the London premiere, a critic for The Guardian called it "the grandest of American symphonies." Tim Page reports on the history of Smile.