Accessibility links
Simon And Garfunkel, The Interview Simon and Garfunkel made some of the most memorable music of the 1960s and '70s. They are back together on tour, performing old favorites and a new song.

Old Friends, Back on Tour, Recall Origins of Their Songs

As part of the Present at the Creation series on the origins of cultural icons, NPR's Don Lee tells the story of how some unlikely ingredients were mixed together to make The Graduate, a movie that changed American cinema.

Listen to the segment.

Simon and Garfunkel made some of the most memorable music of the 1960s and '70s. They're back together on tour, performing old favorites and a new song, "Citizen of the Planet." On Weekend Edition Saturday, NPR's Scott Simon conducts a rare interview with the musical duo. 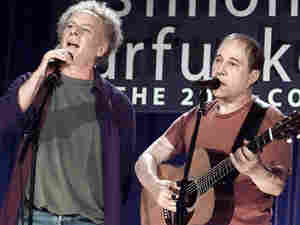 Paul Simon and Art Garfunkel reminisce about how they met in grade school (in a production of Alice in Wonderland). A year later, they were singing doo-wop together, caught up in the rock-and-roll craze.

Simon remembers how his singing partner inspired his own interest in music. Garfunkel "was the most famous singer in the neighborhood. In fact, it was Artie's singing in a talent show when we were in the fourth grade that prompted me to try singing."

Initially, their musical aspirations were unsuccessful. By the time they were in high school, Garfunkel remembers, they were ready to give up on their dream. In 1957, in a last-ditch effort, they plunked down $7 to record a demo of "Hey Schoolgirl." The song, which they performed under the name Tom and Jerry, became their first hit. They were 15 years old.

In the interview, Simon and Garfunkel discuss the origins of some of their greatest songs — including "Sound of Silence" and "Bridge Over Troubled Water" — and they explain how they've dealt with recurring tensions in their 50-year friendship.

Citizen of the Planet [*]