Accessibility links
'Hidden Kitchens' Calling A few months back, we asked NPR listeners to submit their tales of how communities come together through food. From chickens roasted in a shipyard welding-rod oven, to pralines made in a prison cell, we air your stories to mark the start of the new series Hidden Kitchens. 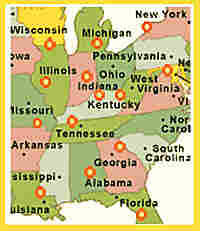 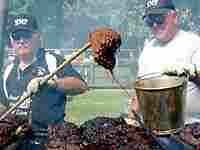 Eavesdrop on calls we received from listeners:

A Nod to True-Blooded Louisiana Cajuns

Sharing Cooking and Culture with a Boston Brahmin

A Teacher's Observations on What High Schoolers Eat

How a Shipyard Can Become a Kitchen

Iowa's Puckerbrush Potluck, in Memory of a Lost Colleague

Chickens are roasted in welding-rod ovens in a working shipyard. All-night burgoo (a spicy stew of meats and vegetables) simmers over campfires in Kentucky, just as it did more than 100 years ago. A cook for NASCAR calls from the racetrack to tell about his world. A man makes pralines in the makeshift kitchen of his Louisiana prison cell.

Hundreds of listeners called the Hidden Kitchens hotline, responding to our quest for stories of neighborhood kitchen traditions and local kitchen visionaries.

Our "Curator of the Quest," Jay Allison, presents an array of messages from around the country to launch this new Morning Edition series.

In the course of producing this segment, Allison found a hidden part of his own family's story:

"Speaking of turtles, my mother told me that my great grandfather, who was governor of Delaware, kept terrapin turtles in the basement of the governor's mansion as the main ingredient for their fashionable Terrapin Soup.

"Before state dinners, the cooking staff would go into the basement to turn over the requisite number of turtles on their backs for a few days to soften the meat. Not exactly a 'blood feast,' but kind of hidden and creepy."

Cornelia Lambert called to tell us how her grandmother Ruby used her cooking skills to build community.

This piece was produced by Jay Allison, with production support from Viki Merrick and Chelsea Merz of Atlantic Public Media and public radio stations WCAI and WNAN for Cape Cod, Martha's Vineyard and Nantucket, NPR's Neva Grant and The Kitchen Sisters.