Accessibility links
In Evolution, a Taste for Beauty Has a Purpose An appreciation for beauty may play a vital role in evolution. Female bowerbirds, for example, choose mates based on the aesthetics of their mating dance. Human behavior is more complex, but scientists say our love of beauty has also helped us survive. NPR's Christopher Joyce reports.

Listen
In Evolution, a Taste for Beauty Has a Purpose 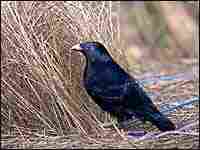 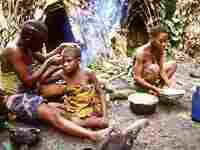 Watch a male bowerbird seduce a female with an elaborate flap-and-chirp display:

One of the fundamental rules of evolution is that an ability or trait that helps survival or reproduction — such as a sharper beak or a bigger brain — is likely to be passed on from generation to generation. But as NPR's Christopher Joyce reports, a desire and appreciation for beauty may also offer a competitive advantage in life.

From the CD Mbuti Pygmies of the Ituri Rai

According to biologist Gerry Borgia of the University of Maryland, the female bowerbird chooses a male based on how much she likes the bower he builds. The bower is a two-sided, stick-and-mud enclosure on the ground just big enough for the two of them. It's not a nest for eggs — it's a setting for seduction.

Females are attracted by the decorations on a bower and the beauty of the male's mating display. Males that can perform elaborate displays are often the ones with well-developed genetic systems, says Borgia. They attract more females and pass their genes on to more offspring.

Human behavior is much more complex, but even something as purely beautiful as music may have helped people survive, says Penn State University anthropologist Pat Shipman. She says early human groups may have used rhyme and music to pass on important information. Mbuti Pygmies living in Congo still use music for such purposes.

"It's been shown quite convincingly that rhymes, repeated rhythm, sometimes repeated melodies do help embed information in your brain," Shipman says.

From Microscopes to Large-Scale Sculpture Oct. 11, 2004