Story Note from The Kitchen Sisters 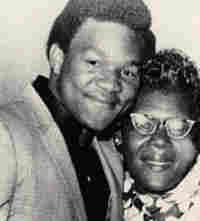 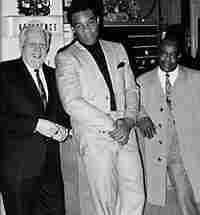 This story snuck up on us. We heard from Margaret Engel, managing editor of the Freedom Forum's Newseum in Arlington, Va., and co-author (with her twin sister Alison) of Food Finds: America's Best Local Foods and the People Who Produce Them, about her idea of the ultimate hidden kitchen: the George Foreman Grill. We weren't quite on her wavelength. Then she explained.

So many immigrants, homeless people and others of limited means living in single-room occupancies (SROs) have no kitchens, no legal or official place to cook. To get a hot meal, or eat traditional foods from the countries they've left behind, they have to sneak a kind of kitchen into their places. Crock pots, hot plates, microwaves and toaster ovens hidden under the bed. And now, the latest and safest appliance, the appliance that comes in so many colors it looks like a modern piece of furniture: the George Foreman Grill. It is, quite literally, a hidden kitchen.

Hear calls related to this story we received from listeners:

How Stews Filled a Hungry Childhood in N.J.

We had never considered such a hidden kitchen, or the issues around it, in quite this way. We bet that George Foreman hadn't, either. So we called him. The stories he told us — about growing up hungry and angry — were stunning.

This story also led us to the streets. We called our colleague, Steve Edwards at WBEZ, to see if he could help us locate any hidden grills in Chicago. He contacted The Chicago Coalition for the Homeless, which in turn put us in touch with Jeffrey Newton. Jeffry has been homeless or in shelters most all his life, from boy's homes, to reformatories, to prison by age 17. Then he moved out on the streets, where every day he goes "trailblazing" — looking for food, shelter, work, the resources he needs to make it through the day.

Jeffry learned to cook from his grandmother. He feels an urge to cook, especially for other people — under the overpass on Chicago's Wacker Drive; on a George Foreman Grill plugged into a power pole; with a hot clothing iron to toast a grilled cheese sandwich.

We also called Glide Memorial Church in San Francisco's Tenderloin District. We knew they would know. They offer a stunning array of services to the poor, to those in recovery, to those needing assistance, both spiritual and physical.

Pat Sherman lived for quite some time in SROs with no kitchen, where cooking was forbidden. She now has a home and works in Glide's walk-in program. Sherman — whose recipe for "Hidden Beans & Rice" is linked to above — was quite ingenious when it came to cooking. Her Crock-Pot doubled as a pencil holder and a flower pot — nothing that would arouse suspicion. When nobody was around to check, she would slow-cook her beans while she went to school, then come home to a hot meal.

This tip about the George Foreman Grill gave us a new vantage point to think about hunger and poverty — and made us look at life on the street through new eyes. -– The Kitchen Sisters

Foreman on How Growing Up Hungry Fueled His Boxing Career

Only Available in Archive Formats.
Oldfields.org