Accessibility links
From Microscopes to Large-Scale Sculpture For sculptor Kendall Buster, there is no distinction between art and science. Trained as a microbiologist, she explores the forms and landscapes seen in a microscope lens through her giant sculptures. NPR's Neda Ulaby reports.

Listen
From Microscopes to Large-Scale Sculpture 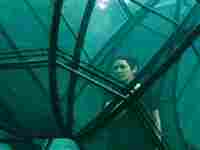 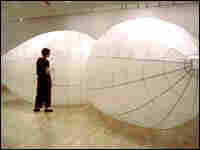 Kendall Buster with one of her sculptures at the Sitelines and Suitors exhibit at the Kemper Museum in Kansas City, Mo. Fusebox, Washington, D.C. hide caption 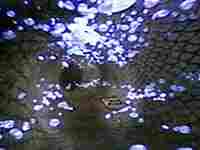 For sculptor Kendall Buster, there is no distinction between art and science. Trained as a microbiologist, she explores the forms and landscapes seen in a microscope lens through her giant sculptures.

Buster gives NPR's Neda Ulaby a tour of some of her works and shows how artists and scientists ask similar fundamental questions about what we see and know. It's the latest report in Morning Edition's series on the intermingling of art and science.

Outside the Kreeger Museum in Washington, D.C., is a giant green bubble sculpture by Buster called "Garden Snare." It's so big, one can walk inside. The sculpture's "skin" is heavy greenhouse netting. Depending on the sunshine, it's darkly opaque — or as clear as green glass. Buster says in that way, it tends to evoke a living, dividing cell.

After studying microbiology in college, Buster worked as a lab technician in a hospital, peering through a microscope at the disks of red blood cells. And she imagined she was entering that small world.

"There's a point where you almost feel like you're in that space, particularly when you're doing a lot of work over a period of time. At least for me, you sort of lose consciousness of the apparatus... you're actually moving through a landscape."

Buster soon began to draw that landscape of cells, clots, tissues and stains. She found microbial objects that cause infections "quite beautiful" to look at under the microscope.

Buster wanted to give substance to that beauty. She went to art school, where her drawings bloomed into sculptures. Now Buster sees herself as both artist and scientist, and she isn't sure where one begins and the other ends.