Accessibility links
Lydia Mendoza, Queen of Tejano Lydia Mendoza, queen of Tejano music, began her legendary career singing in the plazas of downtown San Antonio with the chili queens in the 1930s. She shared her memories with The Kitchen Sisters for Hidden Kitchens. Read an excerpt from Mendoza's autobiography.

The music and songs Lydia learned as a girl were passed on to her primarily by her mother. Some she learned from bubble gum wrappers, where music publishers had placed them with the hope of making them popular and successful. Lydia learned her most famous song, "Mal hombre," when her father took her to see a musical show at a theater. Lydia already had the text of the song in her collection of bubble gum wrappers, but she had finally heard the melody to go with the lyrics! Music soon became the main tool for survival, not only for Lydia, but for the whole Mendoza family.

Memories of Mendoza's Start as a Young Singer in the Plaza

Lydia Mendoza, queen of Tejano music, began her legendary career singing in the plazas of downtown San Antonio with the chili queens in the 1930s. She shared her memories with The Kitchen Sisters for Hidden Kitchens. Below, read an excerpt from Mendoza's autobiography: 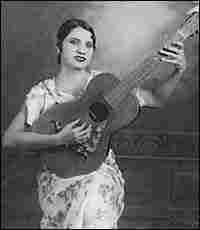 Lydia Mendoza began her singing career in the plazas of downtown San Antonio in the early 1930s. hide caption

"When we got back to San Antonio in 1932, the first thing we did was take part in some concursos, singing contests, that were going on at the Teatro Nacional. They were sort of like amateur music contests: mostly for children. The man who was in charge was a very good friend of Papa's. So Papa went over there when we got to town, and he told his friend, "Look, I've got this little group here, they're my children, could they possibly enter the contest?" "Sure, of course, lots of people are taking part in these contests," Papa's friend told him.

Mostly young boys sang or played in those contests. There was one girl, however; I remember because she was playing a twelve-string guitar. We entered the contest, and I wanted to do some of my songs by myself, to sing them alone. The guitar that we had was a six-string, and it sounded real bad –- it was a very old one. So, Papa asked that girl if she would lend me her twelve-string so I could sing a song. However, that girl didn't want to loan it to me, because she thought that she was going to win.

All of the groups came out singing in turn, and then I went out with my violin, and my sister Maria with the mandolin and my other sisters: Panchita, with our old six-string guitar. Manuel played the triangle and Juanita danced; she was only five years old. We won the first prize, which was a five dollar gold piece! That was the money we used to settle ourselves in San Antonio.

It used to be open air, and there used to be some chili queens down there. They sold menudo and chili and all that sort of thing. At night, there used to be a whole bunch of people singing. So we set up our chairs, and we sat right there and started singing, too. Then we used to pass the panderta around. Believe it or not, we used to make enough money there to pay the rent and buy clothing and food and everything.

There were a lot of groups in the Plaza, but they were all men. We were women; we were the only women singers — my mother, my sisters and I. We were also the only group that was a family. There were more than ten groups all spread out through the open area of the Plaza. They'd just be hanging around, playing dice at the tables; waiting for someone to turn up. There was an entrance through the middle of the Plaza where cars could come inside and stop at the edge of the table where the hot food was sold.

"Can I sing for you? Do you want to hear "La Adelita?" Can I sing "Rancho Grande" for you?"

Times were hard, and those musicians all made their living the same way we did, just from what people would give them. Everybody was chasing after the centavos in those days.

-- Lydia Mendoza, from A Family Autobiography

Used by permission of Chris Strachwitz and Jame Nicolopulos.

More Stories Along the Road