Hear Selections of the Night's Music All Week at NPR.org 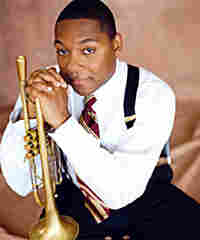 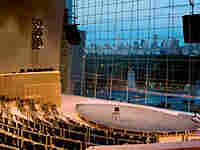 In a companion broadcast with PBS, NPR presents "One Family of Jazz" — the opening-night gala concerts at Lincoln Center's Frederick P. Rose Hall, a new state-of-the art home for jazz in the Time Warner building on New York's Columbus Circle. 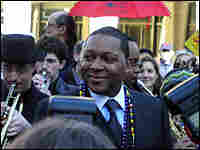 It's hard to avoid the past when standing in the new Jazz at Lincoln Center facilities.

I think about all the jazz pioneers who played in less than adequate bars and nightclubs while they steadfastly moved the music forward.

I think about musicians we now revere having to enter nightclubs and hotels through service entrances in order to play, having to find places to sleep with local friendly families who opened their homes to traveling jazz musicians.

The new facility, with such a prestigious place in the Manhattan skyline, is a monument to their epic contributions and indomitable spirit.

The music performed this night is also an aural "thank you."

Who knows what Dizzy Gillespie would have thought looking out over Central park from the bandstand in the room named for him?

Pianist Charlap is a well-considered choice for the intimacy of the 140-seat Club. His subtle stylings would have been right at home in any of the venues that used to crowd the block a bit farther south, on the famed 52nd street jazz strip. And trumpeter Jeremy Pelt, 29, will christen the room with the youthful spirit of the next generation.

While Tony Bennett may have famously lost his heart in San Francisco, he's sure to feel better hearing himself in the new 1200-seat Rose Theater.

Bennett's voice and his presence in New York are joyful reminders of the art of jazz singing as it developed after World War II. His recent popularity with the MTV crowd is a testament that good taste transcends generations. A performance by this quintessential New Yorker is like being greeted at the door by an esteemed and hospitable host.

Vocalist Abbey Lincoln's performance marks the presence of the pioneering spirit of jazz. It's easy to forget that the music we often consider comfort food for the soul was at one time a challenge to the status quo.

Abbey Lincoln was — and still is — an innovator, stylist, rebel and provocateur. Her appearance on the bill is a reminder of the total realm of jazz expression.

Latin jazz has often been called the perfect union and the Lincoln Center Afro-Latin Orchestra is a living example.

The ensemble is expertly guided by pianist Arturo O'Farrill, the son of legendary composer/arrange Chico O'Farrill, himself one of the principal architects of the sound that changed the world in late 1940s New York.

That sound was made by with the bands of Machito, Tito Puente and Tito Rodriguez in ballrooms across all five boroughs. The blaring trumpets and the snap of the congas will be felt by the ghosts of the dancers at Broadway and 52nd, the site of the storied Palladium Ballroom.

That corner represented a true cross-fertilization of cultures and brought together two manifestations of the African diaspora.

Finally, Wynton Marsalis's vision of a Family of Jazz is manifested in his performance with his own family: father Ellis Marsalis and brothers Branford, Delfeayo and Jason. Members of the Lincoln Center Jazz Orchestra have also invited their musically inclined parents to help inaugurate the new House That Jazz Built.

It's an appropriate gesture. Jazz is a common language that people in West Africa can share with someone from Philadelphia, for instance.

Whether you're listening in Fresno or Buenos Aires, you are part of an effort to move our human culture forward by sharing in the emotion of jazz. And after listening to the great opening night concerts at Lincoln Center, you are now also part of history.

Artists on the Web

Live music audio from the Jazz at Lincoln Center Opening Gala concerts has been taken down in accordance with music copyright agreements.