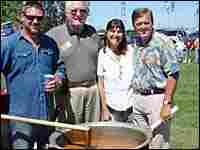 Standing around the BBQ pot at a union-sponsored picnic in Owensboro, Ky. From left: A member of the IBEW union; Everett Thompson, a candidate for the Kentucky House of Representatives; Nikki Silva of The Kitchen Sisters; and state Sen. David Boswell. hide caption 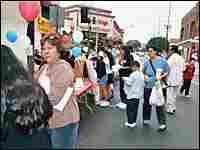 Kentucky State Sen. David Boswell on the Politics of Picnics

To feed the faithful, national politicians write many checks to caterers at big hotels. There's plenty of limp salad, rubber chicken and cold coffee on the campaign trail.

But in local races across the country — for councilman, judge, prosecutor and the like — the food is often prepared by the candidate's wife or mother, the union local, or the part-time crab chef who hooks a steamer to the back of his van.

Some events are political fundraisers. Others are community gatherings that a good politician can't afford to miss. Morning Edition's series Hidden Kitchens hits the campaign trail to investigate the politics of campaign cooking.

"Most politicians are late getting to any event, so you have to have something that holds for two or three hours. The bigger the politician, the later they come." — Ken Bosley, Moonlite Barbecue restaurant, Owensboro, Ky.

Margaret Engel, managing editor of the Newseum, was the person who first told us about how George Foreman grills had become popular kitchens for immigrants and the homeless. In the same conversation, she also told us about her love of food — and the years she spent as a politician's wife, cooking her way through campaigns.

"I was a political wife for eight years," Engel told us. "My husband was on the county council, and the first thing I did when he told me he was running for office was buy a food processor, because I knew I'd have to be feeding large quantities of people. The name of the game in political food is 'How inexpensively can we feed the faithful?'

"Because you are so grateful to volunteers, but you are also trying to raise money. The typical political gathering, I've come to find out, is a table in the center with liter jugs of soft drinks and open bags of potato chips. Anything you can do to improve on that will make you quite popular with the volunteers."

While gathering sound for next week's story on burgoo gatherings in the South, we visited the International Brotherhood of Electrical Workers' annual picnic in Owensboro, Ky. There, politicians were shaking hands, chasing votes and eating mutton. As a Kentucky state senator and an IBEW union member tell us in the audio stories at left, there's a strong tradition linking politics and picnics in Davis County.

For more on political food, check out a recent article for The New York Times Magazine titled "More Pie, Mr. President?" In it, writer Jack Hitt offers an illuminating look at the symbolism — and hypocrisy — of campaign-trail food.

About the Music in This Story