Accessibility links
Interviews: Priceless Afghan Treasures Recovered More than 22,000 objects from the rich cultural history of Afghanistan have been found safe in vaults in downtown Kabul, surviving a generation of war and looting.

More than 22,000 objects from the rich cultural history of Afghanistan — including exquisite ivory statues, medallions from the summer palaces of kings and 2,500 years' worth of gold and silver coins — have been found safe in vaults in downtown Kabul. 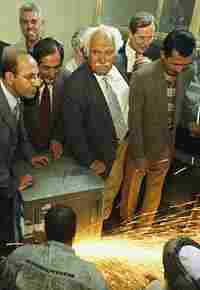 National Geographic fellow Fredrik Hiebert, who led the inventory project with support from the National Geographic Society and the U.S. National Endowment for the Humanities, tells NPR's Alex Chadwick the treasures are even more remarkable in that they survived a generation's worth of destruction.

"By the end of the Taliban's reign, most of us thought there was nothing left — just destruction and despair," Hiebert says. The Kabul Museum, for example, stood at the front lines in the nation's civil war in the early 1980s. It was bombed and repeatedly looted by local fighters. When the Taliban took control, religious fervor led to the destruction of countless artifacts representing the influence of other religions in the region, including the March 2001 destruction of two giant Buddhas carved into the sandstone cliffs of Bamiyan.

"We were shocked — we weren't prepared," Hiebert tells Chadwick when he learned of the sheer number of artifacts that survived. "We were looking at each other as if some dream had happened... The keys had been lost, the papers had been lost, nobody really knew what was in these boxes — and when we opened them, we found artifacts that had been reported in the news and in the academic world as having been lost, stolen or destroyed."

Afghanistan Minister of Information and Culture Sayed Makhdoom Raheen says the recovery of the museum treasures offers a ray of hope. "This project has been an enormous boost for Afghanistan — finding the treasures intact, and then working with the outstanding team to inventory each one of them, preserving our heritage for our children," he says.