Earlier this year, a group of guards at the Hudson County Correctional Center in Kearny, N.J., allegedly beat up two prisoners — while they were handcuffed, while other guards and their supervising officers watched. The alleged victims weren't regular prisoners — they were immigrant detainees locked up by the Department of Homeland Security prior to deportation. 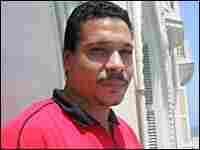 Hemnauth Mohabir also spent time at Passaic County Jail. He talks about the abuse he witnessed there in part 1 of this report.

As NPR's Daniel Zwerdling reports in the conclusion of a two-part investigative series into immigrant detainees, the case of the Hudson County jail suggests detainees who've been mistreated have a hard time getting justice.

To report this story, Zwerdling traveled to two continents, because the immigrants involved in the alleged beatings have since been deported to their native countries.

In Alexandria, Egypt, Sadek Awaed recalled the beating he and another detainee, a Tunisian named Fathi Ganmi, allegedly received from guards at the Hudson jail.

Almost 6,000 miles away in Guyana, former detainee Hemnauth Mohabir — who says he hasn't seen or communicated with Awaed since the incident — told the same story. Names, details and locations all matched. Contacted by phone, Ganmi — now in Tunisia — corroborated key parts of the story.

Medical reports and other documents obtained by NPR support their story. Despite repeated requests from NPR, the jail's director and staff would not discuss the allegations of abuse.

Seeking redress through the courts isn't a likely prospect for immigrant detainees. Few have access to lawyers: Though detained while awaiting deportation, technically they haven't committed a crime, so the constitutional right to free legal counsel doesn't apply.

Legal aid lawyers say they're too overwhelmed to pursue a case against the government. County prosecutors say it's hard to follow up on allegations of abuse, since the alleged victims are often deported before a probe can be completed. Officials at Homeland Security would not confirm whether the department was investigating allegations of abuse at three New Jersey jails that NPR specifically mentioned.

Medical records from the Hudson County Correctional Center indicate both Sadek Awaed and Fathi Ganmi were treated for injuries received on March 1, 2004 — the day the two former immigrant detainees say guards at the jail beat them.

Though the handwriting is difficult to read, the words "chipped tooth" can be made out on this report.

This is the jail medical unit's report on Awaed's injuries. It does not indicate other parts of the body where Awaed and Mohabir say he was beaten and kicked. A lawyer with the ACLU who saw Awaed about a week after the alleged beating says his lips were grossly swollen and his back, legs and arms were covered with bruises.

On Nov. 18, 2004, one day after the first part of our story on immigrant detainees aired, NPR received the following statement from Clark Kent Ervin, Department of Homeland Security inspector general:

"As a result of work already underway regarding various aspects of the DHS' alien detention program, and complaints received by our office, we have undertaken a review, focusing on the treatment of detained aliens. We are looking at various DHS, Intergovernmental Service Agreement (IGSA), and contract detention facilities throughout the country, including New Jersey. We plan to have a report ready for public release by the Spring of 2005."

NPR's Daniel Zwerdling notes that, months after filing them, many of his FOIA requests to the Department of Homeland Security remain unanswered — a noticeable trend with the Bush administration.

The director of the Hudson County jail, Oscar Aviles, declined NPR's requests for an interview. But three months after Zwerdling first called him, Aviles sent this letter. He said Sadek Awaed had tried "to incite a riot" in the jail (not once but twice), and that's what caused the "incident" on March 1, 2004. In the course of his five-month investigation, Zwerdling found no evidence suggesting Awaed had ever been violent. To the contrary, people who knew him in jail described him as a "model" prisoner: kind, soft-spoken, polite.

Zwerdling sent Aviles a letter requesting the "records regarding that incident." Aviles never sent them — nor did he send any other records that NPR requested months earlier.

Read Aviles' Response to the Abuse Allegations at Hudson