Accessibility links
Hunting & Gathering with Angelo Garro Blacksmith Angelo Garro forges and forages, recreating in wrought iron and in cooking the life he left behind in Sicily. The Kitchen Sisters join Garro along the coast of Northern California as he follows the seasons, harvesting the wild for his kitchen. 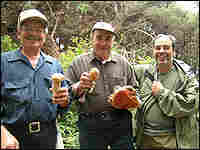 Angelo Garro, far right, stands next to fellow Italian foragers he met while foraging for wild porcini mushrooms along the Northern California coast. "They had better luck than we did," he notes. Bob Carrau hide caption 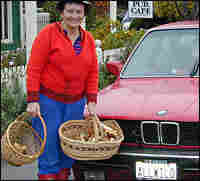 On Sicilian Attitudes Toward Men Who Cook

On Memories of Sicily & Sardines 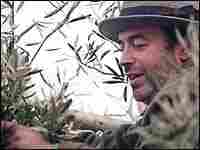 Ethnobotanist Peter Gail gathered wild foods as a child for monetary reasons. He discusses the history of the wild harvesting tradition.

Sometimes it's the kitchen that's hidden, sometimes it's the food itself. Blacksmith Angelo Garro forges and forages, recreating in wrought iron and in cooking the life he left behind in Sicily. The Kitchen Sisters join Garro along the coast of Northern California as he follows the seasons, harvesting the wild for his kitchen and his friends.

The following songs were heard in this story:

· "Tabu," from the CD Nuevo by Kronos Quartet, Nonesuch Records.

· "Confesssa," performed by Adriano Celetano, on the CD Per Sempre (2002), Sony International.

· "Lakme-Viens, Malika," performed by Leo Delibes and the Orchestra of the Opera Comique, Paris.

"I met Angelo Garro nearly a decade ago. Nikki Silva and I were working on our radio story 'Waiting For Joe DiMaggio,' about the return of 'Joltin' Joe' to his parents' village in Sicily. We needed help with some translation, and a friend told us about a blacksmith from Sicily at "Renaissance Forge" — hidden down a little alleyway in San Francisco — who went out hunting and gathering and cured his own olives.

I called him up out of the blue. He translated my Sicilian recordings and invited me to his forge that evening for rabbit and polenta. We were mixing the story and I didn't make it out that night. A few months later my phone rang. It was Angelo: 'Are you coming for lunch or are you coming for dinner?' The next day I spent a rainy afternoon eating lunch by candlelight. Everything was handmade by Angelo: the salami, the prosciutto, the pasta, the ragu, the olives, the wine, even the candlesticks.

I was a vegetarian at the time, so the lunch was tricky. The next week, after returning from hunting, he called to invite me to a wild boar dinner. A few months later, we went foraging for fennel. So began a long friendship of feasting and foraging with Angelo Garro and The Kitchen Sisters."

Notes from Our Listeners

Sharon Boorstin, author of Let Us Eat Cake: Adventures in Food and Friendship, wrote to us about Veronica Williams, a third-generation forager known as the Mushroom Lady.

"Veronica spends every day, except when it's snowing, foraging for wild mushrooms in the forests of southwestern Washington. She drives a mud-spattered red BMW with 'ALL WILD' on the license plate — the name of her mushroom-foraging business, which supplies many of the top restaurants in the region. Veronica refuses to take anyone with her when she goes out to forage, so they won't find her secret spots. It's been said that she dresses her best so that if something should happen to her and people find her body, she says she'll look respectable."

Peter Gail, a Ph.D. ethnobotanist — the "Wizard of Weeds" — called to tell us about the National Dandelion Cookoff. Gail is passionate about informing the public about the value of wild foods. His Web site is edibleweeds.com.

Don Novello, a.k.a. "Father Guido Sarducci" of Saturday Night Live fame, writes: "I just hope there is mention in your story about the Manchester Terriers and toy Boston Bulls (in the Abruzzi and parts of Calabria) that were trained in the beginning of the mid 60s (during the celery wars) to forage for fennel and chicory."

Produced by The Kitchen Sisters. Mixed by Jim McKee. In collaboration with