Listen to 'A Christmas Carol' 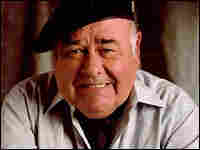 "Marley was dead, to begin with. There is no doubt whatever about that. Old Marley was as dead as a doornail."

So begins A Christmas Carol by Charles Dickens. Some say this short story, first published in 1843, transformed Christmas into a major holiday. Before A Christmas Carol, there was surprisingly little celebration during the Christmas season. After its publication, the holiday became a high point of the year. The tale has inspired movies, operas, readings and countless stage performances around the globe.

Jonathan Winters on the Web