Accessibility links
Bollywood Dance Comes to U.S. Americans are encountering India's Bollywood style on fashion runways and in music videos. But commentator Sandip Roy, an Indian immigrant, isn't sure what to make of the new Bollywood section at his local Blockbuster. 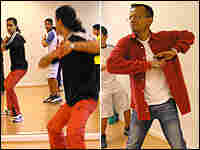 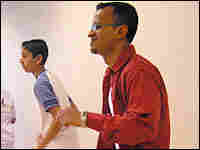 With hundreds of films released each year, a Top 10 didn't seem adequate. Film titles are in italics.

Hear the Songs at Smashits

Americans are encountering Bollywood style on fashion runways and in music videos, and a new Hollywood movie is trying to introduce Bollywood to Western audiences.

While many welcome that trend, commentator Sandip Roy, an Indian immigrant, isn't sure what to make of the new Bollywood section at his local Blockbuster.

India's Bollywood film industry churns out hundreds more movies each year than Hollywood does. Most films from Bollywood — the catch-all name was originally a mix of "Bombay" and "Hollywood" — are chaste romances set in exotic locations and jam-packed with music and dance numbers.

Those songs often take on a life of their own as they're discussed, dissected, rated and traded by fans online. But as Roy says, the dances that accompany them also have their own devotees — and Bollywood dance classes are springing up in the United States.

The subtleties of Indian films may escape casual viewers, Roy says. "Now as Bollywood enters American pop culture, with all its kitsch and camp, I am suddenly the protective parent," he says.

There are challenges to understanding Indian culture through Bollywood, according to Roy: the cheesy subtitles, the flashy costumes. But to a native viewer, it all goes much deeper: "You don't just watch a Bollywood movie — you feel it."

Songs Heard in This Story:

Bride and Prejudice
Bollywood for the Skeptical
Bolly What?