Accessibility links
The Club From Nowhere: Cooking for Civil Rights In the '50s, a group of Montgomery, Ala., women baked goods to help fund the Montgomery bus boycott. Known as The Club from Nowhere, the group was led by Georgia Gilmore.

In the 1950s, a group of Montgomery, Ala., women baked and sold pies, cookies and cakes in beauty salons and on street corners to help fund the Montgomery bus boycott.

The Club from Nowhere, as the group was known, was the brainchild of Georgia Gilmore, a cafeteria worker fired for her organizing efforts. She was one of the unsung heroes of the civil rights era. The Kitchen Sisters and producer Jamie York tell her story. 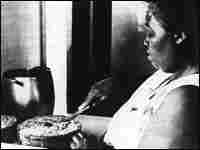 Story Notes: The Intersection of Food and Community

Read culinary historian John T. Edge's essay on how food has helped transform Montgomery, Ala., the so-called Cradle of the Confederacy:

We've been thinking about Georgia Gilmore and The Club From Nowhere ever since John T. Edge, from the Southern Foodways Alliance at the University of Mississippi, called our Hidden Kitchens phone line last year to tell us about her secret civil rights kitchen in Montgomery, Ala. Any woman who could raise money selling pies and cakes out of beauty parlors to buy gas and station wagons to haul people to work during the 1955-56 bus boycott that Rosa Parks triggered was someone we wanted to chronicle. 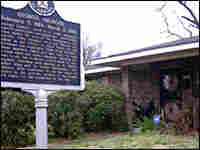 Historian Richard Bailey, who ate at Georgia Gilmore's house as a child, reads the marker outside her home.

Edge and his cronies at the Center for Southern Culture are doing some of the most compelling and imaginative work on the intersection of food and community. They are a deep well of oral history, thinkers who have been a rich resource for the Hidden Kitchens series.

A recipe from the kitchen of Cleora Butler, whose mother fed Cab Calloway and other black musicians as they traveled through the segregated South and Southwest.

Last year, the focus of the Southern Foodways Alliance's annual conference was Race and Food. This year, it's sugar. Their Keeper of the Flame Award for 2004 went to Martha Hawkins, a onetime welfare mother who now runs a restaurant in her home in Montgomery. Hawkins sees her work as being in league with the cooks who fed the civil rights movement and claims Georgia Gilmore as one of her inspirations.

Music of the Movement

Several new freedom songs grew out of the lunch counter sit-ins of 1960 in Nashville, Tenn. They drew upon contemporary rhythm and blues songs and soul music for their commentary on segregation. One such song was "You Better Leave Segregation Alone," performed here by James Bevel & Bernard Lafayette and the American Baptist Theological Seminary Quartet:

From the CD Sing for Freedom: The Story of the Civil Rights Movement through Its Songs, from Smithsonian Folkways Records.

Chris McNair, a photographer in Birmingham, Ala., is someone you should know about. McNair opens his studio (McNair Studio) to the public each Sunday for a buffet breakfast prepared by one of his daughters. His daughter Denise was one of the little girls killed in the bombing of the 16th Street Baptist Church in 1963. For many years Mr. McNair refused to talk about the bombing, but a few years ago he discovered that even young blacks in Birmingham didn't know the history of the civil rights movement. So he has created a "niche" in his studio dedicated to Denise, and he invites the public to come in and learn about the civil rights era, and eat some wonderful food to boot (biscuits, bacon, eggs and some amazing grits, we are told).

About the Music in This Story

The following songs were heard in this story:

4. "Black Woman," by Brownie McGee. From the CD The Best of Harry Belafonte's Long Road to Freedom: An Anthology of Black Music, 2001. Buddha Records.

5. "Rainy Night in Georgia," by Brook Benton. From the CD The Best of Brook Benton, 2000. The Island Def Jam Music Group.

Our co-producer Jamie York traveled to Montgomery to conduct interviews for this story and sends us this note.

"It's impossible to really know Georgia Gilmore without tasting her cooking. I traveled to Montgomery to talk with those who knew her and was lucky to get close. As fate would have it, I mistakenly arrived at the home of Mark Gilmore, Ms. Gilmore's son, at the impolite time of 1 p.m. on a Sunday.

"Mark and his family had just gotten home from church; I felt awful for interrupting their large Sunday dinner. But Mark and his wife couldn't have been more pleased. First I was made to feel welcome, then I was made to feel full. I got some small taste for what it was like to be a guest at Ms. Gilmore's table. While Mark's wife served me sweet potatoes, cornbread, fried chicken, greens and sweet tea, Mark told stories about his mother.

"The short walk from Dr. Martin Luther King Jr.'s home to Georgia's block is as nondescript and historically significant as a Civil War battlefield. It's hard not to think about the potential for change that those few blocks represent.

"I came to talk to folks about Ms. Gilmore's cooking, but I was told repeatedly that, like most people, she was also struggling to raise her children, make a living and support her community. But it is her cooking which remains a touchstone for people in Montgomery when they think of 'the movement.' She elevated her day-to-day work — doing the cooking — into something greater. Anyone lucky enough to have eaten one of her meals associates it with that place and what that time demanded."