Accessibility links
Remembering Bird: A Poem for Charlie Parker Legendary jazz musician Charlie Parker died 50 years ago Saturday. Poet Joe Pacheco recalls one of Parker's last performances, when the saxophonist known as "Bird" played in Manhattan. The poem is from Pacheco's book The First of the Nuyoricans/Sailing to Sanibel. 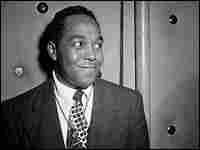 As he helped usher in a new age in jazz, Parker recorded many unforgettable tunes: "A Night in Tunisia," "Ornithology," "Salt Peanuts" and more. His influence in establishing bebop has lasted for decades.

Joseph Pacheco is a poet and a retired New York City school superintendent. He lives on Sanibel Island in Florida. Pacheco's poem is from his book The First of the Nuyoricans/Sailing to Sanibel. 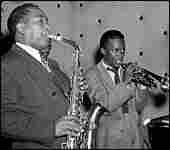 The First of the Nuyoricans — Sailing to Sanibel

that fifty years after

I could still tell you about it

and you still wouldn't really believe me:

It's one 'clock in the morning

and I wander into Montmartre looking

for Tom and Rod so that we can go over

that's ten times stronger than the watered down rotgut

they are serving here in Montmartre

who can't run anything strictly legit,

even when they are trying to cash in

on the bohemian craze

and the success of the coffee houses

who every night pack in tourists

coming to look at us locals

dressed like bums with our long hair, jeans and sandals,

our uniforms of art and protest,

nursing the cappuccino or the stein of beer

while we carry on our business

of bull——ing each other up and down

Rienzi's, Pandora's and the Van are making money

including Tom's place, which is the Café Figaro,

but the guys running the Montmartre

can nurse a drink all night

and try to smoke joints disguised as cigarettes,

which they call "bombers",

so they stop letting the locals sit at tables,

institute (would you believe) a dress code

and now every night

there are fewer tourists to stare

at the handful of better dressed locals

who have bothered to try to make it past Ruffino

the bouncer maitre d' at the door,

who is also my childhood buddy

and who tells me,

"it's slower than Ernie Lombardi tonight,

but something's happening with the jazz guys

in the front." Tom and Rod wave at me,

with the shade up, and I know

it's not a chess move but something real cool and unusual coming down.

Tom points to the musicians, a jazz quartet

Montmartre hired on the cheap,

and they are moving an extra chair onto the stand

and the tenor sax player is handing

And he is going to blow tenor, not alto.

He warms up for a minute with runs and arpeggios

that any sax player would die for

but as a former tenor man

I can tell his tone

is no threat to Byas or the Hawk

and he will thin the tenor into an alto

with his first blow.

The other musicians wait in reverence,

as if they are standing before St. Peter

waiting to be admitted to heaven,

the leader and the Bird nod at each other

and off they fly into Ornithology,

with the Bird trying to teach everyone

just how high the moon was, is, and will ever be

and how high he is now.

He zigs and zags through ins and outs of chords

in quantum leaps of invention,

he follows a two-note "mop mop"

leaving us breathless from listening,

segueing back to the melody

and to the other musicians

who have been happy just to listen,

keep the beat and play the chords

but now with encouraging nods from Bird

they try their own tentative solos

which get more confident as they go along

for now they can tell everybody,

agents, other musicians, their children

and their children's children

that they played with Charlie Parker...

and the room bursts into one great haze

tourists not knowing just where they're at

or what they're listening to,

what's the big deal with this Fatso

and when can we close up,

but Tom and Rod and I and just a few others

inhaling and savoring this hippest

glowing and blowing at the center of the haze

know as we gaze at each other

in the coolest of surmises

that we are living in a moment

and which most of you won't believe

even fifty years after:

a borrowed tenor sax for free

in Montmartre Café in Greenwich Village,

a few weeks before he died.