Accessibility links
Albert Einstein's Year of Miracles: Light Theory One hundred years ago today, Albert Einstein finished a scientific paper that would change the world. His radical insight into the nature of light would help transform Einstein from an unknown patent clerk to a giant of 20th-century science. 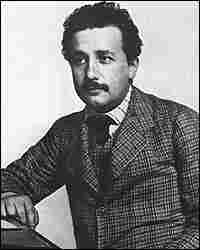 One hundred years ago today, Albert Einstein finished a scientific paper that would change the world. His radical insight into the nature of light would help transform Einstein from an unknown patent clerk to the genius at the center of 20th-century physics.

Scientists call 1905 Albert Einstein's annus mirabilis — his year of miracles. Within a few months, Einstein wrote a series of papers that would transform the way we see the universe. They included his theory of special relativity and the famous equation E=mc².

The first paper described his particle theory of light, which became one of the foundations of modern physics. Just as popular legend has it, Einstein really was a patent office clerk when he conceived his radical theories — but he was also a doctoral candidate who spent his free time debating cutting-edge physics with his friends.

In the March paper of 1905, Einstein directly challenged the orthodoxy of physics: orthodoxy that had grown and strengthened for over a century; orthodoxy that rested on bedrock experiment and far-ranging theory.

All physicists in 1905 knew what light was. Whether from the Sun or an incandescent light bulb, light was known to be a wave; that is, a succession of equally spaced crests separated by equally spaced troughs where the distance between the crests (or the troughs) determined the light's color. All scientists knew, without doubt, that light originated at a source, spread out evenly and continuously through all the space accessible to it, and propagated from place to place as electromagnetic crests and troughs. Light was called an electromagnetic wave or, more generally, electromagnetic radiation. In 1905, the wave nature of light was an established, incontrovertible fact.

In the face of this universally held knowledge, Einstein proposed that light was not a continuous wave, but consisted of localized particles. As Einstein wrote in the introduction to his March paper, "According to the assumption to be contemplated here, when a light ray is spreading from a point, the energy is not distributed continuously over ever-increasing spaces, but consists of a finite number of energy quanta that are localized in points in space, move without dividing, and can be absorbed or generated only as a whole."

This sentence has been called "the most 'revolutionary' sentence written by a physicist of the 20th century."

Einstein anticipated the impact of his paper, In May 1905, before the paper appeared in print, he informed his friend Conrad Habicht that a forthcoming paper on the properties of light was "very revolutionary." From a modern perspective, at least three of Einstein's 1905 papers were similarly innovative, but for Einstein in 1905, it was only the "assumption considered here [the March paper]" that represented a sharp break with established tradition. It was revolutionary at the time and it remained revolutionary. In June 1906, the future Nobel Prize-winning physicist Max Laue wrote to Einstein unequivocally denying Einstein's assumption:

"When, at the beginning of your last paper, you formulate your heuristic standpoint to the effect that radiant energy can be absorbed and emitted only in specific finite quanta, I have no objections to make; all of your applications also agree with this formulation. Now, this is not a characteristic of electromagnetic processes in vacuum but rather of the emitting or absorbing matter, and hence radiation does not consist of light quanta as it says in s.6 of your first paper; rather, it is only when it is exchanging energy with matter that it behaves as if it consisted of them."

Laue was apparently willing to concede that in the emission and absorption process light quanta were involved, but beyond that, he was adamant: light traveled through the vacuum of space as a wave, not as quanta. Laue was not alone in his belief. In 1905, the magnitude of Einstein's departure from the sanctioned belief about light was so unsettling that his particle theory of light was not accepted for two decades. 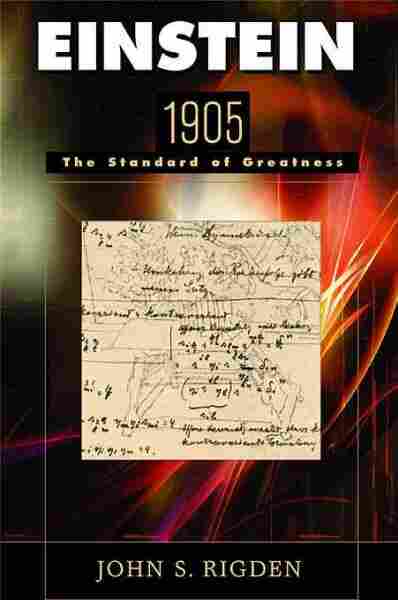 The Standard of Greatness