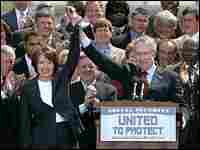 What does American society need from a federal retirement program in the decades to come? Experts debate different approaches.

Social Security: What Do We Need?

Four plans were presented Tuesday on Capitol Hill. Outside, hundreds of union members protested, and some Democratic lawmakers railed against President Bush's proposal of privatizing the entitlement program.