Accessibility links
Ivory-Billed Woodpecker Rediscovered in Arkansas Scientists say a rare ivory-billed woodpecker — thought to be extinct — has been found in a remote nature reserve in Arkansas. The sighting was kept secret for a year, in part to protect the habitat. 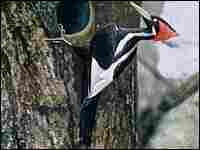 An artist's image of what an ivory-billed woodpecker looks like. So far, naturalists have captured only a fleeting video image of the rare bird in Arkansas. George M. Sutton/Cornell Lab of Ornithology hide caption 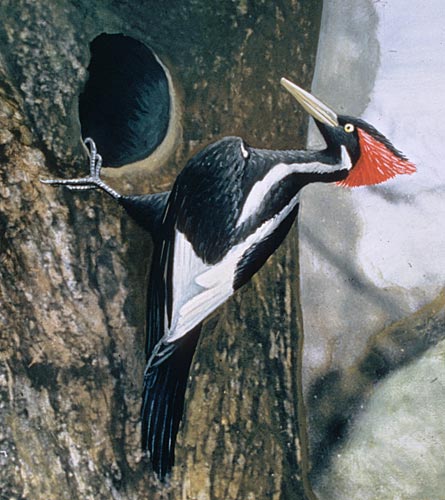 An artist's image of what an ivory-billed woodpecker looks like. So far, naturalists have captured only a fleeting video image of the rare bird in Arkansas. 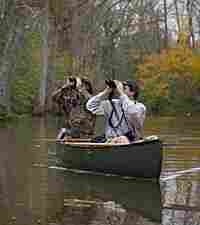 A group of wildlife scientists believe the ivory-billed woodpecker is not extinct. They say they have made seven firm sightings of the bird in central Arkansas. The landmark find caps a search that began more than 60 years ago, after biologists said North America's largest woodpecker had become extinct in the United States.

The large, showy bird is an American legend — it disappeared when the big bottomland forests of North America were logged, and relentless searches have produced only false alarms. Now, in an intensive year-long search in the Cache River and White River national wildlife refuges involving more than 50 experts and field biologists working together as part of the Big Woods Partnership, an ivory-billed male has been captured on video.

"We have solid evidence, there are solid sightings, this bird is here," says Tim Barksdale, a wildlife photographer and biologist.

For an NPR/National Geographic Radio Expeditions story, NPR science correspondent Christopher Joyce joined the search last January along Arkansas' White River, where a kayaker spotted what he believed to be an ivory-billed woodpecker more than a year ago. Many other similar sightings over the last 60 years have raised false hopes.

But this time, Joyce reports that experts associated with the Cornell Laboratory of Ornithology in New York and The Nature Conservancy were able to confirm the sighting. They kept the find a secret for more than a year, partly to give conservation groups and government agencies time to protect the bird's habitat.

The Nature Conservancy has been buying and protecting land along the White and Cache Rivers for years, along with the state and the federal Fish and Wildlife Service. Since the discovery, they've bought more land to protect the bird.

The Future of the Ivory-Billed Woodpecker April 29, 2005

The Nature Conservancy
Cornell Lab of Ornithology
PhillipHoose.com -- Author of 'The Race to Save the Lord God Bird'