Accessibility links
The Decemberists: Steeped in History, Fiction Hear The Decemberists in concert at the 9:30 Club in Washington, D.C. The full performance, along with the opening act, Rebecca Gates, originally Web cast live from NPR.org May 6.

The Decemberists In Concert

Only Available in Archive Formats.
The Decemberists: Steeped in History, Fiction

The Decemberists: Steeped in History, Fiction

The Decemberists In Concert 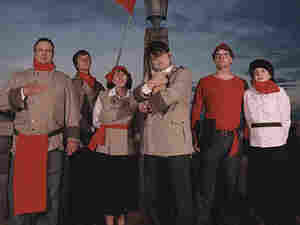 We Both Go Down Together

From My Own True Love (Lost at Sea)

Of Angels and Angles

This show originally Web cast live on NPR.org on May 6, 2005. It's the latest in a new series of live concerts from NPR's All Songs Considered and the 9:30 Club in Washington, D.C. Previous live shows are listed at right.

The Decemberists are an indie pop group from Portland, Ore., known for their fun, clever lyrics steeped in world history and modern fiction. The band is currently on tour to promote its latest CD Picaresque.

Rebecca Gates got her start in the Portland rock group The Spinanes in 1991. Gates later relocated to Chicago where she was involved with the city's underground music scene, working with artists like John McEntire of The Sea and Cake, and Brian Deck of Califone. Gates' debut solo release was Ruby Series in 2001. She's currently at work on a new album.